“With sufficient funds to cover four months’ living expenses, he set out and wrote at an incredible pace, providing eight hundred thousand words. Writing for a wide variety of magazines, he kept more than thirty stories in the mail constantly, not giving up on a story until it had been rejected by at least ten markets

In the process he accumulated almost a thousand rejection slips after five months of effort. During this period, MacDonald worked fourteen hours a day, seven days a week, literally learning his craft and gaining the experience of a decade as he went along, which was important for a man who made no serious attempt to write until he was thirty.”

– Martin H. Greenberg, in the introduction to Other Times, Other Worlds.

That is how John D. MacDonald, thirty years old, fresh out of the military in 1946 and with one published short story (which he actually sent to his wife in a letter: she submitted it to a magazine) learned the craft of fiction writing.

One of America’s finest writers (note: I didn’t qualify that with the word ‘fiction’) set himself upon a course that no sane person would have undertaken in that situation.

Some quotes about MacDonald:

“My favorite novelist of all time.” – Dean Koontz

“…remains one of my idols.” – Donald Westlake

“One of the great sagas in American fiction.” – Robert B Parker (on the Travis McGee series)

You can find a lot more praise for him. MacDonald began writing for the pulps, transitioned to original paperbacks as the pulps died out and ended up a hardcover best seller with an enduring character, Travis McGee.

MacDonald began writing science fiction. In fact, he wrote fifty short stories and three novels, but was done with the genre by the early nineteen sixties. The sci-fi of John MacDonald is the subject of an upcoming ‘Public Life of Sherlock Holmes’ column.

In addition to his science fiction and hundreds of short stories, MacDonald had written almost two dozen paperback originals best categorized as crime thrillers. He sold respectably, but there was no literary recognition of his efforts.

Then, in 1957, MacDonald wrote The Executioners. Published in hardback, it garnered the critical reviews that had bypassed MacDonald for a decade. It was even a book club alternate selection. But just one reader made all the difference.

Gregory Peck, one of the country’s biggest movie stars, read the book, liked it and put together a deal to star in a film version.  And Robert Mitchum played one of the all time great screen villains in Cape Fear; so named because the final confrontation was moved from the novel’s farmhouse to a houseboat on the Cape Fear River.

It was remade under the same name in 1991 with Nick Nolte in Peck’s role and a seriously disturbing Robert DeNiro as the bad guy.

The Executioners moved MacDonald up a rung on the critical respectability ladder. A few years later, because Richard Prather switched publishing companies, Travis McGee was born (that sounds like another PLoSH column!). 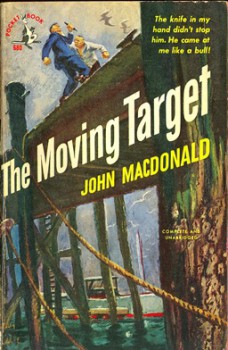 MacDonald had an MBA from Harvard and served in the Office of Strategic Services (OSS). Valuable life experiences, but no more qualifying him to become a successful writer than you or I. However,  he made  a choice of career and worked tirelessly to succeed at it. Every aspiring writer out there could learn from John Dann MacDonald.

Even with Cape Fear, he’s best known for his salvage consultant private eye, Travis McGee (who was originally going to be named ‘Dallas’ but a certain assassination left that word with an unhappy association).

You’re probably going to be hearing MacDonald’s name more often in the not too distant future. Leonardo DiCaprio is currently trying to get a McGee movie made (two prior efforts starred Rod Taylor and Sam Eliot).

While some are better than others, you won’t go wrong picking up The Brass Cupcake, A Flash of Green, One More Sunday, The Damned or any of a couple dozen other MacDonald books. He’s that good.

John D. MacDonald is no relation to Ross MacDonald, author of the Lew Archer private eye series. The latter’s real name is Kenneth Millar and he borrowed from his father’s name, John MacDonald Millar. He chose John Ross MacDonald, but his name showed as John MacDonald on the first Archer book, The Moving Target. Relations were strained between the two authors for many years.

John D. MacDonald is his favorite author and he even spent a summer on Siesta Key, around the corner from the house where MacDonald’s widow, Dorothy, still lived. He never did stop by to visit.

“That thing he’s using is called a ‘typewriter.'”

That cracked me up!

Regarding Leonardo DiCaprio’s McGee movie: DiCaprio is the one making the project happen. He originally planned on starring but has since announced he will not be in the film. So, while we may see a big screen version of ‘The Deep Blue Goodbye’, we have no idea who will play McGee.

Rex Stout, Sir Arthur Conan Doyle, August Derleth, Robrt E. Howard, Tony Hillerman, J.R.R. Tolkien, Michael Moorcock, Dashiell Hammett: there are a lot of writers I think are outstanding, but if I could only pick one to read for the rest of my life, it would be MacDonald. He’s that good.

One More Sunday and A Flash of Green are my favourite non-McGee books. I regularly reread all the ones I own, including the short stories, so I would agree with your assessment in the last comment. Thanks for this post.

@Violette – While I am a huge McGee fan, I enjoy MacDonald’s other books just as much. I did a re-read of about a dozen a few months ago. They’re not all flawless, but man, they are GOOD.

I posted on my blog about a small piece I found in ‘Judge Me Not.’ MacDonald was such a shrewd observer of human nature.

Have you read ‘The Damned’? He took a little thing (a ferry being out of order) and wrote a masterful novel. From almost nothing. To me it really shows what a fantastic writer he was.

I forgot to mention that the hands down best MacDonald resource on the web got going again last summer after a couple of years off.

You absolutely should head on over to The Trap of Solid Gold. It’s fantastic.

There should be as much commentary written about MacDonald as there is about Hemingway. Yes, I know exactly what I just typed.