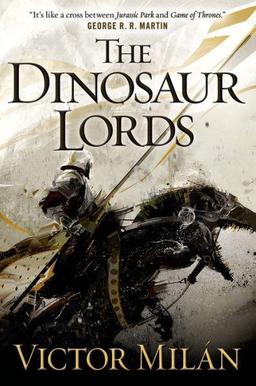 Victor Milán is the co-author of Runespear, and the author of the Star Trek novel From the Depths. His latest novel has the good fortune to be released while the hottest movie of the summer, Jurassic World, makes dinosaurs a hot property again. The Dinosaur Lords is the opening volume in a sprawling new fantasy series that George R. R. Martin calls “A cross between Jurassic Park and Game of Thrones.” It will be released by Tor next month.

A world made by the Eight Creators on which to play out their games of passion and power, Paradise is a sprawling, diverse, often brutal place. Men and women live on Paradise as do dogs, cats, ferrets, goats, and horses. But dinosaurs predominate: wildlife, monsters, beasts of burden — and of war. Colossal plant-eaters like Brachiosaurus; terrifying meat-eaters like Allosaurus, and the most feared of all, Tyrannosaurus rex. Giant lizards swim warm seas. Birds (some with teeth) share the sky with flying reptiles that range in size from bat-sized insectivores to majestic and deadly Dragons.

Thus we are plunged into Victor Milán’s splendidly weird world of The Dinosaur Lords, a place that for all purposes mirrors 14th century Europe with its dynastic rivalries, religious wars, and byzantine politics… except the weapons of choice are dinosaurs. Where vast armies of dinosaur-mounted knights engage in battle. During the course of one of these epic battles, the enigmatic mercenary Dinosaur Lord Karyl Bogomirsky is defeated through betrayal and left for dead. He wakes, naked, wounded, partially amnesiac — and hunted. And embarks upon a journey that will shake his world.

My god… that looks brilliant. Why didn’t I think of that?

I know what you mean. I think it’s too late for me to write my own a dinosaur novel and cash in on the summer dino-craze.

But it’s not too late for me to enjoy this one!

Is this a pseudonym of Violette Malan’s?

No, but now that you mention it, I think it definitely should have been!