Darkest Dungeon by Red Hook Games has been on a roll since its successful kickstarter last year and releasing on early access a few months ago. The developers are taking a slow and steady approach in terms of adding new content. With the first major content patch, Fiends and Frenzy, Darkest Dungeon grows ever more menacing, and has become a treat to play.

For people who haven’t heard of Darkest Dungeon, here’s a brief recap. The game is a fantasy RPG with strong Rogue-like and Lovecraftian elements. Taking a team of four adventurers, your mission is to explore the corrupted remains of your former estate for resources, and to slowly drive back the bandits, undead, and other things that now inhabit your home.

Party member belongs to one of the game’s many classes, which dictate their equipment, skills in combat, and what tactics they bring to your party. The twist of Darkest Dungeon is that every person comes with personality quirks, both good and bad, that affect their stats. 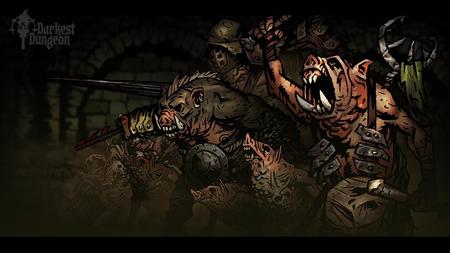 The other way for characters to die is the mechanic of “Death’s Door.” When a character hits zero health, they are left vulnerable and the next hit has a chance to finish them off — unless they are healed in time. Once a character is dead, they’re gone for good; along with all the time and money you put into them.

If you can survive long enough, you’ll be able to improve the local town with treasure; granting new upgrades and means to heal your teammates. Eventually, the hamlet will reach a point that will allow you to easily outfit and upgrade your surviving party members as you slowly turn back the corruption.

With the first major content patch, Red Hook has also been enhancing the tactical side of the game with new gear and characters. 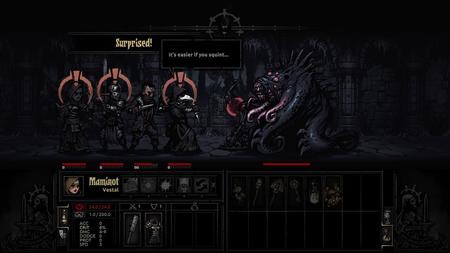 More Meat for the Grinder

Darkest Dungeon at its early access launch was already an impressive title with an engrossing tactical combat system.

Combat is turn based, with both your party and the enemy taking turns based on speed stats. Positioning is vital, as every character has skills designed to attack specific rows from set positions. This in turn defines combat roles and party formations. For example, the Leper is a heavy class with high damage and health but low accuracy, who needs to be in the front two rows.

Some classes change their utility based on what skills you give them and their position in the party. The Grave Robber can be an agile melee fighter; using their high critical chance and speed to keep moving around your party lineup. Or they can stick to the back and throw knives and poison darts with increasing accuracy.

Fiends and Frenzy extends the cast of classes with two new ones: The Arbalest and Man at Arms, who were designed to give you more options during combat. 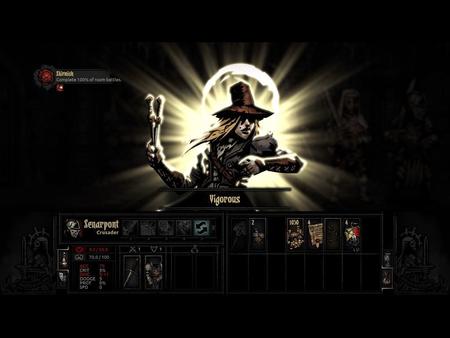 The Arbalest is a back row range support who is designed to synergize with classes like the Occultist and Bounty Hunter, thanks to their ability to mark units for increased damage based on specific skills. Their main weakness is that the bulk of their skills are meant to hit the 2nd through 4th position enemies, with only a weaker skill for the front row.

The Man at Arms represents Darkest Dungeon‘s attempt at a true “tank” class. Previously, heavy classes like the Crusader and Leper were strong in the front row, but had no ways of drawing attacks specifically to them. This left your lighter back and mid row classes very susceptible to damage.

The Man at Arms changes that, as he can put a mark on himself to draw enemies to attack, with a riposte counterattack upon taking damage. From early impressions and use, the Man at Arms may actually be too good at his tank role, thanks to his damage output from riposte.

There are still a few more classes left to be added, such as the Hound Master and Merchant. However, the current word is that they may be saved for when Darkest Dungeon comes out of early access later this year.

Finally, there are numerous quality of life (or un-life) updates throughout the game. New bosses, events and updated enemies are sure to give veterans a challenge. The new bosses in particular each have specific quirks; forcing you to design a party to counter them or suffer the consequences. 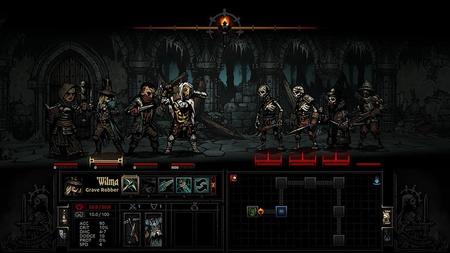 Trinkets, which are the game’s form of equipment, have been given a first round pass of updating and balance.

When Darkest Dungeon first launched, there were many trinkets held over from pre-early access that either didn’t work, or were just too good for specific strategies. Now there are far more options for you to enhance your classes with, thanks to trinkets designed around each of the classes’ unique abilities.

Stepping Into the Light

For fans of dungeon crawlers and/or Rogue-likes, Darkest Dungeon is one of the best games on early access at the moment. Keep in mind, this is a very brutal game; all it takes is one unlucky critical hit or event and your party could be in danger. You will lose your favorite characters, and the beginning of the game can be frustrating because of it.

Once you start improving the hamlet’s capability to reduce stress and augment characters, the tide will begin to turn, but it does take time. While the developers are still fine-tuning the game balance, they are aiming Darkest Dungeon to be on the higher end of the difficulty curve when it’s finished. 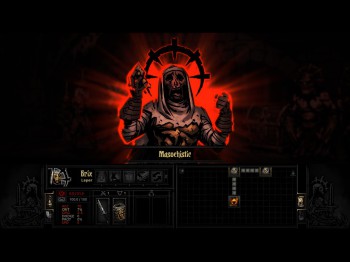 Logistically speaking, the developers still have the hound master and merchant to add (along with a Kickstarter exclusive variant class) and The Cove area to explore for the early access build.

The final area of the game, incidentally titled the darkest dungeon, will only be accessible in the retail version of the game.

When the developers originally put Darkest Dungeon on early access, they were aiming to have it fully done by the end of the year. With their recent announcement, Redhook revealed that the next update should be coming in July, and they’e hoping to officially release Darkest Dungeon in October of this year.

Darkest Dungeon is a great mix of older style dungeon crawlers with modern design sensibilities. Very few titles have such a strong aesthetic to them, which the game has had since day one. If you are brave (or foolhardy enough,) Darkest Dungeon will be a challenge that you won’t forget for a long time.