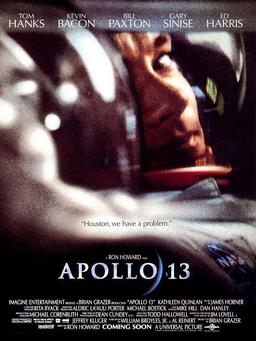 You could sweat the details, but it’s probably safe to say that the space race between the United States and the Soviet Union lasted nearly 12 years. The Soviets kicked it off on October 4, 1957 with the launch of the little satellite that could, the one known as Sputnik. The Americans fell behind on nearly every front in those early years but then grabbed the brass ring on July 21, 1969, when Neil Armstrong and Buzz Aldrin walked on the moon.

Nowadays, four decades after humans last walked on the moon, space exploration fails to stir the public imagination like it once did. Ticker tape parades for astronauts are a thing of the past, and Canadian Chris Hadfield is arguably the closest thing to a “celebrity” astronaut to come along in decades.

But it was not always thus. If you’d like a fictional perspective on how things were in the pioneering days of space flight, you could do worse than to check out the six movies listed below.

Marooned seems to have slipped into something like obscurity in the nearly half a century since it was made. It’s a movie that concerns an Apollo-like mission which runs into difficulties that prevent them from re-entering the Earth’s atmosphere. Thus, they are marooned in orbit around Earth with a limited supply of oxygen.

About five months later an actual Apollo mission — Apollo 13 — ran into difficulties that differed somewhat in the details but overall were strikingly similar. As legend has it, Apollo 13 crewmember Jim Lovell and his wife went to see Marooned in the months prior to his own ill-fated mission. He liked it and (perhaps understandably) it gave his wife nightmares. Which were dramatized in a dream sequence some years later in Apollo 13, the movie.

There’s The Right Stuff, Tom Wolfe’s 1979 book and there’s the 1983 movie, and then there’s the catchphrase derived from the title. It’s a phrase Wolfe coined to describe a certain quality possessed by test pilots in the years leading up to the start of the U.S. space program. A number of those test pilots went on to take part in the Mercury program, the country’s first foray into manned space exploration.

You’d be hard-pressed to come up with a fictional tale of space exploration more dramatic than the real-life events surrounding the Apollo 13 mission. It was designed to be the third Apollo mission to actually land on the moon but it was aborted due to some major technical difficulties. At which point the mission, such as it was, shifted to getting the three astronauts home safely.

We know how it ends, but that doesn’t seem to matter when watching the aptly named Apollo 13, directed by former child star Ron Howard and released about a quarter of a century after those events. Howard was apparently a stickler for accuracy and authenticity but not to the point where he couldn’t take a little dramatic license here and there. By the time of the infamous communications blackout, when the ship reenters the Earth’s atmosphere and the world eagerly awaits a transmission from the crew, you’ll probably find yourself on the edge of your seat. Even knowing full well that the real crew safely landed 25 years before the movie was made.

It’s a fairly standard trope of fiction and especially film. A boy from humble beginnings strives for something more, while an authoritarian and narrow-minded father (it’s usually a father) wants him to stay in his place. Which is basically the plot of Rocket Boys, a 1998 book by rocket scientist Homer Hickam, which was made into a 1999 movie. It starred Jake Gyllenhaal as Hickam, Chris Cooper as the father and Laura Dern as the science teacher who provides inspiration for Hickam and his friends as they conduct their experiments with rockets.

If you like your space race movies spiced with plenty of quirky Australian color, then look no further than The Dish, which presents a quirky, colorful town full of Aussies who are suddenly thrust onto the world stage in a big way. It’s told in flashback from the vantage point of Cliff Buxton (Sam Neill), former head of an Australian tracking station that became critical when it came to making sure that the Apollo 11 moonwalk could be viewed by an estimated 600 million people around the world. It’s based — however loosely — on the real-life story of Australia’s Parke Observatory.

The Dish zeroed in on a narrow segment of the U.S. space program — events at an Australian tracking station during the Apollo 11 mission. Race to Space does the same, narrowing its focus to the pre-Mercury struggles to simply get a rocket off the pad without it exploding. Heading the efforts, the stern German rocket scientist Dr. Wilhelm von Huber (James Woods). Any resemblance to Werner Von Braun, the real-life German rocket scientist who got the American space program rolling, is probably very intentional.

The main character here is young Billy Huber, whose mother who has died not so long ago and who can’t relate to his father, whom his own German housekeeper refers to as “too German.” Things aren’t going so well at school either, and so when Billy worms his way into a training program for the first chimp in space, it’s a welcome respite from the rest of his life.

This is a decidedly family friendly effort, and one that asks the viewer to believe that a child might save the day when some malcontents try to sabotage a high-profile rocket launch for their own ends. All that aside, it’s a well told and engaging story and not a bad way for space exploration geeks to pass an hour and a half.

William I. Lengeman III holds forth at wileng3.com.

Not a theatrical release, but HBO’s mini-series, From Earth to the Moon is a dramatization of all of the Apollo missions.

I’ll second that… From the Earth to the Moon is an absolutely stellar series. I especially enjoyed the chapter on Grumman Aircraft Engineering.

Also worthwhile on the documentary front – The Wonder of It All, When We Left Earth: The NASA Missions, In the Shadow of the Moon, and For All Mankind. Perhaps an article on space documentaries is in order.