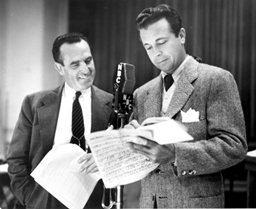 A topic that I’ve long intended to visit is that of old time radio shows. Of course, it’s no surprise that Sherlock Holmes has been a popular subject for radio dramas. Arthur Wontner (who I’m sure you read about here) and William Gillette (again, here…) reprised their film roles for radio.

Richard Gordon, John Stanley and Richard Hobbs had long runs as Holmes. And of course, the most popular film Holmes, Basil Rathbone, had a long-running serial with his Watson, Nigel Bruce.

In the forties and fifties, detectives, newspaper reporters and even insurance investigators were popular heroes for radio dramas. Sam Spade, Philip Marlowe, The Fat Man (ostensibly created by Dashiell Hammett) and Johnny Dollar were some of the radio stars of the day. One of the most fun was Richard Diamond, Private Detective.

Dick Powell was a popular Hollywood song and dance man in the thirties. He wanted to move on from lightweight roles but Warner Brothers wasn’t interested, so he bought out his contract. After failing to land the Walter Neff role (which still did another ‘against type’ casting by picking Fred MacMurray) in Double Indemnity, Powell was surprisingly cast as Raymond Chandler’s Philip Marlowe in Murder My Sweet. 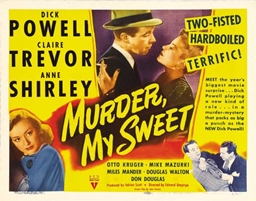 It was a success and started a new career in hardboiled and noir films for Powell. In 1945, he scored the role of Richard Rogue in radio’s Rogues Gallery. Powell played a private eye who would mostly get knocked out, receive a clue from his unconscious and then solve the case. The show continued on after Powell left.

Finally, we get to Richard Diamond. Powell had made a pilot for Yours Truly, Johnny Dollar (which went on to be a great succes), but decided not to do the radio show. The humorous, Blake Edwards-helmed Diamond show fit Powell perfectly.

Diamond was a not very busy private eye, with a high society girlfriend, Helen. Most episodes ended with Powell playing the piano and singing her a song in her apartment. Diamond was tough, often using his fists or his gun, though it seems he got worked over on a regular basis.

He was ex-Office of Strategic Services and a former New York City policeman. He was still best friends with Lieutenant Levinson of the NYPD (played mostly by Ed Begley), who was in on almost every case. Diamond constantly needled Levinson’s assistant, Sergeant Otis, who wasn’t very bright.

It’s the natural delivery and tone of Powell’s wise cracks that really make Richard Diamond work. Almost every one he meets is subjected to a line. A prospective client walks and in and gets, “You sir, have just won yourself a new economy home size murder sampler with a matching set of bodies.”

Diamond narrates each episode, and the quips never stop: “I’d teach cooking to a bunch of headhunters for the fee that he’d given me.”

Every phone call is the opportunity to deliver a groan-inducing line.

The ads for these old shows are often good for a chuckle. For example, we learn that more doctors smoke Camels than any other brand!

The show lasted for over one hundred episodes, ending in 1953. But Powell wasn’t done with Richard Diamond. In 1957, his company brought the detective to television screens, starring David Janssen, who would go on to fame as Richard Kimble in The Fugitive. 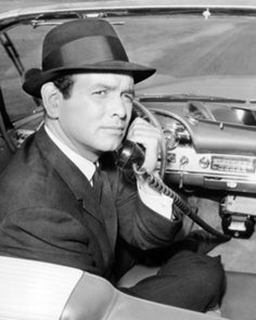 The first two seasons resembled the radio show, though Janssen simply doesn’t have Powell’s charm. However, Diamond moved from New York to Los Angeles for season three. He went from working out of a low-rent, bare-bones office to a plush ranch house with a pool in the Hollywood Hills.

He had gadgets, drove a convertible and seemed more like a mix of Hugh Hefner and Matt Houston (remember that Lee Horsley series?) than anything Dashiell Hammett ever wrote. Mary Tyler Moore played his secretary , though instead of her face, her legs were shown.

Season four toned things down a bit (now he just worked out of a nice apartment), but it still had the California feel.

The television series isn’t bad, but it suffers in comparison to Powell’s performance on radio. Janssen is more of the traditional hard boiled private eye, without the humor.

You can find both the radio and television series’ online. I definitely recommend listening to a few episodes with Dick Powell. I think you’ll like them.

Now that I’ve written about Richard Diamond, it’s pretty much a done deal that Yours Truly, Johnny Dollar, is coming.

Nice piece, Bob. I’ll have to hunt up some Richard Diamond for one of Tangent Online’s OTR episodes. I like both the soft-boiled and hard-boiled detective/PI shows on radio and Powell as Diamond was one of the good ones.

When I’m in the car on a long trip, I’ll often listen to XM 82, the Old Time Radio channel. Some things make me switch away right off, but a block with Richard Diamond in it is worth changing my planned stops for.

Dave – Sometimes, I have trouble with silly. But Powell does it really well in this series. Which I prefer to his Richard Rogue.

Jay -I don’t have satellite radio anymore. But I do enjoy streaming those shows through my PC. There’s an unbelievable amount of old radio shows in several genres. Lots I know I haven’t even explored yet.

Catching up on The Public Life of Sherlock Holmes – and Jeremy Brett’s coming! | Almost Holmes

[…] week’s The Public Life of Sherlock Holmes post was about Richard Diamond, Private Detective. I’m a fan of old time radio shows and that’s one of my favorites, […]

And Mary Tyler Moore has passed away at age 80. Sigh..