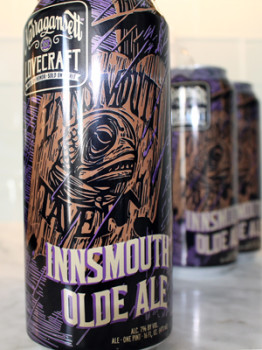 When I first read it, “The Shadow Over Innsmouth” was not among my favorite H.P. Lovecraft stories; I was drawn to more cosmic works like “The Whisperer in Darkness” and “The Shadow Out of Time.” But “Innsmouth” has grown on me over the years, in part because I can better appreciate its sophistication and in part because technology has evolved to the point where the story is as much prescience as fantasy horror. Ken Hite’s discussion of Robert M. Price’s essay prefacing The Innsmouth Cycle made me realize the story is more than just a guy being chased by a bunch of inbred townies:

Among other things, Price makes the point that Obed Marsh is the prophet of a Cargo Cult, one which implicitly casts Lovecraft’s New England as a primitive backwater. … Lovecraft’s story brilliantly inverts the colonialist understanding of the Cargo Cult by demonstrating that the Other (the non-white, the “Kanak,” the foreign) is the far more sophisticated myth, one with a better claim both on the past and the future than white Massachusetts Protestant Christianity.

If you haven’t read the story, then spoilers crawlin’ an’ bleatin’ an’ barkin’ an’ hoppin’ after the jump!

It never before occurred to me that “Innsmouth” is a narrative of colonization by a civilization that is largely superior to us. Recall Jared Diamond’s explanation of why he wrote Guns, Germs, and Steel: to answer a question put to him by Yali, a Papua New Guinean man.

Two centuries ago, all New Guineans were still “living in the Stone Age.” That is, they still used stone tools similar to those superseded in Europe by metal tools thousands of years ago, and they dwelt in villages not organized under any centralized political authority. Whites had arrived, imposed central government, and brought material goods whose value New Guineans instantly recognized, ranging from steel axes, matches, and medicines to clothing, soft drinks, and umbrellas. In New Guinea all these goods were referred to collectively as “cargo.”

… [Yali] and I both knew perfectly well that New Guineans are on the average at least as smart as Europeans. All those things must have been on Yali’s mind when, with yet another penetrating glance of his flashing eyes, he asked me, “Why is it that you white people developed so much cargo and brought it to New Guinea, but we black people had little cargo of our own?”

Like Englishmen offering glass beads to Native Americans, the Deep Ones entice Obed Marsh and the Innsmouthians with gold, an element that to our undersea imperialists seems both abundant and useless. The real technology upgrade — the steel axes and machetes and firearms — is something worth even more.

“… Them things told the Kanakys that ef they mixed bloods there’d be children as ud look human at fust, but later turn more’n more like the things, till finally they’d take to the water an’ jine the main lot o’ things daown har. An’ this is the important part, young feller — them as turned into fish things an’ went into the water wouldn’t never die. Them things never died excep’ they was kilt violent.”

Immortality implies resistance to disease and the ability to heal from common injuries; a lengthening of the telomeres and an immunity to aging. If an alien race landed upon our shores and told us we could live forever and never grow old or sick, and all we had to do was splice their genes into ours (and maybe contribute to their kitchen pantry from time to time), some would be horrified. To those people it would be a Faustian bargain, a loss of their humanity mixed with the revulsion many native cultures probably felt when the Christian missionaries eroded, slowly and surely like glaciers, the indigenous beliefs that had always comforted them — the same revulsion felt by Our Hero toward the Esoteric Order of Dagon. But others would be tempted by the offer; and still others would accept. Lovecraft predicted transhumanism and its arguments for and against by decades. 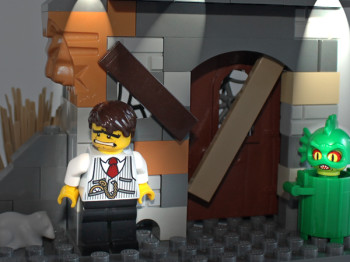 Lovecraft is often characterized as a turgid writer but rereading “Innsmouth” impressed me with his ability to write action: the growing anxiety as Our Hero’s entrapment in the Gilman House becomes apparent, his escape onto the rooftops and into the darkened streets, the claustrophobia when he realizes the roads out of town are patrolled. Poe was obsessed with being buried alive; Bierce by mysterious disappearances. Lovecraft, for reasons of his own, was morbidly fascinated by the withered fruit of dying family trees. Commonplace critics see this as proof of his phobia of racial pollution; but I suggest those critics are too fortunate and naive to empathize with a man’s very real concern that familial mental illness might reach out on lonely nights to tap him on the shoulder. In stories like “The Lurking Fear” or “Arthur Jermyn,” family roots flower into degeneracy and devolution; but in “Innsmouth” they are at worst a mixed blessing. Unlike the suicides and asylum incarcerations that await most of Lovecraft’s protagonists, “Innsmouth” has a happy ending of sorts, a plan for action followed by an eternity spent with cousins and great-grandmothers “amidst wonder and glory for ever.” Our Hero doesn’t want to run away from his family but instead be reunited with them.

The beer itself is quite nice, an English-style pub ale with a bitter finish. Narragansett calls it “our interpretation of the select stock ales served at taverns and roadside inns both found in Olde England and Olde New England, much like how we imagine the very inn that the unnamed protagonist visits in Lovecraft’s story,” though I’m not sure what inn that could be, since Our Hero, like Lovecraft himself, is too much of a fussy eater for table service, subsisting instead on crackers and canned vegetable soup. Regardless, violating the Volstead Act was the least of the crimes committed at the mouth of the Manuxet so if there was a tavern in Innsmouth, I’m sure Narragansett was on tap.

The can’s incredible artwork is by well-known Lovecraft illustrator Jason C. Eckhardt — and no, so far prints aren’t available.

Me on the first entry in Narragansett’s Lovecraft Series here.

I always thought there were more readings to the withering family tree theme as well. After all, historically it is the families that remained most “pure” –i.e. royal family lines — that were most likely to exhibit deformities and mental illnesses from the lack of genetic variety.

Those Lego pics are hilarious!

Thanks Nick! I think his family and the very unusual circumstances of HPL’s upbringing informs a lot of his work.

Maybe I should make more Lego dioramas for future posts!