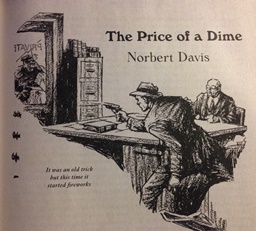 Like many pulpsters, Norbert Davis wrote for several different markets, such as westerns, romance and war stories. But he was at his best in the private eye and mystery field. Davis could write standard hardboiled fare, but he excelled at mixing humor into the genre, and many argue he did it better than anyone else.

Joe ‘Cap’ Shaw, legendary editor of Black Mask, didn’t feel that Davis’ hardboiled humor fit in to the magazine and the writer only managed to break into Black Mask five times between 1932 and 1937.  Davis had success in other markets, however, with eighteen stories seeing print in 1936, for example. And several stories appeared in Black Mask after Shaw departed.

Ben Shaley appeared in the February and April, 1934 issues of Black Mask and represent two of the five Davis stories that Shaw chose to print.

Shaley was a Los Angeles PI introduced in “Red Goose.” I like Davis’ description: ‘Shaley was bonily tall. He had a thin, tanned face with bitterly heavy lines in it. He looked calm; but he looked like he was being calm on purpose – as though he was consciously holding himself in. He had an air of hardboiled confidence.’

The humor that Davis is best known for is pretty much absent from this story, but that proves he could hold his own writing ‘straight’ hardboiled. Though Shaley’s exasperation with the nerdy museum curator, as the detective tries to lay the groundwork for the case is amusing. 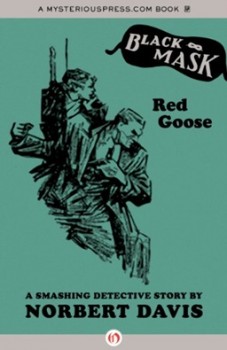 Shaley agrees to find a painting from 1532, which had been cut out of the frame while a fight in another part of the museum distracted the guards. The museum will pay up to $5,000 for its safe return. Shaley is hired by the curator of a museum to recover the stolen painting. Davis incorporates the boxing scene, the art world and a gang of thieves without honor, jampacked into a short tale. It’s well-crafted pulp with something of a twist at the end.

One thing I’ve noticed about Davis: villains get roughed up. In pulp stories, the heroes get worked over and shot – so do the bad guys. And this applies to women. If you believe someone should never strike a woman, you probably shouldn’t read Davis:

‘He picked her up by the front of her dress and slapped her in the face – quick, sharp slaps rocked her head back and forth.’

You can read the story and decide if she deserved that. But a villain gets what they have coming, regardless of gender. That’s just the state of things in the setting. I don’t have too much sympathy for the antagonists who are on the receiving end of what they deserve, male or female. It’s a rough and dangerous game.

Davis writes an action-packed final confrontation, with Shaley and four others in one apartment room. There’s punching, strangling and shooting in a chaotic scene. Shaley manages to get out alive and ends up back where he started, in the curator’s office, the case solved. Or is it?

A 1952 episode of the television show Suspense featured Shaley and was said to be based on a Nobert Davis character. The Blue Panther reworked elements of “Red Goose,” but it was clearly adapted from the story.

I like “Red Goose.” I’d recommend it to anyone who simply dismisses Davis as the hardboiled guy that wrote with too much humor (which is a wrong viewpoint to begin with).  When Raymond Chandler began his pulp career later in his life, he said that “Red Goose” impressed him more than any other tale he read. That’s a slightly more authoritative recommendation than my own.

Shaley made his only other appearance just two months later in “The Price of a Dime.”

Shaley’s secretary, Sadie, would have been an entertaining character if the series had gone on. She is trying to forcibly remove a large blonde woman from the office as this tale opens. The woman’s brother, a bellhop of questionable integrity, is going to be arrested for some hotel shenanigans and she wants Shaley to help.

A crazy, violent escapade follows, with a Hollywood director in the middle of things. Things go a bit poorly and someone says of an angry Shaley, “No, he gets that way when he’s mad. And when he’s mad, he’s a great big dose of bad medicine for somebody.”

Unlike “Red Goose,” this story ends with a chase scene and a shootout – on the lot of a western movie. And Norbert Davis never again wrote any stories about his Los Angeles detective.

The only backstory we get on Shaley comes from the detective himself:

“I’ll tell you a story – a true one. One time there was a man who was a racetrack driver. He cracked up badly and his nerves went haywire. He couldn’t drive any more. He came out to Hollywood, hoping to find something to do.

He didn’t. He went broke. One day he was standing outside a studio. He’d pawned everything he owned but the clothes he wore. He was hungry and sick and pretty much down. While he was standing there a director came along. The director gave that man a ten-dollar bill and told him to go get something to eat.

He gave the man a work-slip and let him work as an extra for a month, until he got on his feet again. I was that man…” 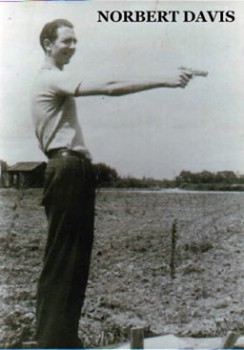 Shaley isn’t one of the great hardboiled private eyes. He’s not even my favorite Davis character – I like Max Latin. But Davis wrote two good stories about Shaley and the PI represented 40% of his success with Joe Shaw at Black Mask. I’m a little surprised he didn’t write a few more Shaley tales to make it into the magazine. Even as eight of his stories were accepted post-Shaw, he never revisited Shaley.

And that is the pulp career of Ben Shaley. These two stories don’t have any of the obvious humor Davis excelled at, but they’re not dry or dusty. There is some humor here and there (especially with Sadie). They’re enjoyable hardboiled private eye yarns from the heyday of Black Mask.

Davis received his law degree from Stanford in 1934 but he was doing so well writing for the pulps that he never took the bar exam. While he barely cracked Black Mask, he was successful with many other mystery pulps, including Detective Tales, Detective Fiction Weekly and Dime Detective. He also appeared frequently in Argosy.

In 1944, Davis quit the pulps, cold turkey, and wrote for the slicks; the glossy-paged magazines that were more prestigious and paid better – like The Saturday Evening Post and Collier’s.

Apparently struggling with personal problems and with his sales drying up, he took his own life on July 28, 1949. He was only 40 years old.

Shaw (grudgingly, one supposes) included “Red Goose” in his legendary Hard Boiled Omnibus compilation. In an unpublished introduction to the story, Shaw wrote,

“There is one thing that makes Bert Davis an individualist; he always did and always will write just what he very well pleases: mostly what strikes him as ‘funny’.”

John L. Apostolou wrote the best piece on Davis I have yet read: “Norbert Davis – Profile of a Pulp Writer.”

Norbert Davis is absolutely worth reading. Trust me and Raymond Chandler on that. Davis will be making at least two or three more appearances here in A (Black) Gat in the Hand. Next up for Davis – the Max Latin stories (complete collection available from Altus Press). And probably after that, Bail Bond Dodd.

“The Price of a Dime” can be found in The Black Lizard Big Book of Pulps. “Red Goose” is available as an ebook for $1.99 (free via Kindle Unlimited).

A (Black) Gat in the Hand: D.L. Champion’s Rex Sackler (Next week)

It’s too bad there were no more Shaley stories, but there’s plenty of other Davis to enjoy. Thanks for another great post!

R.K. – It is puzzling. Two stories in three months. Then no more. And since Davis rarely made it into Black Mask, writing a few more would have seemed a natural. Shaley and Sadie would have been a fun combo for another half dozen adventures, minimum.

With the possible exception of Frederick Nebel, I’ll probably write about Davis more than anyone else in this series. I really, really like his stuff.

And I’ve not read any of his westerns yet. I find it odd that Hollywood only used one of his stories for a film, and it was a western!

I truly enjoyed his Max Latin stories, and quite liked the one Carstairs novel I read, though not enough to rush out and snag the next two. If I chance on them, though, I’ll probably read them, and I’ll certainly smile multiple times, and most likely laugh once or twice as well.

Howard – I’ve read two Bail Bond Dodd stories and I liked them quite a bit. They’re humorous without being overtly funny. Davis was good at that style.

I have the three Doan and Carstairs novels as a cheap ebook, but haven’t read them yet. They’re on the list. The first one, ‘The Mouse in the Mountain’ is considered to be the best of them.

‘A (Black) Gat in the Hand’ is making a return appearance this summer here at Black Gate.

And I’m already working on a post about Max Latin, Davis’ PI with a shady reputation. He only write five stories about Latin, but they’re great reads.

I bought and read this, wish there had been a few more stories for my $20, but enjoyed what was there, and your intro.