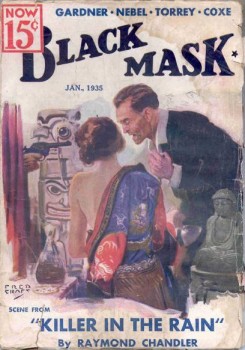 Joseph ‘Cap’ Shaw was still at the helm of Black Mask in January of 1935, when Raymond Chandler’s “Killer in the Rain” scored the cover. But this issue also included stories by Frederick Nebel, Erle Stanley Gardner, George Harmon Coxe and Roger Torrey. All that for fifteen cents!

“Killer in the Rain” featured Carmady. I’m in the camp that feels all of Chandler’s PIs: Carmady, Ted Carmady, Ted Malvern and John Dalmas were all essentially Philip Marlowe with slight differences. Carmady appeared in six stories – all in Black Mask.

The story was heavily cannibalized for Chandler’s first novel, The Big Sleep. Carmen Dravec became Carmen Sternwood, played memorably by Martha Vickers in the HumphreyBogart film. Two other Carmady stories, “The Curtain” and “Finger Man,” were also used. I think that “Killer in the Rain” is a strong story on its own and is definitely worth reading. I’m tinkering with ideas for a separate post on this story.

Frederick Nebel, whose Tough Dick Donahue (subject of an earlier post in the series) would replace The Continental Op when Dashiell Hammett left the pulps, provided Black Mask readers with the twenty-eighth adventure featuring Captain Steve MacBride of the Richmond City Police and newsman Kennedy of the Free Press. MacBride is a tough, by-the-book cop, while Kennedy is a hard-drinking smart aleck reporter. However, both are committed to justice and cleaning up corrupt Richmond City.

Except for one story (“Hell on Wheels” – Dime Detective), the entire series appeared in Black Mask. The collection has been reprinted in a three-volume series from Altus Press.

George Harmon Coxe was the subject of the very first With a (Black) Gat post. “Murder Picture” starred Flash Casey, the rough around the edges crime photographer. Coxe replaced him with the more polished Kent Murdoch, who appeared in almost two dozen novels. The Casey tales are fun reads and I have enjoyed the ones I’ve tried; though I think I prefer the short stories to the books. Casey has been used in radio, television and film. A younger Darren McGavern played a character based on Casey in the tv series, Crime Photographer, in 1951-1952.

Erle Stanley Gardner was the definition of ‘Prolific Pulpster,’ producing short stories and novels at a ridiculous pace. “Winged Lead was the only story of his to feature Bald Pete . Sounds like a western, eh? There’s a Gardner post coming up soon involving Ed Jenkins, ‘The Phantom Crook.’ Jenkins appeared in Black Mask an amazing 72 times! Of course, Gardner created famed defense attorney Perry Mason, and I’m a huge fan of his duo, Cool and Lam.

Roger Torrey may have set the standard for hard-drinking pulpsters. Writing for about a dozen years, he cranked out almost three hundred short stories and novellas and one novel (42 Days to Murder). Torrey frequently scored the cover for a wide range of mystery magazines and wrote in a flat-out hardboiled style. He had no interesting the story-driven noir that Cornell Woolrich, Steve Fisher and others developed Torrey died of acute alcoholism at the age of 45. He’s largely forgotten today, but his best work, much of which appeared in Black Mask, is reminiscent of Hammett’s style. And in the thirties and forties, Torrey was as prolific as just about anybody else in the field. “Beginner’s Luck” was about Mike O’Dell, a bodyguard.

Finally, George Alden Edson seemed to specialize in horror mystery stories – magazines that published these kinds of stories were sometimes referred to as ‘shudder pulps,’ though the stories are generally referred to today as ‘weird menace’ tales. I’m unfamiliar with Edson.

There’s an awful lot of quality reading in this 15 cent issue of Black Mask.

A (Black) Gat in the Hand: Norbert Davis’ Ben Shaley  (next week)

I was away yesterday and missed this. “Killer in the Rain” was one of the very first things I read by Chandler, in a paperback collection of his stories by that name. After that I read everything by him I could buy, and I still have them all. I love his short stories, “Red Wind” being a favorite.

I recently read Red Wind, watched the Philip Marlowe episode with Powers Boothe (Nero Wolfe/Maury Chaykin was in that one) and listened to the Van Heflin radio show version.

I liked all of them.