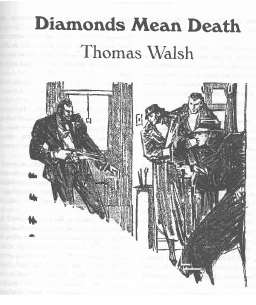 Eighteen years after writing his first story, Thomas Walsh’s 1951 debut novel, Nightmare in Manhattan, won an Edgar Award. Twenty-seven years later in 1978, he picked up another Edgar for the short story “Chance After Chance.” That is impressive! Walsh wrote a half-dozen stories for Black Mask in the thirties and his “Best Man” was included by Joseph Shaw in his prestigious Hard-Boiled Omnibus.

It’s a buddy cop story – except the two men aren’t buddies. Flaherty is well-dressed, small and the smart detective. Mike Martin is big, rough, not the quickest thinker and looks rumpled. It’s brains and brawn.

A banker named Conrad Devine is being threatened, presumably with death, if he doesn’t pay out.

Flaherty constantly pokes at Martin, annoying the bigger man. More than once, Martin’s exasperation with his temporary partner is expressed as “I’m gonna lay you like a rug.” 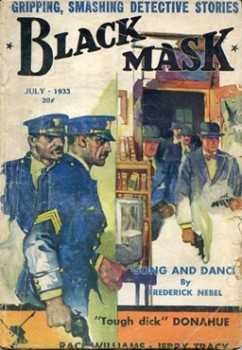 Flaherty leads and Martin follows. Frankly, I’m not really sure what Martin contributes to the case other than being a second body hanging around. He doesn’t really do anything beyond intimidate a dweeby little guy and watch an exit. And to give Flaherty an outlet for sarcastic comments.

This is a Mike Martin story. He does 100% of the figuring and takes almost 100% of the action. In typical fashion, after taking charge of a dangerous situation (and killing a man), he loses the advantageous position and gets knocked unconscious. Then nearly gunned down in the street afterwards.

But he figures everything out, beards the villains in their lair, gets tied up, then manipulates the situation to a successful conclusion. It’s the Mike Martin Show. He even finishes with a witty bon mot, leaving Flaherty to close things out with his ‘rug’ line.

I don’t mind this story, but it didn’t leave me with any great desire to re-read it. Nor disappointed that there weren’t any more Martin/Flaherty stories (that I’m aware of). It wasn’t a bad read, but I moved on to Charles G. Booth’s “Stag Party” and left it behind me.

Walsh’s “Diamonds Mean Death” was his last Black Mask story, appearing in the March, 1936 issue.    Readers also found “The Man Who Liked Dogs” from Raymond Chandler, Paul Cain’s “Pineapple” and a story from George Harmon Coxe. Who you know all about because you read the first With a (Black) Gat post, right????

Major Russell, a British man of adventure, wishes to sell some diamonds to Ellen Bridges at the significantly discounted price of $35,000. Joe Keenan is a friend who is looking out for Ellen’s interests. Someone from Russell’s past gets the drop on the meeting (‘When in doubt, have a man come through the door with a gun in his hand’). It appears he’s about to reveal some useful information but Russell shoots him dead.

Keenan spends the rest of the story trying to figure out what Russell’s up to; it has to be something. Captured by two gunmen, Keenan knocks out both men instants before the car careens into the concrete guardrail. It’s a well-written action scene.

You’ll have to read the story yourself for the rest of the details. As with “Double Check,” it’s an okay story, but didn’t make much of an impression on me. I haven’t sought out Walsh’s other works, though I suspect that the Edgar winning novel, Nightmare in Manhattan, is probably worth a read. There’s nothing wrong with these two stories, they just didn’t make much of a mark on me.

After receiving a B.A. from Columbia, Walsh had briefly been a reporter for the Baltimore Sun before embarking on a fulltime career in the pulps, also working in the slicks. I don’t know much else about him.

Nightmare in Manhattan was adapted into he hit film, Union Station, starring William Holden. Though the story was moved from New York City to Chicago, the source material was clearly recognizable.

I’ve always felt Walsh to be a minor hard-boiled writer, in spite of the story output and awards.

Walsh appeared five times in the Saint Detective/Mystery Magazine in the following issues of which I have three of them: 08/09-53; 10/54, 04/55, 10/55, 06/59. The October 1954 issued featured In Line of Duty from 1941, October 1955 contains Peaceful in the Country from 1946 and finally The Harringto Case in the June 1959 issue from Black Mask October 1934 under the title Best Man. The first story I had read but frankly was not impressed to pursue him further but an article from you calls for a second look. I have found a few gems for reading out of the Saint magazines I have but his reprint listings are very hit and miss.

Walsh was originally going to be the second post in the series. But as I kept reading more and getting more ideas (like looking at an entire issue of Black Mask, which is up next week), I kept dropping him further in the schedule.

As I say, there’s nothing wrong with the stories, but I’ve liked most of the other things I’ve read more.

As evidenced by my Back Deck Pulp posts on FB.

BTW….If you are reading this column (all eight of you) but are not my Friend on FB, check me out there.

As I read stories and about authors, I’m doing short FB posts about the subject, with a story illustration or the cover included. Usually, the post is made while I’m sitting out on my back deck (hence, the clever title). You’ll see a lot of my knees…

I’ve dropped in some interesting little nuggets and covered a LOT of subjects – many of whom will be future posts here.

In fact, I’ve done so many Back Deck Pulps, that I’ve taken a bunch of them and put them together into an upcoming ‘A (Black) Gat in the Hand’ post. And a second one is under way.

I’ve been putting out a least a couple a week as I do more and more research for this column, which frankly, has been an absolute blast so far.

Think of it as bonus material for the column!

Sorry, Bob, I don’t do F-Book. (or Twitter, Snap-Chat, Instagram or any of the others. Blog and email only for me.

I get it, R.K. I was late to Facebook. I even made fun of it when I started my first blog.

But, for one example, I wouldn’t have become friends with the late Bill Crider without FB. And I’ve gotten to know a lot of other writers and scholars in fields I’m into.

FB is as useful (or annoying) as you let it be. That’s my take.