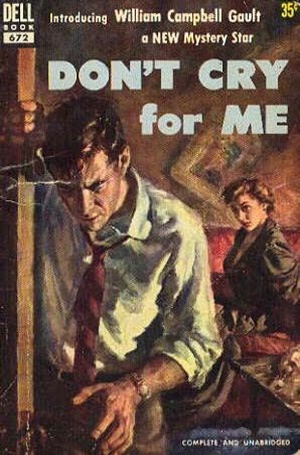 “I’m proud of what I can do in my field. And I’m proud of the field. I don’t need any false additions to that. If I could write like John Cheever, I’d write like Cheever. Unfortunately, I can’t, so I write as well as I can and as fast as I can. And some of it is good.”

That was William Campbell Gault, of whom Frederic Brown wrote, “…this boy Gault can write, never badly and sometimes like an angel.”

William C. Gault was a quality pulpster in the forties and fifties who created two top notch private eye series’ in paperback. Gault won an Edgar Award in 1952 for his first novel, Don’t Cry For Me. He said that it was out of print two months after it came out. Writing juvenile sports novels was more lucrative for him and in the sixties he focused on them, rather than mysteries. Gault, well-respected in the hardboiled genre, hasn’t received the popularity he is due.

“Hibiscus and Homicide” was the first of two stories featuring Hawaiian detective Sandy McCane and appeared in the October, 1947 issue of Thrilling Detective. “Waikiki Widow” followed in March of 1948 in Street & Smith’s Detective Story Magazine.

In the first story, McCane is hired to find a missing singer/dancer by her boyfriend, Juan Mira, an undersized, former boxer. Gault drew heavily on this story for his 1955 novel, Ring Around the Rosa/Murder in the Raw; the first of several to star Brock ‘The Rock’ Callahan.’

McCane is an honest, diligent private eye who gets drugged and finds himself framed in bed with a dead girl next to him. Never a good thing, right? He keeps at it, connecting with a childhood friend who grew up into a beautiful blonde. And she’s rich!

I like Gault’s writing style. It flows smoothly and it’s descriptive:

‘At the door of the bar, Vic’s righthand man was lounging and he should be worth a paragraph. His name was “Meat” Kozak, the Meat referring, no doubt, to the size of him, which was impressive. He was about six feet four inches and fifty pounds past the two hundred mark. Cauliflowered ears and a flat nose were souvenirs of the days Vic had thought this boy of his might bring him riches with his gloves. The boy hadn’t. There hadn’t been the proper coordination between his big body and his small brain.

Meat was waring sport shirt and slacks and sandals and a smile he thought genial which managed to stop just this side of grotesque.’

You’ve got a pretty good picture of Meat now, don’t you? Gault is a professional with words and he carries the narrative forward well. 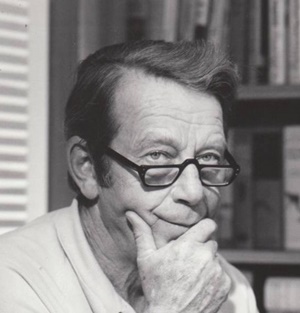 This is really a short novella and it’s hard to figure out what the deal is, but Gault ties it all together and takes the reader to the climax. I like this story and I like Gault.

“Two Biers for Buster” appeared in the March, 1947 issue of Dime Detective.

It featured Red Barry, who seemed to be a one-off private eye. The widow of Buster Cowan hires Barry when someone tells her she has some information about her husband. Barry had been in a military training camp with Cowan, though they had not been close.

It turns out that Cowan, who was killed in a military depot explosion, had stolen $50,000 before leaving for the service. His past misdeeds are now causing his widow some trouble. Barry is a steady, dependable PI who doesn’t hide anything from the police. For a rather short story, there is a lot of gunplay and a twist at the end. It’s a good story.

Another Dime Detective story was “None But the Lethal Heart, which was in the January, 1951 issue. Calvin Calvano is another PI making a solo appearance. He’s hired by an attractive blonde (goodness: they’re all over hardboiled stories, aren’t they?) to do a character check on a guy who turns out to be a known gambler. A bit odd: but Calvano had just helped put away a shake-down artist and had gotten some press, which is always good for business.

Of course, the dame isn’t being up front with Calvano and the police, mostly in the form of Captain Rodriguez, aren’t happy with Calvano’s forthrightness, either. Especially as the shamus seems to have a habit of finding dead bodies with knives in them.

Upon finding the second body, Calvano ponders his situation:

‘I could call the police and wait. Rodriguez would believe me – like hell. A man would need to believe in a double coincidence on the same day. I don’t think there were any men like that and I knew there weren’t any on the police force.

I didn’t believe it myself.’

Calvano figures things out and the final confrontation has no gunplay. Gault explains what was really going on to close out the story. As I’ve mentioned before, Gault writes well, and as a result, his stories are good reads.

“Hibiscus and Homicide” can be found in The Mammoth Book of Pulp Fiction. “Two Biers for Buster” is in Tough Guys & Dangerous Dames. “None But the Lethal Heart” is in Hard-Boiled Detectives. You can find some info on all three of those anthologies in this earlier post. 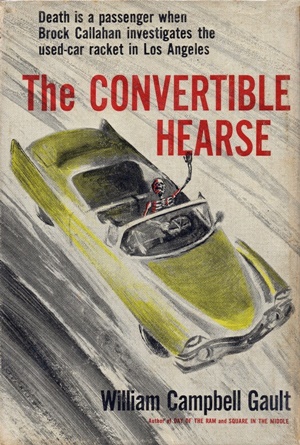 Gault created Brock ‘The Rock’ Callahan, one of the most noble private eyes in the field. Callahan was one of the greatest guards the Los Angeles Rams ever had, then became a shamus after hanging up his cleats. There are plenty of NFL references in the stories. Gault wrote seven Callahan novels between 1955 and 1963, then seven more after he returned to the mystery field in the eighties.

Joe Puma, a lot less noble than Callahan, featured in seven novels between 1953 and 1961, then made one final appearance in a 1982 Callahan book. The Callahan and Puma series’ are fine examples of Gault’s skill at his craft.

Born and raised in Wisconsin, Gault served in the infantry in World War II and settled in California after his discharge. That’s where he found his writing success. He was neighbors with Ross MacDonald, who dedicated his last novel to Gault.

It’s strange: it’s hard to find a bad word about Gault’s hardboiled writing, but he’s not very well remembered or discussed much today. Several of his novels are available in ebook format, which may help generate more followers for him. His popularity should equal his reputation.