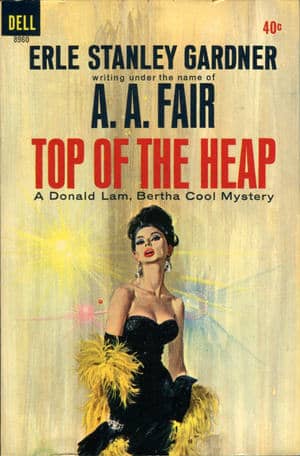 Last week’s post was on Hard Case Crime’s upcoming reissue of The Count of Nine. Since I was in a Cool and Lam mood, I went ahead and re-read the prior reissue from Hard Case, Top of the Heap, which was only the third book from the imprint. I recommend reading one of my prior posts on the Cool and Lam series to help provide some background for this post. You can find them here, here, and here (last week’s).

As usual, a client is not up front with them, but he pays well, so also as usual, Bertha doesn’t care. Donald is always a little cautious, but business is business and he quickly delivers results. Once again, Bertha does nothing. But Donald keeps digging and the client stops payment on the check. Bertha is pissed at Donald.

As always, there’s a lot going on and Donald has angles everywhere, heading up from Los Angeles to San Francisco for most of the case. He’s actually less cagey with the police than he usually is, but the bay area’s Lieutenant Sheldon doesn’t think so and wants Lam picked up and brought to headquarters.

A dead gangster’s moll, a dead businessman, missing bodies, a wounded gangster, mining companies, an undercover gambling joint, a yacht club: you need a scorecard for this one.

You can buy this one yourself, and it’s Bertha at her best. Furious with Donald, though she has no clue what he’s up to, she dissolves the partnership, scratches his name off the door (ha!) and unloads on him when he finally comes back to the office, telling the receptionist to call the police.

“It felt as though an earthquake were rocking the office building on its foundations. Somewhere in the outer office a chair tipped over, a desk was shoved to one side and slammed against the partition, as though it had been hurled by some giant hand, the door almost ripped off its hinges, and Bertha Cool stood there on the threshold, her eyes glittering, her voice raised so that it was audible all over the office, and well out into the corridor”

Well, now. I haven’t said it yet in this post because it’s so well-known I didn’t think I needed to, but Erle Stanley Gardner was a first-class writer. The man was very, very, very good. That’s why he was the best-selling author in the world when he died. THAT is a great paragraph!

Bertha’s diatribe to the unflappable Lam is well worth reading, but I’m not going to retype it here. You can pick up a copy of Top of the Heap and enjoy 217 pages of top-flight private eye fiction before you get to it.