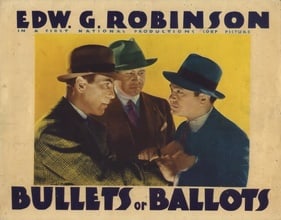 Humphrey Bogart worked his way up the ladder at Warner Brothers, frequently playing a bad guy who went up against James Cagney or Edward G. Robinson, who were big stars and a part of Warner’s ‘Murderer’s Row.’ I count seven times Bogie was pitted against one or the other, in a supporting actor role. Bogart was the star the eighth time, in Key Largo. It comes as no surprise that Bogart inevitably lost, up to that last time.

Bogart had failed twice in Hollywood before The Petrified Forest gave him the traction to stick on the west coast. He was so grateful to star Leslie Howard, who insisted that Bogart reprise his stage role as Duke Mantee, that Bogie named his daughter after Leslie. Bogart’s first film after that one is my favorite of his gangster flicks, Bullets or Ballots. It’s a typical thirties gangster film from Warners, which is a good thing.

Picking Lead (trivia) – The Petrified Forest was a smash on Broadway, and Warners bought the rights. Howard was the star and signed on to do the film. Warners wanted to use Robinson for the role of Mantee. Howard was determined the part be played by Bogart, saying he wouldn’t do the movie otherwise. Warners blinked and Bogart returned to the west coast, receiving strong reviews.

Picking Lead – Howard was killed in 1942 when the Luftwaffe shot down the Dutch commercial airliner he was flying on. His son, Ronald, also became an actor and starred in a British Sherlock Holmes television series. He played a younger Holmes and it’s an under-appreciated performance: in part because of poor scripts and low production values.

Edward G. Robinson plays Johnny Blake, a pipe-smoking cop finishing his career out-of-favor with the current leadership. He’s from the two-fisted school, and makes bad guys tip their hat to him. When one refuses to do so, Blake punches him out. When the thug takes a swing at him, he throws him through a glass door and has him arrested for destruction of property.

Blake gets fired and is recruited into Al Kruger’s criminal organization. Kruger, a longtime friendly-enemy, is played by the reliable Barton MacLane, one of my favorite supporting actors. Bogart is Bugs Fenner, one of Kruger’s chief lieutenants. He distrusts Blake, who put him in the hospital for a week.

Kruger assigns Blake to look over all of the operations to ‘tighten things up,’ as there’s a special government investigation coming. And suddenly, various illicit operations start getting raided. Fenner suspects Blake.

Bullets or Ballots came out in 1936. The next year, Bogart and Robinson would battle as rival boxing promoters in Kid Galahad. Yes – Elvis Presley starred in a singing remake years later. In 1938, they paired up again in The Amazing Dr. Clitterhouse: which sported a rather far-fetched premise. Bogart got memorable gangster names in these flicks; Bugs Fenner (Bullets or Ballots), Turkey Morgan (Kid Galahad), and now Rocks Valentine.

Bogart made three films with Cagney in 1939 (Cagney kills him twice in gangster flicks, and Cagney’s brother kills him in a western), but he’s back with Robinson in 1940. Bogie is Jack Buck (a real name this time) in Brother Orchid. Bogart’s character is only sent to jail by Robinson’s in this one – he doesn’t get killed. 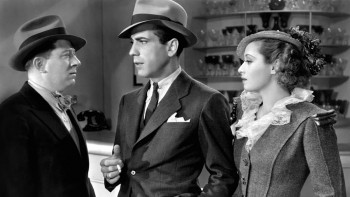 The female lead is blue-eyed Joan Blondell, who would appear with Bogart and Leslie Howard the next year in Stand-In (a surprisingly pleasant comedy). She played Blake’s close – but not girl – friend, Lee, a former hair-dresser running a small numbers (lottery) racket. Kruger expands her operations and ends up ignoring other business. Fenner bumps off Kruger, but Blake moves into the vacuum and takes over.

I’ll mention one supporting actor, Frank McHugh. McHugh often provided comic relief in his movies, with his absent-minded demeanor. He works for Lee and, as usual, is a non-tough guy. Check him out in one of my favorite Bogie films, the gangster comedy All Through the Night, which is coming up here in a couple weeks.

Fenner grows more suspicious of Blake, who we learn is a really working deep undercover to find out who is bankrolling the crime syndicate. Fenner moves in and takes over Lee’s numbers racket. Kruger and Blake confront Fenner and take it away from him. Kruger tells Blake the outfit is cutting Lee out and Blake needs to live with it. Lee shows up, Fenner directs her to Blake, and Blake admits he’s taking it over, but can’t tell her what’s really going on. Betrayed, she walks out on him.

Blake calls in to have Fenner’s milk producing operation totally shut down. Kruger, who is making lots of money from the numbers racket, is just riding out the raids on all of his underling’s operations. And they’re getting annoyed about it. Especially Fenner, who goes to Kruger’s office and kills him.

Picking Iron – MacLane made six movies with Bogart; five of which are among my favorites: Bullets or Ballots, High Sierra, The Maltese Falcon, All Through the Night, and Treasure of the Sierra Madre. Bogie killed him in their first one, while MacLane slugged Bogart in the jaw as lieutenant Dundee in The Maltese Falcon. Bogart and Tim Holt had a terrific fight with MacLane in their final film together, with the pair finally putting him down.

Then he goes to Lee and gives her back a share of the numbers, which she started. He makes a move on her but she slaps him. It’s not quite Marjorie Main smacking Baby Face Martin in Dead End…

Blake goes to Kruger’s office and finds the entire gang there, with Fenner at the desk, declaring himself in charge. Blake tells Fenner that the bosses called him and put him in charge. Blake also says that that he is to take the latest payment to them at 10 PM the next evening, and they all agree to meet at 6 PM – presumably with the money. Fenner goes along, for now.

Blake is called to a meeting with an important banker, and once there, realizes he’s meeting with the heads of the organization. They sign off on Blake replacing Kruger, and he tells them he’ll have their next payment tomorrow evening.

The cops raid the main operating headquarters and get the entire gang, and the money, and evidentiary matter. The lookout saw Blake tip off the raiders, and he tells Fenner, who finds out from Lee where Blake is waiting to go make the delivery. Lee, who now knows Blake is still working for the police, hurries there after Fenner. 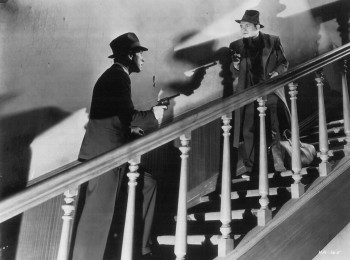 Fenner finally confronts Blake and they have a shootout on a staircase. The use of shadows is classic hardboiled cinematography. Fenner is killed (Shocked, I am shocked to find Bogart’s character gunned down by the star!), while Blake, mortally wounded, is driven by Lee to his meeting. Dying, Blake makes his delivery to the ‘upright citizens,’ crawls to the front door and collapses on the stairs. The police rush in, catch the bad guys, and Blake dies in the captain’s arms. Blake even manages to tell him that the bullets in him will match the ones Fenner put in Kruger and another man.

Robinson plays his part well, pulling off a sense of self-assurance as he infiltrates the gang that helps carry the movie. He gets the classic death scene speech.

Bogart plays his part exactly the way the heavy should be played in this movie. He’s tough and smart. I think he played it perfectly, and it’s one of my favorite gangster roles for him. He nailed it. I think he’s got more substance than as Duke Mantee, which always seemed a little bit of  caricature to me.

MacLane is always solid and is good as the level-headed crime boss who is Blake’s friendly enemy. MacLane, who costarred in the Torchy Blaine series (the movies are very different from the Frederick Nebel Dime Detective stories that inspired them), appeared in a lot of movies over the years in the supporting cast, and he pretty much always delivered. Check him out early in The Treasure of the Sierra Madre.

McHugh provides some humor in Blondell’s scenes, and there’s a funny bit with Bogart and George E. Stone listening to Robinson on a wiretap. It’s not a comedy by any means, but there is a little humor mixed in, which works. 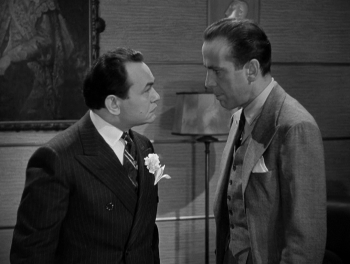 There are a couple action scenes, and the plot moves forward smoothly. It’s easy to follow along with, unlike Johnny O’Clock, which I wrote about last week. Fenner was right about Blake, and he makes the copper pay for it, but at the cost of his own life. BTW – Fenner absolutely had the drop on Blake and should have killed him before Blake could get a shot off. I’ve watched their shootout over a dozen times, and I’m convinced of this. He shot Blake twice; and then Blake shot him four times.

This isn’t a big budget crime epic, like The Roaring Twenties, or Dead End. But it’s a darn good gangster flick with a solid cast. It’s one of my favorite Bogart movies in which he didn’t have the lead.

This was the second of nine crime movies (ten if you count Kid Galahad) which Bogart made in the three years from 1936 to 1938. Two busy years would pass until another gangster film, 1941’s High Sierra, put him on the cusp of stardom. Later that year The Maltese Falcon would lead to Casablanca and ‘Bogie.’

Bullets or Ballots is an enjoyable film starring two great stars of the gangster genre. It’s an entertaining movie that never wanders off course. While Bogart is in a supporting role, I think it’s on my Top Ten list for him. 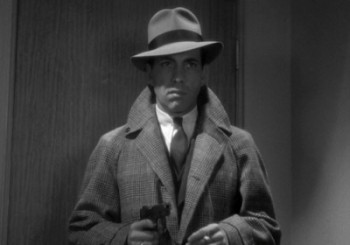 In the nineteen thirties, you tuned in to a Bogart movie to see how his criminal character was killed or captured. He didn’t win.

And he usually got a slug in the belly from Robinson. I don’t think he got to return the favor until Key Largo…

True. I mean, in ‘The Oklahoma Kid,’ he even gets gunned down by Cagney’s brother.

“Here, I’m tired of killing this guy. You can do it in this one.”

[…] at Dick Powell’s noirish Johnny O’Clock, Humphrey Bogart and Edward G. Robinson in Bullets or Ballots (one of my favorites), and today, Powers Boothe’s Philip Marlowe, Private Eye. That was […]