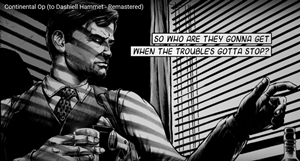 Somebody asked me if I actually write for this column, or just put up the posts for it. I started explaining the work involved in pitching the concept, recruiting guest posters, editing the posts, promoting the column through Back Deck Pulp posts on my FB page….then I gave up and said, “Yes, I do write this column. In fact, I wrote this coming Monday’s post.”

That wasn’t exactly a bold prediction, since I didn’t have a guest post in hand. Although, my essay on the excellent Joe Gores isn’t nearly done, so there was that. But I got it all worked out in the end!

Rory Gallagher was a world-class guitarist from Ireland who died of liver problems in 1995 at the age of 47. In 1987, he recorded a song entitled, “The Continental Op,” which was included on his Defender album. There’s also a song called “Kickback City” on that album and the lyrics are very much in the style of Raymond Chandler and other pulpsters who depicted the corruption and hopelessness of urban cities. And you could take the story of “Loanshark Blues” and you’d have a pretty good character for a hardbacked PI story. I recommend giving Defender a listen.

But we’re here to talk about his tribute to Dashiell Hammett, “The Continental Op.”

If you’ve come here to A (Black) Gat in the Hand, you probably already know about The Op. While The Thin Man and The Maltese Falcon are Hammett’s best-known works, it’s the Op that made him the father of the hardboiled school. In seven years, he wrote over three dozen tales featuring the nameless private eye for the Continental Detective Agency. I don’t think any other PI series has equaled the Continental Op stories.

The Op stories are readily available and are cornerstone hardboiled reading. All of the stories were recently collected in The Big Book of Continental Op Stories.

I cannot give Gallagher enough kudos for writing a song about the Continental Op, then providing a video that absolutely captures the hardboiled, pulp feel. The black and white, graphic novel style is pure throwback. You could almost storyboard a movie from it. Some of the frames fly by so fast, I had to rewatch them several times. But the overall effect works.

Watch the video. Then work through the rest of the post with me. It should be fun.

Now, we’re going to try and reconstruct the story from the video. And it’s not easy, as this isn’t a straight, linear explanation, like we’d have in a book. It’s visual storytelling, following song lyrics. And some things go by pretty quickly on the screen. It’s not clear how it all fits together. But we’ll do our best.

With all the skyscrapers, I think of New York City, but the Op worked out of San Francisco. And of course, the bay brings the latter city to mind first, so we’ll go with that. 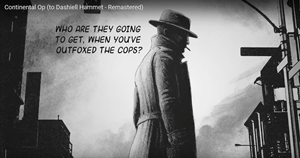 A body is found in the bay and we learn that the murder case of Agatha Dempsey was supposed to be closed.

There are blood stains on the dress of a millionairess.

The Continental Op, named Regan, is apparently on the case. Regan was the name of a prominent character in The Big Sleep, though we never actually see him.

Regan saw someone leaving town and is going to track them down.

An apparently beautiful woman, wearing a nice dress, is found dead in alley, with someone over her body.

Gallagher sings, “Call the agency, we never close.” That’s likely a reference to the Pinkertons, whose motto is “we never sleep.” The image of an unblinking eye as their logo is actually the source of the term, ‘private eye.’

“The first consultation is free.”

There is a menace on the streets, giving infants sweets. The lead suspect was arrested because they found a set of his prints. Presumably matched up with those from the scene.

The scenes show someone visiting the Op’s office and having a drink. The fingerprints were collected from that.

The beautiful woman (whose face we don’t see) visits the killer in what looks like his office.

Then the picture again of the police catching the killer over the woman’s body in the alley.

Then another fast-moving Montage and some great guitar work.

I love everything about this video. That the song is an homage; the way the video looks; the great guitar work; it’s just massively cool. Go ahead and give Defender a listen and soak in the hardboiled atmosphere. 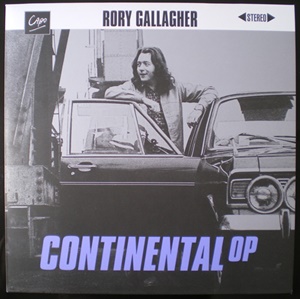 Call the agency, we never close
First consultation is free
Check my reputation, check my pose
But first check my fee

He’s suspect No. 1
But I guess his race is run
He left a set of prints
He’s not as smart as he thinks

A (Black) Gat in the Hand will run through Tuesday, January 1st. A new Robert E. Howard-centric column will take its spot on January 8th. Hey – we are a World Fantasy Award-winning website, you know!

By the way, when you get to that Gores article, just FYI, the villain in his Cons, Scams and Grifts is none other than yours truly. Joe wrote me in, one of the few times I’ve been tuckerized.

I just finished novel #4. Not sure I’ll have a chance to read Cons, Scams & Grifts, though I have a couple of times before.

My re-read of Gores has done nothing to remove him from my list of top five hardboiled authors, with Hammett and Nebel (and two others, I guess…).

I thought ‘Hammett’ was okay, but it plodded along a bit for me. Not up to the DKA level. Which, granted, is stratospheric!

Rory was one of the greatest of the rock ‘n roll bluesmen. Criminally underappreciated in the States. The blend of Rory’s music and Tim Truman’s art (Tim, also a guitarist, has been a Rory fan for decades) was inspired.