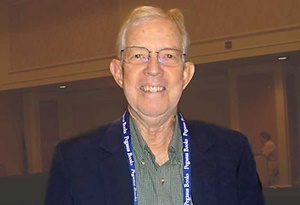 If you asked me to name the nicest person I’ve encountered since becoming a writer/blogger/whatever I am, I’d immediately fire back, “Bill Crider.” I have yet to come across one person who had anything bad to say about Bill. He was always friendly, and generous with his knowledge and advice. Bill was an excellent writer of mysteries and westerns, best known for his Sheriff Dan Rhodes series.

His ‘Bill Crider’s Pop Culture Magazine’ was a fun blog, full of all kinds of short posts about books, music, advertisements, history – pop culture stuff. I’m pretty sure that Bill would have liked A (Black) Gat in the Hand. And I think he would have contributed an essay. So, for the final entry in round two, I’m reposting Bill’s review of John D. MacDonld’s The Brass Cupcake. Swing by his blog and read some great stuff!

Now and then I like to read a book by John D. MacDonald just to remind myself of how good he was.  The Brass Cupcake was his first novel, and while it’s not as strong as some of the later ones, it’s still topnotch. I have a couple of editions, and the one pictured on the left is the one I read this time.

Cliff Bartells was a cop in Florence City, Florida, until the corruption became too much for him. It’s 1950, but already the syndicate is in town and things are starting to change. So Cliff resigned (the “brass cupcake” is a derogatory term for his badge), and now he’s an insurance adjuster. It’s not an exciting life, but it’s something he’s good at.

And then things get exciting. A wealthy tourist is murdered, and her jewelry is missing. It’s expected that the killer will make an offer to sell the jewelry (worth $750,000) back to the insurance company, and Cliff is assigned to make the buy. As a result, he meets the tourist’s beautiful niece, Melody Chance, who’s a real MacDonald woman (beautiful, hearty appetite, great figure, independent [up to a point]). You can guess what happens between them, but along the way there’s another woman, Letty, and we see how far Cliff will go to get the jewelry and solve the murder. 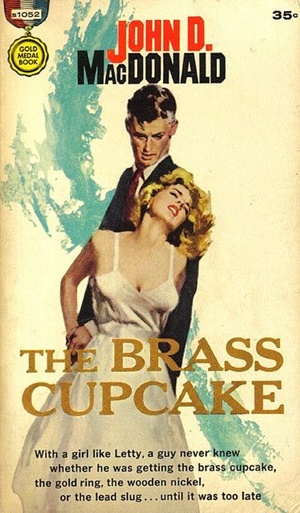 Cliff is the first-person narrator of the novel, and some of his descriptions of Letty are, well, let’s say not as flattering as those of Melody. There’s a third woman, too, the one who wants to marry Cliff. She’s needy and clingy, and the descriptions of her aren’t flattering, either. Another guy at Cliff’s office loves her, and Cliff’s advice to him at the end of the novel will set feminists’ blood to boiling.

This might be MacDonald’s first novel, but the writing is swell, the pacing is great, there’s some convincing action, and a lot of things that made his work so appealing in the later novels are there. If you think his environmentalism was something that came along later, you don’t have to read any further than this book to learn that it was always there.

John D. MacDonald is the writer who inspired me to begin collecting paperbacks 50 years ago. Reading this book again reminds me of why I was so powerfully affected. JDM has a lot to answer for.

Things could change, but I suspect this will be my final post on the blog.  I met with some doctors at M. D. Anderson today, and they suggested that I enter hospice care.  A few weeks, a few months is about all I have left.  The blog has been a tremendous source of pleasure to me over the years, and I’ve made a lot of friends here.  My only regret is  that I have several unreviewed books, including Lawrence Block’ fine new anthology, Alive in Shape and Color, and Max Allan Collins’ latest collaboration with Mickey Spillane, The Last Stand,  which is a collection of two novellas, “A Bullet for Satisfaction,” an early Spillane manuscript with an interesting history, and “The Last Stand,” the last thing that Spillane completed.  It saddens me to think of all the great books by many writers that I’ll never read.  But I’ve had a great life, and my readers have been a big part of it.  Much love to you all.

And thanks to those who jumped on board and wrote for this second go-round. I’ve got a couple different series’ in the works for Black Gate in 2020 and 2021 (Conan, and John D MacDonald, anyone?), but there’s still way too much hardboiled and pulp to write about out  there. And folks available to tell you about it. So, expect a round three somewhere down the line.