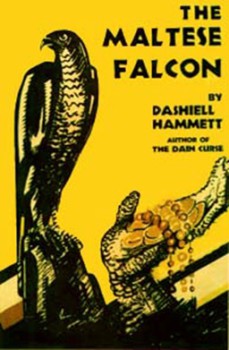 You might have noticed that my column – heck, my byline – was absent last week. Having recovered from hernia surgery, I promptly decided to have a kidney stone. It ‘hit’ last Saturday night and for about twenty hours, it was the most pain I’ve had in my life (no wife joke here…). It seems to be comfortable and hasn’t passed yet, though it’s not so bad at the moment. But between missing three days at work, peeing nonstop, and trying to catch up at work while still feeling some pain, this week’s column was pretty far down the list.

So, I decided to re-run one of my hardboiled posts from well before I ever thought of doing an entire column on that topic. I LOVE The Maltese Falcon: book and movie. Not a lot of folks know Hammett wrote a few short stories about Sam Spade: though he seemed to have done so just for some quick cash; and his heart wasn’t really in it. Read on to learn a bit about it all.

In last week’s column, I mentioned The Maltese Falcon, starring Humphrey Bogart. (Did you follow instructions and watch it for the first time?) Over eighty years after its publication, Dashiell Hammett’s The Maltese Falcon stands supreme today as the finest private eye novel ever written. Bogie’s 1941 film proved that the third time is a charm, prior attempts in 1931 and 1936 having failed.

Sam Spade, the quintessential tough guy shamus, appeared in a five-part serial of The Maltese Falcon in Black Mask in 1929. Hammett carefully reworked the pieces into novel form for publication by Alfred E. Knopf in 1930 and detective fiction would have a benchmark that has yet to be surpassed.

Hammett, who wrote over two dozen stories featuring a detective known as The Continental Op (well worth reading), never intended to write more about Samuel Spade, saying he was “done with him” after completing the book-length tale. 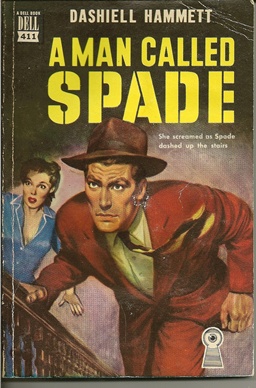 But the public wanted more and his agent cajoled him into cranking out three more short stories featuring Spade. The first two appeared in American Magazine and the third in Collier’s in 1932 and they were collected into book form later that year as The Adventures of Sam Spade and Other Stories. In 1999, Vintage Crime published Nightmare Town, a compilation of twenty Hammett stories, including all three Spade short stories.

“A Man Called Spade” is far and away the longest of the three short stories. Spade arrives at a prospective client’s apartment to find Falcon stalwarts Tom Polhous and Lieutenant Dundy there and the no-longer-prospective client murdered, a five-pointed star with a ‘T’ in the middle outlined in black ink above his heart.

Dundy’s antagonism towards Spade in The Maltese Falcon is noticeably absent in this story. The two men work together, with Spade having carte blanche in questioning people.

Except for the opening and closing scenes, which take place between Spade and his secretary, Effie Perrine, the entire story takes place in Max Bliss’s apartment and feels like it is more of a play than a story. It is, quite simply, dull and pales in comparison to The Maltese Falcon.

Dundy is completely adrift in this case and while the police help with the hard evidence, Spade’s mind alone identifies the murderer. A red herring in the case is lifted directly from a Continental Op story from a few years before. Of the three stories, this one most feels like it was hurriedly written to generate some cash.

“Too Many Have Lived” opens with Gene Colyer hiring Spade to find out what happened to the missing Eli Haven. Colyer is fond of Haven’s wife and would be happy if the man had disappeared forever. Compared to the previous story, Spade does a great deal more detecting and there are multiple locations, making this tale much stronger.

In fact, whereas “A Man Called Spade” feels like a poor imitation, “Too Many Have Lived” seems much more like authentic Hammett, though the latter is barely half the length of the former.

Finally, “They Can Only Hang You Once” opens with a bang. Spade, using a false name, is waiting to see an ill, elderly man in what seems to be a large house, when a woman’s scream is followed by a gunshot. He rushes in to find a dead woman and two bystanders.

The reader’s interest is fully engaged in this, the fourth and last Samuel Spade story. Once again, Sergeant Tom Polhaus and Lieutenant Dundy enter the case and we’re off on a wild ride, Spade solving the case with the police contributing essentially nothing.

Only half as long as “Too Many Have Lived,” this is the most enjoyable of the short stories and the most action-oriented. It has the elements that would have produced a good novella.

Spade is referred to as a ‘blonde Satan’ (which was utilized in the title of the Bette Davis Maltese Falcon adaptation, Satan Met a Lady). His face is frequently described as consisting of the ’V’s of his chin, mouth and brows. His eyes often turn yellow and are ’dreamy,’ presumably indicating they take on a faraway look. He does not come across as a handsome man: certainly not dapper, like Hammett’s Nick Charles.

We only see the intrepid Effie Perine (who was a miserable judge of character in The Maltese Falcon) in “A Man Called Spade.” The interplay with the boss, hinting at intimacy, is totally absent from the three stories. We don’t build on what we know, or suspect about the two, from The Maltese Falcon.

This is mildly disappointing, though perhaps the shortened format precludes a significant role for her. The romantic Spade is absent, with not even a flicker of female interest in any of the stories.

Spade does not hold out on the police in the three stories, which is certainly not the case in The Maltese Falcon. He doesn’t even have a client in “A Man Called Spade,” yet still solves the crime. Sergeant Polhaus serves as an errand boy and Spade and Dundy are on equal terms in the stories. 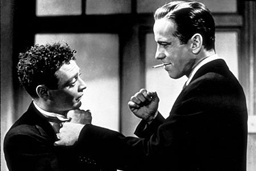 Spade, never afraid to get physical in The Maltese Falcon, roughs up the criminal in “A Man Called Spade,” though he gets the worst of it in “They Can Only Hang You Once.”

What’s missing in the short stories is the code of honor that permeates The Maltese Falcon. The impassioned speech that Spade gives to Brigid O’Shaunessey before the police arrive defined Spade’s character as a private eye. In the short stories, he’s just a detective trying to earn a living. There’s no particular reason to root for him: it’s hard to identify with him as a likable protagonist. 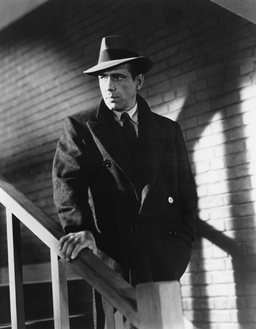 Sam Spade, as portrayed by Humphrey Bogart, is the image of a private eye to many people. That character is largely the same one that Hammett wrote about in The Maltese Falcon. Perhaps because Hammett didn’t really want to write more tales about him, the Spade of the short stories doesn’t measure up to the novel’s hero.

He comes across as less than fully fleshed out. One would expect these short stories to have come before the novel; that Hammett was developing the character, which fully bloomed in The Maltese Falcon.

But even though “Too Many Have Lived” and “They Can Only Hang You Once” are interesting stories, Spade is not all that interesting as a character. Hammett wrote the short stories to make money (which he spent as fast as he earned) and they come across as such. Nearly any tough private eye of the day could have been used instead of Spade and there would be little difference.

Of Spade, Hammett stated: “Spade had no original. He is a dream man in the sense that he is what most of the private detectives I worked with would like to have been and what quite a few of them, in their cockier moments, thought they approached. For your private detective does not…want to be an erudite solver of riddles in the Sherlock Holmes manner; he wants to be a hard and shifty fellow, able to take care of himself in any situation, able to get the best of anybody he comes in contact with, whether criminal, innocent bystander, or client.”

In The Maltese Falcon, we see Spade matching wits with Gutman, Cairo and Wilmer, the police, the district attorney, and Brigid O’Shaughnessy. It is this adversarial drive that is missing from the three short stories in Nightmare Town.

Humphrey Bogart and Edward G. Robinson played Sam Spade in radio adaptations of The Maltese Falcon in the forties.

Howard Duff, and then Steve Dunne, voiced Spade in a very popular radio series in the forties and fifties. The Adventures of Sam Spade lasted for over 240 episodes. Duff’s 1948 The Khandi Tooth Caper was actually a direct sequel to The Maltese Falcon, with Spade once again meeting Caspar Gutman and Joel Cairo (as well as Wilmer’s replacement).

Irrespective of the popular film and radio adaptations, The Maltese Falcon is a must read for any mystery fan. Though the three Sam Spade short stories don’t do much to enhance his reputation, they do complete his body of work.