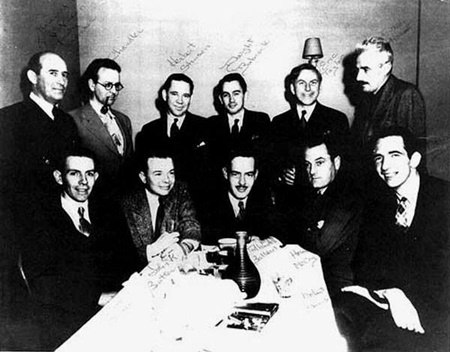 This is a pretty famous photograph in hardboiled/pulp lore. It’s of the attendees of the 1936 West Coast Black Mask Writers dinner. And it’s the only known meeting of Raymond Chandler and Dashiell Hammett. But there was a lot more writing talent present!

This post is going to focus on the man who was primarily responsible for making this gathering happen.

Dwight Babcock sent his first very first story to Underworld Magazine. They promptly lost it! He retitled it “At the Bottom of Every Mess,” and sent it to Black Mask, figuring he’d get a nice rejection letter. Instead, he got an acceptance letter and a $100 check. When most pulps were paying a quarter to a half cent a word, Babcock got a penny and a quarter cent per word for his first effort! 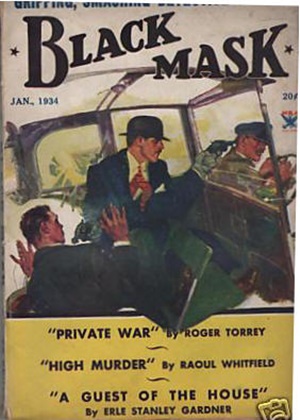 Underworld did find their copy of the story and returned it to Babcock: five months after it had appeared in the January, 1934 Black Mask.

Babcock broke into Dime Detective in August of 1934 and regularly appeared in the detective pulps for the next few years. Legendary Black Mask editor Joseph ‘Cap’ Shaw mistakenly identified a Babcock submission as having been written by W.T. Ballard (who you read about HERE). The two writers became lifelong friends through this mix up.

Shaw said, “We don’t mind the brutal characters in a story…We don’t mind the hard action; we want it; but we do want…a man that is a hero; a girl…that is every way likable and appealing – a man and a girl that the reader feels just must come through.”

Shaw wanted to take a little bit of the tough edge off of Black Mask. Babcock responded with G Man Chuck Thompson, who become a popular character.

James Cagney’s movie, G-Man, had been a big hit and that mini-genre was hot. Shaw wrote to Babcock, “…if you can wrangle out a sure-fire story each month for some months to come…”

Black Mask writers were expected to produce not only high quality, but high volume (the latter a requirement for survival as a pulpster).

Shaw added, “Let me know what you think and how soon you can deliver some red-hot ones. That shouldn’t be so hard, one a month, but they gotta be good.”

Babcock was very much one of Shaw’s ‘Black Mask Boys,’ and the editor helped guide him to agent Jane Hardy (the widow of Robert Hardy, she hadn’t fallen out yet with client Erle Stanley Gardner).

Shaw resigned as editor of Black Mask in September of 1936 after battling with the owner. He became an agent, and Babcock switched to him. Fanny Ellsworth, who succeeded Shaw as editor, didn’t seem to have as much interest in the writer. He had two stories in the Mask in 1937 (one of which Shaw had bought), and three each in 1938 and 1939. 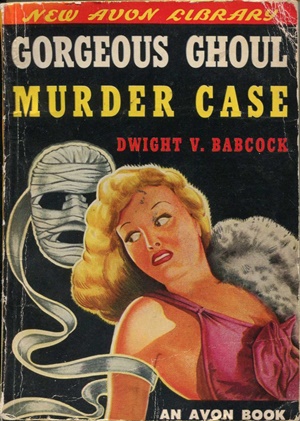 Ellsworth wasn’t interested in Thompson, only using one of those tales. Babcock had decided to write a novel, and he would effectively leave the pulps, writing three novels starring ‘Homicide Hannah, the Gorgeous Ghoul.’ She’s a beautiful, hardboiled writer and photographer for True Crime Cases magazine.

That book, along with The Gorgeous Ghoul, and Hannah Says Foul Play, are considered to be among the best in the comedic hardboiled school. Norbert Davis is perhaps the best-known practitioner in that field, and he and Babcock were west coast friends.

Babcock went to Hollywood in 1944 and became a successful screenwriter, with a multitude of horror movies to his credit. He also wrote for television. He would write one more novel, with Day Keene (who I wrote about here), Chatauqua. It became the Elvis Presley movie, The Trouble With Girls.

Shaw had tried to sell a collection of Babcock’s short stories, but was unsuccessful. That’s an effort still worth somebody’s time and energy. “Murder on the Gayway,” from the October, 1939 Black Mask, was reprinted in the Fall, 2017 issue.

I’m curious as to why Shaw didn’t include Babcock in his Hard Boiled Omnibus. There may be a story behind that which I’m not aware of.

With some encouragement from Shaw, Babcock worked hard to bring together various Black Mask writers who lived on the west coast. Along with those in the picture, it’s believed that Babcock reached out to H. Bedford Jones, Roger Torrey, Paul Cain, and Whitman Chambers – none of whom attended the dinner.

On January 11th, with Shaw cabling his regrets at not being able to attend, eleven Black Maksers gathered at the Nickabob Café. The photo provides evidence of the only known meeting between hardboiled giants Hammett and Chandler.  The attendees:

Raymond Moffatt – I know less than nothing about this guy. Literally.

Raymond Chandler – The only name unarguably placed alongside Hammett’s in the hardboiled pantheon.

Herbert Stinson – Stinson, police reporter for an LA newspaper, was a Black Mask regular, and his Ken O’Hara, a tough guy for The Los Angeles Times, appeared in over a dozen stories. 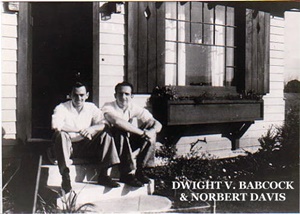 Dashiell Hammett – Not much needs said about the greatest hardboiled writer of them all.

Arthur Barnes – Barnes is best known for his science fiction stories, and I haven’t found any Black Mask appearances by him. Hmm…

Horace McCoy – Thomas Parker wrote about McCoy’s novel, They Shoot Horses, Don’t They?, for this column.

Norbert Davis – I wanted to write more about one of my favorite writers, but I did manage to do a post on his lawyer, Ben Shaley.

I don’t know of any other Black Mask gatherings. And I haven’t run across an account of this one. But there’s some pretty good writers in that picture.

And so, A (Black) Gat in the Hand comes to an end.

I thoroughly enjoyed reading well over a hundred short stories and novels for the column. And I had a lot of fun with the Back Deck Pulp posts over at Facebook.

There were topics I intended to write about, and researched, but never got down on the keyboard: like Joe Gores’ DKA novels, more Norbert Davis, and a Jo Gar post. And other topics that never got past the thought stage, like: Dashiell Hammett, the Powers Boothe Philip Marlowe tv show, and Robert E. Howard’s Steve Harrison (who I’ve written about before).

It’s possible I could bring the column back for a limited run in the future, though I’d have to immerse myself in a pulp/hardboiled mood again. And I think I’m covered for a little while. It will be Conan for the next half year. And Nero Wolfe is always calling to me.

Thanks to Frank Schildiner, Thomas Parker, Joe Bonadonna, William Patrick Maynard, and Andrew P. Salmon for contributing great essays. Heaven knows, I need all the help I can get!

BlackGate.com is a World Fantasy Award-winning website. And rightfully so. But there’s a mystery corner here as well. And it’s certainly not just me. A bunch of BlackGaters are fans of the genre. So, from time to time, you’ll find some mystery-related posts of note.

I hope the readers enjoyed this ‘toe in the pool’ look at a fantastic genre. There is some simply outstanding storytelling and writing in those old pulp stories. Especially, the hardboiled school – though by no means limited to that area.

So, this hardboiled keyboard shuts down.

Bob Byrne’s A (Black) Gat in the Hand appeared weekly every Monday morning at Black Gate in the Fall and Winter of 2018.

And he will be in the upcoming anthology of new Solar Pons stories!

I’ve really enjoyed this series. Thanks so much for all the hard work at it.

I hadn’t gone on a hardboiled kick for quite some time and it was great to immerse myself in that stuff again. And to read a lot of things for the first time.

Jo Gar has become one of my all time favorites. And I really liked Ballard’s Bill Lennox stories. And William Campbell Gault’s ability; to name a few things.

Paul Cain’s Fast One, Miller’s Crossing and Last Man Standing as excellent adaptations of Hammett novels, John D. MacDonald’s Judge Me Not – there’s a lot more I’d like to write about some day…

This was cool series, Bob. Thanks for all the write-ups.

Looking forward to the new Howard-focused column next week.

Hopefully, you’ll find lots of good stuff in the Conan series. I certainly think you will!

[…] to tackle. It’s conceivable that I could bring it back for a limited run in 2020 or 2021. Here’s a link to the last post for the column: about Dwight V. Babcock and the famous West Coast Black Mask Writers […]