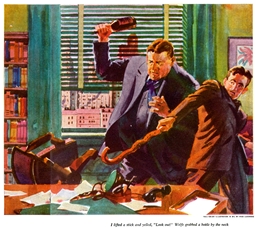 I’m writing this in the aftermath of hosting a sleepover for my son and three of his eight-year old friends. My state is…I don’t know what it is, but it’s not normal. I’ve been reading a lot of Nero Wolfe-related stuff lately, so I’ll riff on that. Speaking of the gargantuan detective, I wrote about him earlier here at Black Gate.

Back in September, I’m sure you read my post, “Who Needs a Hard Boiled Detective?” It looked at how, during the rise, rule and decline of the American hard-boiled school of fiction, August Derleth was writing Solar Pons stories that were pure throwbacks to the Victorian Era mysteries of Sherlock Holmes. I’d say more, but you already either know it or should go read essay if you haven’t!

And the following excerpt is from the initial version of “Hard Boiled Holmes,” an essay I wrote tracing the roots of the American hard boiled school back to Victorian London and Holmes:

Rex Stout created Nero Wolfe in 1934 and the last story was published in 1975, a month before the author’s death. Fortunately, there were over sixty Wolfe tales in between. Stout created a synthesis of Holmes and the hard boiled school that has yet to be surpassed.

Nero Wolfe was a brilliant, disagreeable and incurably lazy detective. He seems very much to be a successor to Mycroft Holmes, with a bit of Sherlock thrown in. His chronicler and assistant was the smooth talking tough guy, Archie Goodwin.

Goodwin himself stacks up with the best of the hard-boiled private eyes. To over-simplify, Stout paired Mycroft/Sherlock Holmes with Sam Spade. Two characters, representing the Doylean and hard-boiled approaches, worked together in each story. This characteristic is probably one of the primary reasons that the Wolfe books have enjoyed so much success over three-quarters of a century. 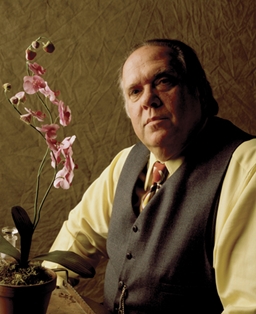 I’ve seen it asserted more than once that it’s not the plots that are at the root of the success of the Nero Wolfe stories. That’s a reasonable statement. We return to the tales time and again for the characters of Archie and Wolfe. Of course, we look forward to Fritz, Inspector Cramer, Inspector Rowcliff and the relationships between all the characters that come, go and live at the famous brownstone on 35th Street. But the Corpus is about Archie and Wolfe and what they do on the page.

And as I indicated above, the two represent a superb synthesis of the brilliant armchair reasoner and the tough, wisecracking private eye. If Wolfe went out and about on cases, his character would overlap with Archie’s, regardless of their differences. But Stout shrewdly split the necessities of a successful detective into two garments and clothed them on two different private investigators.

I was a latecomer to Wolfe, actually discovering him through the A&E television series in 2000-2001 (which I wrote about here). Far too short-lived, Maury Chaykin (Wolfe) and Timothy Hutton (Archie) starred in an excellent (and faithful) adaptation of the original stories. I’ll be doing a separate post on the show later this year. It is an excellent series and I am still re-watching episodes. 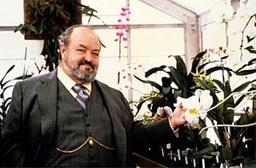 There had been a prior television series with William Conrad (Cannon) and Lee Horsely (Matt Houston, PI), set in the seventies. It is slated for release on DVD this year and you can also find it on youtube. Thayer David actually starred as Wolfe in the pilot, but then passed away, putting the series on hiatus for four years, at which time Conrad and Horsely took center stage.

There had also been a pair of big screen movies in 1936 and 1937 that Rex Stout so disliked, he never let Hollywood touch Wolfe again during his lifetime!

An alternative I cannot recommend highly enough is Michael Prichard’s audio book readings of the original stories. I have nearly two dozen and they are fantastic. They’re a regular part of my work commute and I’ve listened to each at least three times. Great readings of great stories: how could you get tired of them?

But all of this media palaver is really just a lead-in to a look at Wolfe radio shows: primarily one of them.

There were three radio series’ in the forties and fifties. The first, The Adventures of Nero Wolfe, lasted 51 episodes in 1943 and 1944 and featured three different Wolfes: J.B. Williams, Santos Ortega and Luis Van Rooten. It didn’t draw on Stout’s stories at all (Louis Vittes scripted the show) and you can listen to the only known existing episode, The Last Laugh Murder (believed to feature Ortega).

The second, The Amazing Nero Wolfe, lasted only 21 episodes in 1945 and starred Francis X. Bushman. Again, the stories were originals and scripted by Vittes once more. Click here for The Shakespeare Portfolio. 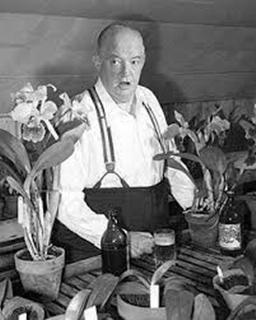 The third, The New Adventures of Nero Wolfe, is by far the best known. Lasting only six months and covering 26 episodes, it starred Sydney Greenstreet as Wolfe. Of course, The Maltese Falcon’s ‘The Fat Man’ certainly looked the part. Quite a few folks like Greenstreet and almost every episode has survived and is available on the Internet. I’m slowly warming up to this series, but I’m not yet quite on board.

Greenstreet sounds like Caspar Gutman pretending to be Nero Wolfe. Greenstreet’s Wolfe doesn’t at all sound like what I imagined. Unfortunately, they ran through six Archies. Regardless of who it is, this Goodwin is absolutely girl-crazy. In that regard, he actually comes across as a parody of Stout’s creation. It’s a variation on the ‘Watson is a doofus’ problem.

So, you’ve got a Wolfe who blusters far too much and a libido-driven Goodwin who constantly annoys Wolfe about the bank balance. I don’t find either character to be the embodiment of what Stout actually wrote.

Wolfe has also appeared in Italy, West Germany and Russia, but those are countries for another day. Also, Robert Goldsborough is writing authorized sequels; seven books between 1986 and 1994. I think overall, he did a nice job and I recommend them. After an eighteen-year hiatus, he returned to the brownstone in 2012, with the fourth book in this second series due out in March. So far, they’ve not yet been up to the standards of his earlier novels.

I like Sherlock Holmes, I know Solar Pons and I enjoy watching David Suchet’s Hercule Poirot, but Nero Wolfe is the first and foremost detective for me.

Stout first published Wolfe stories in 1934, and Hollywood was rolling out Wolfe movies in 1936 and ’37? Clearly, Nero Wolfe was a success right out of the gate.

I enjoyed reading the stories and a few of the novels, with perhaps an exception for the one in which Archie starts off the narration by saying how he dislikes people named “Eugene”.

If I remember correctly, I think that Rex Stout actually liked Walter Connoly’s portrayal of Wolfe in the second film, but not the movie itself.

When I do a post on the A&E tv series, I’ll have a still from a never-aired tv project with a young William Shatner as Archie.

I re-read that story with the anti-Eugene bias within the last year, but I don’t recall which one it was.

After collecting dust on a shelf for literally twenty years, I recently pulled down my sole Rex Stout volume, The League of Frightened Men, and gave it a whirl. (What I meant was that the book had been collecting dust for twenty years, not that I had been; not sure if that was clear.) I was delighted and plan to read more of Nero and Archie’s adventures. Any recommendations?

I look forward to seeing Mr. Shatner as Archie Goodwin.

And the anti-Eugene story is “Instead of Evidence” (which I just discovered was originally published as “Murder on Tuesday”). You may recall it as the exploding cigar story.

My first encounter was Some Buried Caesar, one of the few books in which Wolfe and Archie aren’t in New York, so that was a bit of an anomaly. I loved it so much, however, that I’ve read not only all the Nero Wolfe books, but most of Stout’s other crime novels.

Thanks for the introduction to the audio books. I’ll see if I can get my hands on them.

Thomas – ‘Some Buried Caesar’ was one of the first I read and it remains a favorite. As are ‘Death of a Doxy’ and ‘Black Orchids.’

Because I’ve been re-reading these for years now, I generally prefer the shorter novellas (usually 3 or 4 to a book) to the full length novels, so I would get a couple of the collections and see what you think of the quicker reads. ‘And Four to Go’ includes three holiday-themed stories, which is kind of fun.

The books all take place in the year they were written, but the characters don’t age (trust me: it works). So reading them in order is nice if you can get the books that way, but that’s not how it worked for me. I read them randomly. ‘League’ was the second book, so you got an early one.

Having said that, there are a couple I definitely would read in order:

‘Over My Dead Body,’ before ‘The Black Mountain.’ And maybe hold off on ‘Mountain’ until you’ve read several of the ones that came before. A series character dies in ‘Mountain’ and it’s probably more enjoyable to encounter that one a few times first.

Arnold Zeck is Wolfe’s Moriarty. I would absolutely read ‘And Be A Villain,’ then, ‘The Second Confession’ and finally, ‘In the Best of Families.’ Imagine reading ‘The Empty House’ before ‘The Final Problem.’ Zounds!

Eugene – I liked Archie’s visit to the factory in that one. And it’s got a pretty good plot twist.

Violette – I’ve gotten my Prichard audio books used; usually from Amazon. They’re almost never cheap. I think they’re available at audible.com, but I don’t use that.

I think it’s the Wolfe-Goodwin relationship that makes the stories work, even when they’re away from the home base. Though I certainly think that they just feel “right” when he’s working out of the brownstone.

[…] As I wrote here, there was a Wolfe radio series starring Sidney Greenstreet. It’s fair, at best. But I went ahead and took one of the episodes and turned it into an 11,000 word story. There are a few changes here and there, but I kept as much of the original dialogue and scenes in place as a I could. […]

Coming to this late but if you get the chance to listen to any of them Saul Rubinek recorded several Nero Wolfe stories, such as “The Doorbell Rang” and “The Red Box”. I know folks love Micheal Prichard but I just think that Mr. Rubinek does an amazing job voicing or bringing to life both Archie and Wolfe.

Nordik2230 – I really like Saul Rubinek. I was pleased to see him in several of the Jesse Stone movies, starring Tom Selleck. I’d like to hear him reading Wolfe.