As we close out 2018, I’m proud to look back at the last twelve months and all the new authors we’ve championed and celebrated. Dozens of debut novels, and hundreds of new short stories, from a lively graduating class of SF and fantasy writers. Of course, Black Gate isn’t just about the new — we try to spend just as many pixels illuminating the neglected writers of the Twentieth Century, who become more forgotten with each passing year.

We published hundreds of reviews, retrospectives, and Vintage Treasures posts about the forgotten greats of the genre here at Black Gate in 2018. But some of my favorite articles appeared at other venues, including Unbound Worlds, the B&N Sci-Fi & Fantasy Blog, and The Verge. One of the better writers showcasing classics this year was James Davis Nicoll, who in a September article at Tor.com asked Who Are the Forgotten Greats of Science Fiction?

To answer the question he looked at the Cordwainer Smith Rediscovery Award, which he rightly laments as underappreciated (“I wish the award were more widely known, that it had, perhaps, its own anthology. If it did, it might look a bit like this.“) James did his part to promote the award by showcasing the winners, including masters such as R.A. Lafferty, William Hope Hodgson, Edgar Pangborn, Stanley G. Weinbaum, Leigh Brackett, Fredric Brown, Mildred Clingerman, and others. Here’s James on three of my favorites.

R.A. Lafferty (November 7, 1914–March 18, 2002) was not all that interested in plot. He excelled at setting and literary style. He’s not to everyone’s taste, but those who enjoy Lafferty’s work enjoy it intensely. Lafferty was sidelined by a long illness, during which time he was close to forgotten. In recent years publishers from Wildside to Centipede Press have brought his work back into print.

Our coverage of the great R.A. Lafferty at Black Gate includes:

See all our Lafferty coverage here.

Edgar Pangborn (February 25, 1909–February 1, 1976) was active as a mystery writer for twenty years before he turned to science fiction in the 1950s. His humanist science fiction won fan acclaim. His novel A Mirror for Observers won the 1954 International Fantasy Award. Many of his later pieces form the Tales of a Darkening World sequence, set after war, plague, and climate change have reduced humanity to a tiny, barbaric remnant of today’s civilization. 1964’s Davy may be the best known in the series; I prefer the melancholy collection Still I Persist in Wondering. If read in publication order, Tales of a Darkening World betrays Pangborn’s increasingly pessimistic view of humans. Some early pieces are available on Gutenberg. SF Gateway’s Edgar Pangborn Omnibus is also in print.

Because it’s part of our value-add here at Black Gate, here’s the back covers to all three classic paperbacks above.

William Hope Hodgson (15 November 1877–19 April 1918) predated today’s formalized genre boundaries. One might think of him as working somewhere in the intersection of weird fantasy and cosmic horror. His best known works are the dying-Earth horror novel The Night Land and the hallucinatory The House on the Borderland. You may never have read either, but odds are you’ve read works influenced by one or the other. Hodgson died at Ypres, during WWI; hence several of his works are public domain and available at Project Gutenberg.

Read the complete list of James’ picks at Tor.com, and see all our recent Vintage Treasures right here at Black Gate.

Did you read any articles that highlighted forgotten classics of SF in 2018? Share your favorites with us in the comments.

I would put Wilson Tucker in this class. The Long Loud Silence is one of the best post-apocalypse novels ever.

And does anyone read Avram Davidson anymore? They should.

Wilson Tucker! There’s a name I don’t hear much anymore. And when I do, it’s because he popularized the trend of using real names in his books to honor friends and acquaintances, now fondly known as “tuckerization.”

My Abram Davidson Treasury is still one of my favorite collections.

Tucker’s first sf novel, The City in the Sea (1951), is not well thought of but it’s probably the best – if not only – work of its time to feature female leads in an almost all-female cast. Astonishingly, it hasn’t been reprinted in English since 1954.

T.L. Sherred is a writer whose works I remember as very high-quality and distinctly different. When I looked at his Wikipedia bibliography, I was surprised at the small size of his body of work. I definitely think he belongs in the pantheon of the great, obscure, and forgotten SF writers.

Tucker eh? He was an inspiration for Archipelago Magazine’s award system for their kickstarter campaign.

Charles L Harness was mentioned on this site, recently. He should surely be better remembered than he is. The Paradox Men is space opera at its best and at its most humorous. The Rose is just perfect. And what about William Tenn? Neil

> My Abram Davidson Treasury is still one of my favorite collections.

The Avram Davidson Treasury! I’d almost forgotten about it. It’s a very generous collection (447 pages) containing 37 stories, each one introduced by one of Avram/s friends and contemporaries. And what a list of names! Just check out the contributor list on the cover (click for bigger version). 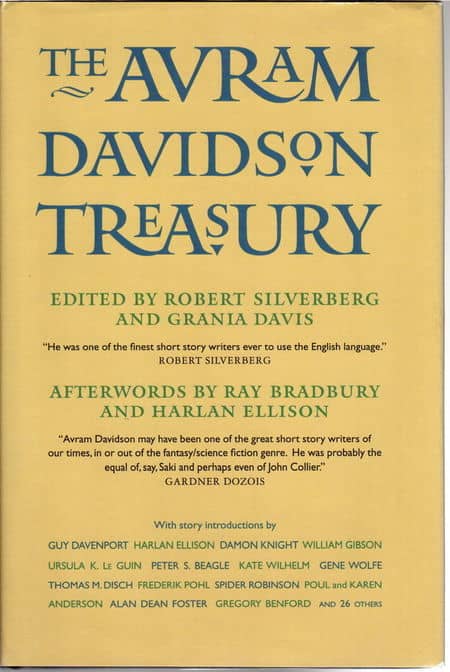 Thanks for the reminder about this terrific book. I bought a copy when it came out in 1998. New copies are still available on Amazon, in both print and digital versions — and the digital edition is only $7.99!

You may be the only person to have ever mentioned this book to me. I bought a copy years ago (and only because I was trying to complete my Galaxy Novel collection). The only thing I remember about it is the classic Emsh cover. 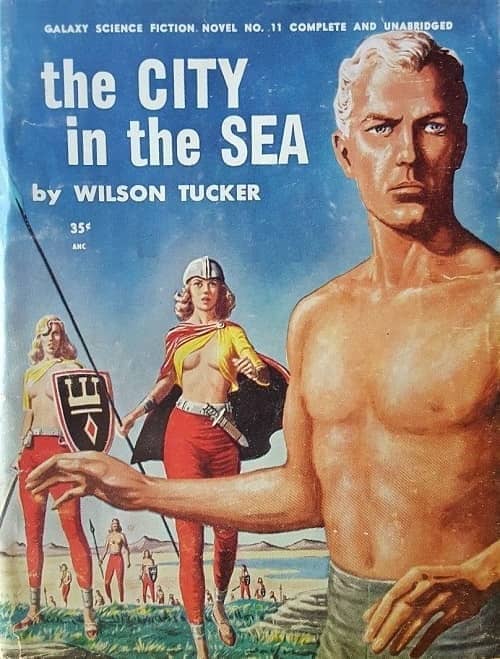 > T.L. Sherred is a writer whose works I remember as very high-quality and distinctly different.

Sherred is certainly an eclectic pick… the name is familiar, but I couldn’t name a single thing he’s written. What do you recommend I start with?

> The Paradox Men is space opera at its best and at its most humorous. The Rose is just perfect.

Charles L Harness is a great suggestion. I didn’t discover him in my youth, but after reading a few of Rich Horton’s enthusiastic reviews I went through a big Harness collecting phase four years ago, tracking down paperback copies of The Rose, Krono, Firebird, and all his other novels. I think I have almost all of them now. 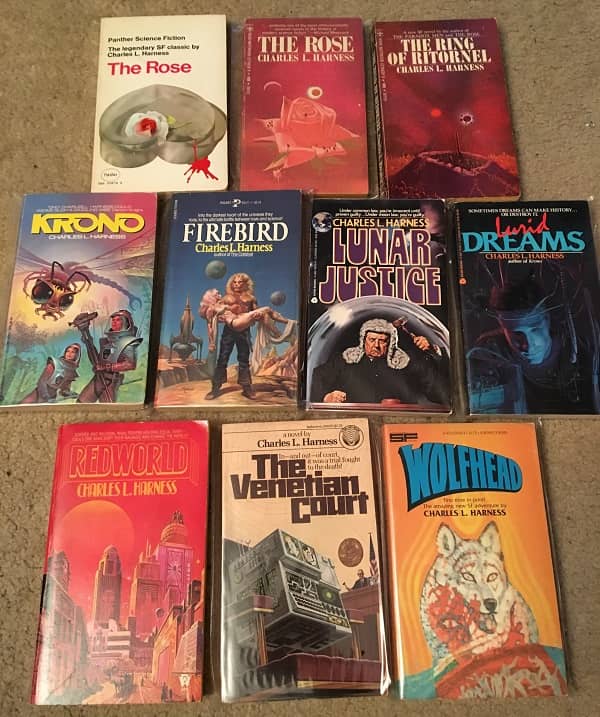 > And what about William Tenn?

I’m surprised Tenn hasn’t already won the award, to be honest… in fact, I had to go back and double check the list of winners to be certain!

But you’re quite right. I expect Tenn will be one of the frontrunners this year.

These are all great suggestions. The thing is, once you get past five or six BIG NAMES (Asimov, Heinlein, Clarke, Bradbury, Herbert, Dick) just about any significant SF writer of the 40’s, 50’s or 60’s could be put on this list.

T.L. Sherred: you would probably be able to find his only novel, Alien Island (1970). A second, unfinished novel, was posthumously completed by Lloyd Biggle Jr.: Alien Main, sort of a sequel. I haven’t read it.

Other than that, there were several short stories, which I no doubt read in various anthologies, not the original magazine versions, but this was 45 or more years ago. These will probably be hard to find.

Perhaps that’s true (although it’s debatable). But I still think the Cordwainer Smith Rediscovery Award is a terrific mechanism for promoting highly deserving writers from that era.

And no matter how many are eligible, the Award process itself is still highly selective. Let’s assume the Award runs (hopefully) for the next 30 years, and 30 more forgotten writers are showcased. I can guarantee you that a lot more than 30 writers (including a whole lot of folks working today) will fall out of print and into near-total obscurity over the same period.

The Cordwainer Smith Rediscovery Award is a great way to celebrate forgotten writers, but it doesn’t begin to truly counteract the inevitable march of time, and the fickle memories of readers. It’s a fine start though and, looking at that list of winners, I’m satisfied the selection process is top-notch.

Thanks for the list. I will definitely check him out.

I wasn’t denigrating the award – far from it – just pointing out that so many fine writers are in danger of being forgotten that a dozen yearly awards wouldn’t cover the field.

Thomas — I certainly didn’t think you were. I guess my point was that, yeah, while there are a huge number of worthwhile authors to choose from (and the number grows every year), I think that makes the winners of the Cordwainer Smith Rediscovery Award increasingly significant.

Don’t know if it means it will become a major Award, though. Here’s hoping!

I don’t mind saying that (with the obvious exception of CAS), just about every name on this list was something of a surprise. I guess it means I need to learn more about each of these folks.

[Also, Robinson just died a few years ago…. makes me wonder what the rules for eligibility are.]

I’d very loosely include Lord Dunsany into the mix.

Loosely for he had lots of work in fantasy and ‘magical realism’.

BUT – he also had a lifetime correspondence with Arthur C. Clarke after the latter wrote an angry letter about him speculating on Moon Men, both due to the unlikeliness of life of any sort on the Moon – and the way he described orbital mechanics was so off… Instead of “How DARE you spit on my art with your petty….” Dunsany started writing back and they shared letters across his lifetime. Also explains why his first, rough novel “The Lion of Comarre” does sound a lot like a Dunsany yarn.

Lovecraft was a big Dunsany fan – kind of like on “Just Shoot me” when the main character meets Mark Hamill – “Uh, you are the guy who appeared as a Stormtrooper at the convention last year. EVERY convention, and I went to 6 in different cities across the USA…” Dunsany kind of brushed him off, but works like and especially “The Dream-Quest of Unknown Kadath” are “The Sincerest form of Flattery”

However, Dunsany also made “The Fortress Unvanquishable save for Sacnoth” – which is credited as the first modern “Sword and Sorcery” adventure.

The latter two examples are fantasy of course, but the type of fantasy that had a big influence on science fiction. Even “Hard” science fiction for if you’ve both read Dunsany and Clarke the influence (not imitation) is obvious.

Another one I’m really surprised isn’t mentioned here is Olaf Stapledon – neat YouTube “Extra Credits SciFi” going to some of his works in forgotten foundations.

IMO the best “In a nutshell” is his work “Star Maker” is the “Dr Caligari” of scifi. Anyone know a film buff trying to force you to watch that ancient, clunky German Expressionist movie that belongs in some student’s dumb college art project that makes the parents worry for his future? Well, when you finally sit down and WATCH it you go “Uh, I saw that scene elsewhere” like every few minutes… The most obvious one reading this will recognize is the bridge from “Nightmare before Christmas”. Well, in “Star Maker” there’s stuff that take 3 paragraphs that people have made sci-fi trilogies with. Not going to spend hours typing examples, just check the text and if you are a big sci-fi buff you’ll go – …. wrote novels expanding on this in his/her …. series. Every few PAGES for the most part.

Brian Aldiss called Star Maker “the one Great Grey Holy Book of science fiction.” A great book for sure, but not the easiest read in the world.

I think Dunsany’s “Idle Days on the Yann” is the greatest fantasy short story ever.