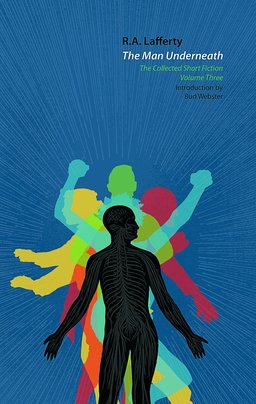 He laid down a road paved with bright, deadpan madness for us to walk, mouths agape and eyes wide with wonder and trepidation.
– from the introduction by Bud Webster

Let’s talk about R. A. Lafferty. You may have heard of him before: a wild, raggedy old man from Tulsa, Oklahoma, whose work showed up in magazines and the pulps from the sixties to the eighties, who ranged through conventions for a while (according to legends always polite and often drunk), and whose writings rode the New Wave through its crest and recession.

Lafferty had a style that was utterly unique and impossible to imitate. (People have tried.) His short stories were difficult to categorize, and his novels were nearly impossible to read. Nowadays his work is largely out of print and hard to find. His short fiction is scattered across a hundred shores of old magazines, obscure chap-books, and out of print collections. A few of the more well-known ones, like “Narrow Valley,” turn up now and again in anthologies, but the majority are lost, and so one of the strangest, strongest, most distinctive voices from speculative American fiction comes through, if at all, garbled and faint and haunting.

All of this has changed with the publication by Centipede Press of the Collected Short Fiction of R. A. Lafferty, an ongoing series of gorgeous small press books of which the third volume is out and the fourth is on the way. When I say gorgeous, I mean well-designed hardcovers with cloth ribbon and a price point for serious collectors or for library purchase. (Making friends with librarians is my strategy for getting ahold of books like these.) But each volume succeeds in capturing and displaying the varied short stories of Lafferty, splaying them out on the page like a bizarre and beautiful Lepidoptera collection. Lafferty is most alive in his stories, and the random structure of each collection, which are not organized by chronological or any other logical arrangement, means you can step into a good representation of his work with any volume.

Lafferty lives and breathes story. This might seem a truism, especially because most writers of science fiction and fantasy consider themselves crafters of short stories. But most of us, I suspect, build stories with our heads and occasionally our hearts. Our stories percolate up out of those places and are then carefully shaped and crafted on the page. Sometimes they find themselves stilted and deadened in this transition. But Lafferty builds stories with his gut. He opens his mouth (which is the only way to explain what happens when you read his words; they’re waiting there on the page not to be read but to be heard) and sparking, crackling, skull-splitting tales spill up and out.

Oh, there are plenty of magics on Earth, but moon-magic is in a different category completely. Every group of kinds should have a moon of their own.
– “You Can’t Go Back”

Labels are problematic in describing Lafferty’s writing. He certainly borrows tropes from science fiction, though he translates them through his wooly, larger-than-life lens until it feels like he’s telling an American tall tale, even though it takes place off Earth. Take for example “Snuffles,” which appears in this volume and is another fairly well known Lafferty piece. The setting is straightforward: a group of scientists studying the flora and fauna of a newly-discovered world. But when the single large inhabitant, a semi-intelligent ursine the team of scientists had dubbed Snuffles, turns on them, the story becomes something much more gruesome, rollicking, and hallucinogenic.

Or my personal favorite, “Nine Hundred Grandmothers,” in which a team of Buck Rogers-type space explorers (and the way Lafferty pokes fun at conventional tropes with the characters he creates is one of the many things that makes his work so enjoyable) discover an asteroid on which the alien inhabitants never die. Instead of doing the obvious and exploiting this ability, the protagonist of the story become obsessed with the fact that the ancients of this world — who decrease in size and activity as they age — would have “seen the very beginning” and “know how it all started.”

Both of these stories are examples of a theme in Lafferty’s work: he contrasts the certainty and confidence of the space age with the absolute weirdness and absurdity of the universe. But where someone like H. P. Lovecraft used this to illustrate the inhuman terror of space, for Lafferty it’s about the hilarity of this strangeness played out against human hubris.

Lafferty is not always accessible. The nineteen pieces in this third volume of the Collected Short Fiction give a good scope of his work, from easy to hard. Pieces like “Thou Whited Wall” or “The Funny Face Murders” are rather difficult and obscure, though Lafferty’s style and tone is consistent throughout. Some of the pieces reflect Lafferty’s engineering background, including the faux-documentary “Selenium Ghosts of the Eighteen Seventies,” which discuss the technical as well as artistic aspects of the first kerosene-powered, selenium-based motion pictures of the late nineteenth-century. Many of the works in this volume involve the eccentric inventor and scientist Barnaby Sheen working in modern Oklahoma, creating devices that test the metaphysical boundaries of reality. “What Big Tears the Dinosaur” features these characters, including Barnaby’s Australopithecus houseboy, as well as “The Hellacious Rocket of Harry O’Donovan” and “The Wild World of Barnaby Sheen.” In this same vein, though with different characters, was what I thought perhaps the most effective piece in the collection, “Through Different Eyes,” in which a scientist creates a device that allows him to see the world as other people see it.

If you are real inventors, you will find a way to make a building and a business out of this kit. If you are not real inventors, then you shouldn’t have bought an Invention Kit in the first place. It’s lucky you find out now that you don’t have what it takes.
– “The Funny Face Murders”

There’s a crazy, gruesome, shuddering laughter throughout all Lafferty’s work that needs to be experienced rather than described. And many readers are experiencing it, spurred by collections like this one as well as a sort of Laffertian renaissance underway partially through the recommendations of other writers who have been influenced by him, such as Gene Wolfe, Neil Gaimon, and Michael Swanwick. More than anything, what all of these stories have in common is the sense that Lafferty is telling a raucous tall tale. His language is that of the old American west without being a Western. It’s ridiculous and gaudy without being affected. It’s real. It’s a language of tall tale and myth, and it deserves to be heard again. The Man Underneath (or any other volume of this series) is a great place to begin.

Put your hand to it if you have the surety about you, if you are not afraid of green snakes in the cup (they’ll fang the face off you if you’re afraid of them), or of clay-mud, or of comet dust, or of the rollicking world between.
– “Boomer Flats”

Stephen Case has published fiction at Beneath Ceaseless Skies, Orson Scott Card’s Intergalactic Medicine Show, and Daily Science Fiction. His reviews have appeared at Fiction Vortex and Strange Horizons, as well as his own blog, stephenreidcase.com. His last review for us was The Language of the Night by by Ursula K. Le Guin.

Just an F.Y.I., the fourth volume of Lafferty’s collected fiction is out from Centipede Press. I’ve had it on my shelf for a while now.
http://www.centipedepress.com/sf/manspeckledeyes.html

Fourth Mansions was the one of his novels that I found pretty readable. Obviously it has its own logic that is not the same as non-Lafferty novels, but it’s good tall tale when you accept that.

Methinks I haven’t read enough Lafferty. This article makes me want to remedy that. Thanks!

[…] Gate “The Man Underneath: the Collected Short Fiction of R. A. Lafferty, vol. 3” “The Language of the Night, by Ursula LeGuin” “Howl’s Moving Castle, by Diana Wynne […]

The Best of R. A. Lafferty, Edited by Jonathan Strahan – Cyber Dev

[…] Sale NiSepsisred Grandmothers Annals of Klepsis R.A. Lafferty, the Past Master of Science Fiction The Hilarity of the Strange: The Man Underneath: The Collected Short Fiction of R. A. Lafferty, Volu… by Steve Case Birthday Reviews: R.A. Lafferty’s “Sodom and Gomorrah, Texas” by Steven H […]