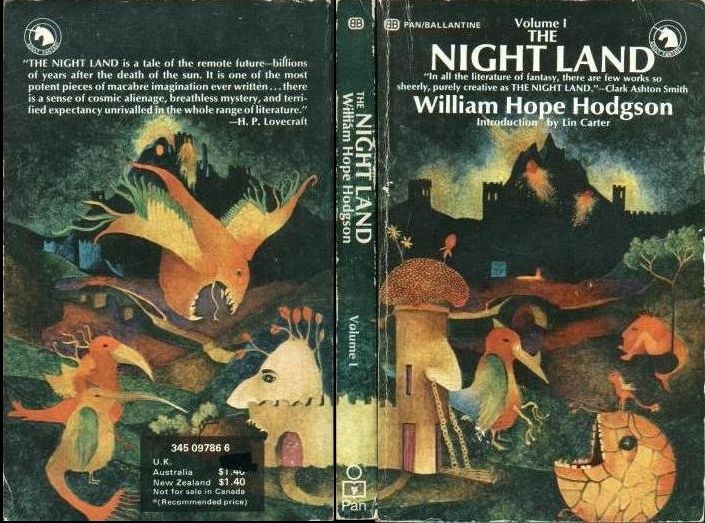 If you’ve at any point heard some rumors, some whispers, some strange buzz about this book by William Hope Hodgson called The Night Land… maybe you’ve heard it is one of the greatest works of horror or dystopian dark fantasy…but you’ve also heard that it’s practically unreadable because of Hodgson’s choice to write it in a very weird prose style…”Penned in 1912, The Night Land is considered by many to be a work of genius, but one written in a difficult, archaic style that readers often find impenetrable.”

In 2010, James Stoddard (a fantastic fantasy author in his own right) wrote a “translation” into a more modern, readable vernacular. If you’re thinking of maybe reading Stoddard’s version, I must tell you this:

DO IT. Sooner rather than later. The fact is, one of the all-time great masterworks of sustained horror and imaginative vision, was, unfortunately, self-hampered by its author with his choice of writing it in a clunky, pseudo-archaic language. Stoddard did a supreme service to all of us by simply adapting the work into accessible modern English. I read Stoddard’s version, and via that gateway discovered what all the fuss was about. Yes, it really is that great an achievement: If Hodgson had written it in more accessible language, it would be as well known and celebrated today as any of the other seminal works of horror, fantasy, and science fiction.

The Night Land: A Story Retold is available on Kindle for $3.99 and in paperback for $11.99 through Amazon, as well as audiobook through Audible! 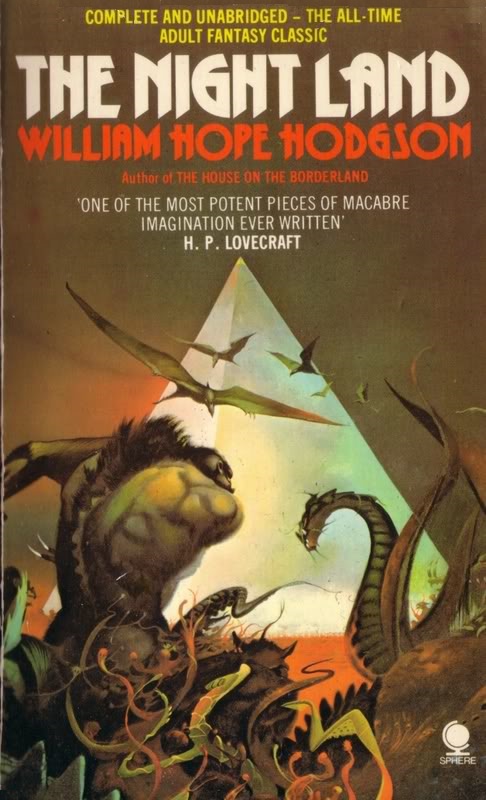 You can read a more complete overview of Hodgon’s work and Stoddard’s “collaboration” in this 2014 post.

You can read our interview with Stoddard about adapting the work of one of the greats in this 2016 post.

Spurred by your comment on The High House, I just started Hodgson’s original 2 weeks ago. Rough going at first, but then WHH’s off-kilter rhythm takes hold and the beautiful weirdness takes hold.

John R. Fultz, Darrell Schweitzer, Gabe Dybing, and I have been engaged in a discussion over on Facebook today about whether WHH’s pseudo-archaic prose 1) adds to the strange impact of the book or 2) is a distracting stumbling block.

If Stoddard’s alternative had not existed, I would have (eventually) forced myself to read the original. Gabe, who knows my taste better than anybody, told me I would like The Night Land and WHY I would like it.

The reason I didn’t just go ahead and read the original was because of my experience with an earlier Hodgson novel, The Boats of the “Glen Carrig.” I read that book like a junkie fiend devouring it for the haunting story it told, but through the entire experience there was a critical part of my brain that kept distracting me with “Why doesn’t he say what any of these people’s names are?” and “This would be even more interesting if the narrator actually quoted some dialogue instead of just paraphrasing everybody.” As I’ve said elsewhere, reading “Glen Carrig” was the one time in my life I had the experience of thinking, “Wow, what a great story — I so want to rewrite it.”

I knew that that part of my brain might be similarly bothersome while working through The Night Land, so I pre-empted it by reading Stoddard’s version — someone who obviously had a very similar reaction reading a Hodgson book.

It may well be true — Gabe and John agree on this score — that the pseudo-archaic Hodgsonian prose reinforces the strangeness of the story. But I can at least testify that the story itself…Well, like the rest of us on this thread, I’ve read a lot of strange stuff in my life and, now in my forties, it’s rare I come across anything that feels like truly a new imaginative literary experience. But Hodgson’s vision came through to me. I liked it — was bowled over by it — and for the reasons Gabe said I would like it.

The terrifying sense of awe and strangeness he achieved in that work has been tapped into by very few of the practitioners of weird fiction: Lovecraft, Clark Ashton Smith, Blackwood, Thomas Ligotti at times. But the sheer size and scope of the work is beyond anything any of them did either. As Smith said, “so sheerly remarkable, so purely creative…” And when Lovecraft declared it “one of the most potent pieces of macabre imagination ever written,” I can agree with him, even from having received it “secondhand,” so to speak.

For me, hearing someone declare a book impenetrable or unreadable is like waving a red flag in front of a bull. So off the shelf comes my decades old paperback (it’s the Sphere edition pictured at the bottom of the post), and the vow is made – time to read this sucker!

Just as soon as I’m done with Anna Karenina. Should be an interesting contrast!

I’ve read & enjoyed both versions, although the original required quite a lot of effort and multiple tries. Next time I read it will probably be the Hodgson original, just because that’s what’s up next in my Night Shade Collected Fiction set.

I have the Pan/Ballantine edition pictured at the head of this article and read the whole lot way back when I was a teenager, (early 1970s). But it should be pointed out that for this edition Lin Carter edited the text, abridging it. Even so, it is still a difficult read. That said, this did not put me off and I remember that I thought it a magnificent novel. After that,I sought out and purchased whatever Hodgson I could find but I have never tried to reread The Night Land.