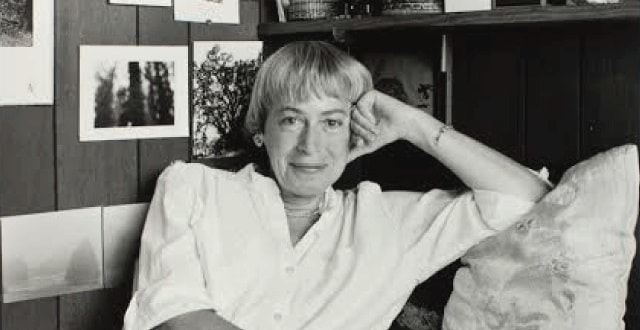 Ursula K. Le Guin, one of the greatest SF writers of the 20th Century, died yesterday.

Le Guin was equally at home in both science fiction and fantasy, and won virtually every accolade our field has to offer. Her novel The Dispossessed (1974) won the Locus, Nebula, and Hugo Awards, The Left Hand of Darkness (1969) won both the Hugo and Nebula, and her Earthsea novel The Other Wind (2001) won the World Fantasy Award. The third Earthsea novel, The Farthest Shore, won the 1973 National Book Award. She won the Hugo Award in virtually every category available to writers, including Best Short Story (“The Ones Who Walk Away From Omelas,” 1974), Best Novelette (“Buffalo Gals, Won’t You Come Out Tonight,” 1988), Best Novella (The Word for World Is Forest, 1976), and Best Related Work (her essay collection Words Are My Matter, 2016). She won the Locus Award a record nineteen times. Unlocking the Air and Other Stories was one of three finalists for the 1997 Pulitzer Prize.

In 1995 Le Guin was presented with the World Fantasy Award for Life Achievement, and in 2003 she became a SFWA Grand Master Award, the highest honor bestowed by the Science Fiction Writers of America. The Science Fiction and Fantasy Hall of Fame inducted her in 2001, and in April 2000 the U.S. Library of Congress made her a Living Legend in the “Writers and Artists” category. In 2016 The New York Times described her as “America’s greatest living science fiction writer.”

Ms. Le Guin embraced the standard themes of her chosen genres: sorcery and dragons, spaceships and planetary conflict. But even when her protagonists are male, they avoid the macho posturing of so many science fiction and fantasy heroes. The conflicts they face are typically rooted in a clash of cultures and resolved more by conciliation and self-sacrifice than by swordplay or space battles. Her books have been translated into more than 40 languages and have sold millions of copies worldwide. Several, including The Left Hand of Darkness — set on a planet where the customary gender distinctions do not apply — have been in print for almost 50 years.

Beyond all the awards and accolades, Le Guin remained an active voice in the field, speaking out in support of her fellow science fiction writers. When she received the Medal for Distinguished Contribution to American Letters from the National Book Foundation in 2014 she praised her fellow SF authors in her acceptance speech, and she famously declined the Nebula award for her novelette “The Diary of the Rose” (1976) to protest SFWA’s treatment of Stanisław Lem.

While the work of most of her contemporaries remains long out of print, Ursula K. Le Guin’s novels and short stories remain widely popular today, and in the past two years she has been celebrated with high profile reprint collections including the two volume Collected Short Fiction of Ursula K. Le Guin from Saga Press, and the beautiful boxed set The Hanish Novels and Stories from the Library of America. 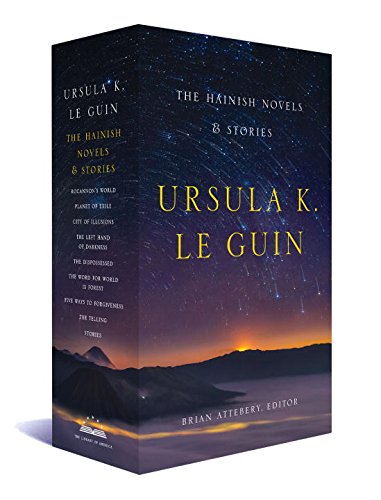 Our previous coverage of her remarkable career includes:

Something of her charm comes across in this brief response here:

Very sad. Aw man we are barely into the year! Janus is still looking back at 2017 and already we have another great leaving us.

A true luminary; and rare not only in the humanity of her work but in her own generous nature. Many writers who achieve the level of fame and accomplishment she did would not be so giving of her time, but she responded to letters and sent autographs to fans who requested them throughout her life.

I corresponded with her once. I was preparing to teach a college course on modern fantasy and asked her which one work of hers she might recommend for such a class (I didn’t want more than one work on the syllabus by the same author and, with her, so hard to whittle it down to one — so maybe a little direct input from the author would help narrow the field, eh?). I also asked her if she might send me a couple extra autographed book plates (which she would send out to people who requested an autograph) that I could give away as prizes during the course.

She responded with a thoughtful letter (and sent the extra bookplates).

What a great story! I’ve met and had wonderful conversations with many of my favorite writers, but with her, I never had the pleasure. I envy your brief connection with her.

I am profoundly saddened by this. I read “The Wild Girls” and “Words Are My Matter” late last year, have nearly finished “No Time to Spare” this week, and just ordered “Changing Planes” yesterday. I’d planned on checking out her blog later this week and seeing if I could post a comment, hoping to thank her for many, many years of enjoying her wonderful work. She was on a panel at one of the two Worldcons I attended in the early ’70s, and she was thoroughly captivating. “The Left Hand of Darkness” was required reading for the science fiction class I taught at a local college, and that novel generated some of the best discussions I could have hoped for. My three daughters cut their fantasy teeth on the Earthsea books, the only SF/Fantasy books I ever loaned out. This one hurts.

I was 23 in 1973 when I read “The Ones Who Walk Away from Omelas,” and I was blown away by it. I became an attending member of Discon II in 1974, and voted for Le Guin’s story as best short story of 1973. The group I was with couldn’t afford the awards dinner, but we were allowed in to watch the announcements of the winners and the presentations of the awards. Can’t describe the thrill I felt when “Omelas” won the award. Overall, my vote meant nothing, but for the first time, I had a sense of belonging to something — the SF community — in a way that nothing else has ever made me feel. Thank you for that, Ursula K. Le Guin.

Ursula was one of the teachers at the 1972 Clarion West Workshop. We followed her around like ducklings. Yet she never condescended and joined us at all hours in seriousness and fun. She did even more for me. One sunny afternoon a group of us sat out on the grass and composed stories, flash fiction as we would call it today. She was so taken with mine that she got her agent, Virginia Kidd, to place it in a magazine, my first professional sale. What better encouragement for a career in the field could anyone ever receive? When we met decades later she remembered me instantly. She may have been the finest person in sf I ever got to know.

> Something of her charm comes across in this brief response here

I love that she would get involved in a fannish discussion about falcons in her work. I think that reveals a lot about her affection for the genre.

> I read “The Wild Girls” and “Words Are My Matter” late last year, have nearly finished
> “No Time to Spare” this week, and just ordered “Changing Planes” yesterday.

I envy you that you were already immersed in a Le Guin reading blitz. It’ll be a while before I can clear the decks the way I want to… and when I do, I’m going to crack the shrinkwrap on this beauty:

> for the first time, I had a sense of belonging to something — the SF community
> — in a way that nothing else has ever made me feel. Thank you for that, Ursula K. Le Guin.

What a fabulous story (and I agree with you absolutely on “The Ones Who Walk Away From Omelas.” I believe it is the finest science fiction story ever written.)

Thank you for sharing it.

> She was so taken with mine that she got her agent, Virginia Kidd, to place it in a magazine, my first professional sale.

Wow! That’s amazing, and I had no idea. What was the story?

I envy you your connection to her, however brief. I wish I’d managed to make it to some of the West Coast cons she attended in the 80s and 90s.

Sad to hear of her passing.

I remember in particular “Planet of Exile” a book I read way back and probably still have somewhere.

John — I already had all the Hainish novels, most in their original paperbacks, but I simply could NOT pass up on the 2-volume slipcased Library of America boxed set, or the LoA Orsinia Tales volume. I also bought those two massive collections published last year by Simon & Schuster, “The Unreal and the Real” and “The Found and the Lost.” I’m missing the odd volume here and there, but I’m so glad I bought most of this new, so that she was able to get some small return for her efforts from readers like me. I’ve been a dedicated reader of SF, Fantasy, & Horror for roughly 3/4 of my 67 years, and although I subscribe to Ted Sturgeon’s comment that “90% of SF is crap,” I have in the past willingly, lovingly slogged through 9 bad or mediocre or not-quite-great stories to get to that one gem. And Ursula K. Le Guin consistently provided me with that gem. I am truly going to treasure those works of hers I have yet to experience.

Sad to hear. In my ethics classes I have my students read “The Ones Who Walk Away from Omelas” every year. No philosophical argument can as powerfully criticize strictly utilitarian ethical perspectives like that story.

John, the magazine was the Autumn/Winter 1973 edge, a special science fiction issue of an Australian literary magazine. They got an amazing collection of American big names, all of whose works I assure you was better than mine. Here’s the URL from the ISFDB. http://www.isfdb.org/cgi-bin/pl.cgi?415210

I read The Earthsea Trilogy over thirty years ago. Was ‘meh’ about it. I think I read Tehanu later – I know I bought it.

I didn’t dislike Le Guin, but she was never in my top twenty of fantasy authors.

True story, when I was like 10 or so (like 1979 or so) I stumbled onto some kind of show like “reading rainbow” and they were reading that terrifying scene out of “Wizard of Earthsea” where Ged is raising the ghost of the dead princess. Doubly terrifying when you are 10!

But! I didn’t actually catch the name of the book! Fast forward to 2008 and I’m on a backpacking trip, stuck on the side of a hill in a tent, in a thunderstorm, reading “Wizard of Earthsea” and I get to that scene. Worth the risk of getting struck by lighting!

The Tombs of Atuan was my first Le Guin. I was 12 and home sick from school. My mother, who’s always been allergic to SF/F, nonetheless went to the library and checked out a new book for me to read. I descended into the tombs with Tenar and read the whole thing in one sitting. My understanding was a child’s understanding, but I knew I wanted to be able to write like that.