The Ace Doubles were a fairly low-paying market by most measures, and they didn’t always attract top authors. But they did publish early books by many writers who would go on to become top authors. Such is the case with the pairing of Rocannon’s World, the first novel by the great Ursula K. LeGuin, and The Kar-Chee Reign, an early novel by SF master Avram Davidson.

Rich Horton examined both novels as part of his ongoing series of Ace Double reviews at his blog Strange at Ecbatan. Here’s what he said, in part:

Seeing that Ursula K. Le Guin’s first novel was an Ace Double came as a mild surprise to me, some time back when I encountered this pairing. Since then I’ve realized that that wasn’t really that rare, for example, Samuel R. Delany also had early novels published as Ace Doubles, as did many other great writers…

Rocannon’s World is a curious novel. It is a “Hainish” novel, thus fitting into Le Guin’s main “future history,” but it doesn’t seem wholly consistent with novels like The Left Hand of Darkness and The Dispossessed. What it mainly is is a fantasy novel with SF trappings. Except for the prose, which is excellent as one might expect from Le Guin, it feels strikingly pulpish. The plot and feel would not have been out of place in an early 50s issue of Planet Stories…

Fomalhaut II is a planet which has only been lightly explored by the League of All Words (in later novels, the Ekumen). The League does not even know how many intelligent races live there… After the ethnologist Rocannon encounters Semley (an aristocrat of the Liuar) in the prologue, he decides the world is not well enough understood, and he mounts an expedition to study it. But disaster strikes — an enemy race is there as well, and they find and destroy Rocannon’s spaceship, marooning him with none of his equipment…

The Kar-Chee Reign… is set far in the future. Humans have colonized other stars, and have forgotten Earth. Earth itself is, as Davidson puts it “flat, empty, weary and bare.” A few humans remain, apparently living a low-tech style of life. Then the insectlike aliens the Kar-Chee come, to mine the Earth for its remaining metals, with the help of huge beasts called Dragons by the humans….

The Rowan family lives in fair comfort on an isolated island that the Kar-Chee have not yet reached. When the aliens finally do come, certain of the locals seem to have forgotten the policy of avoiding them at all costs, and a series of attacks are mounted. These attacks meet with initial success, but then the Kar-Chee are irritated, and reprisals occur. But a group led by one Liam decides to continue to take the fight to the Kar-Chee. 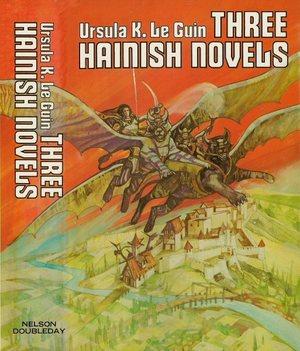 Rocannon’s World/The Kar-Chee Reign was published by Ace Books in 1966. It is 117 + 138 pages, priced at 50 cents. The covers are by Gerald McConnell and Jack Gaughan, respectively.

It has also been reprinted in two omnibus editions, including Three Hanish Novels from the Science Fiction Book Club (1978, see Jack Woolhiser’s cover at right), and Worlds of Exile and Illusion from Orb (1996, see R. S. Winter’s cover below). In both cases it was bundled with two other early novels:

Worlds of Exile and Illusion is still in print (after 20 years — not bad!). If you’re searching for a standalone edition of Rocannon’s World, there hasn’t been one in over 30 years, and there is no digital edition. But used copies aren’t hard to find.

The Kar-Chee Reign has not had as illustrious a career in print, but it did pop up a few times, most notably in an omnibus edition as a more modern “Ace Double” in March 1979 (above right, cover by Olivia), bundled with its loose sequel Rogue Dragon. Both novels were also reprinted in an omnibus edition in April 2000 from Wildside Press. For those looking for a digital edition, Prologue Books released one in August 2012. 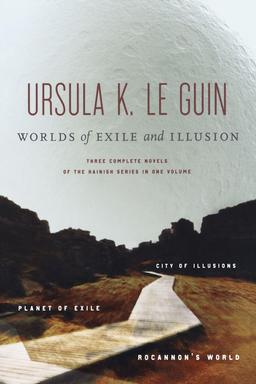 The Plot Against Earth/Recruit for Andromeda by Calvin M. Knox and Milton Lesser
Warlord of Kor/The Star Wasps by Terry Carr and Robert Moore Williams
The Sun Saboteurs/The Light of Lilith by Damon Knight and G. McDonald Wallis
Wandl the Invader/I Speak For Earth by Ray Cummings and Keith Woodcott (John Brunner)
The Sioux Spaceman/ And Then the Town Took Off by Andre Norton and Richard Wilson
Secret of the Lost Race/ One Against Herculum by Andre Norton and Jerry Sohl
Clockwork’s Pirates/Ghost Breaker by Ron Goulart
ATTA/ The Brain-Stealers by Francis Rufus Bellamy and Murray Leinster
The Ship from Atlantis/ The Stolen Sun by H. Warner Munn and Emil Petaja
Vulcan’s Hammer / The Skynappers by Philip K. Dick and John Brunner
The Ship That Sailed the Time Stream by G.C. Edmondson
Bow Down to Nul / The Dark Destroyers by Brian W. Aldiss and Manly Wade Wellman
Gateway to Elsewhere / The Weapon Shops of Isher by Murray Leinster and A. E. van Vogt
The Cosmic Puppets / Sargasso of Space by Philip K. Dick and Andre Norton
The Beast Master / Star Hunter by Andre Norton
Big Planet by Jack Vance
City Under the Sea by Kenneth Bulmer
The Forgotten Planet (Planets of Adventure) by Murray Leinster
Six Worlds Yonder / The Space Willies by Eric Frank Russell
Sentinels of Space / The Ultimate Invader by Eric Frank Russell and Donald Wollheim
Ring Around the Sun/ Cosmic Manhunt by Clifford D. Simak and L. Sprague de Camp
The Trouble With Tycho/ Bring Back Yesterday by Clifford D. Simak and A. Bertram Chandler
The Last Planet (Star Rangers) by Andre Norton
A Touch of Infinity/ The Man With Nine Lives by Harlan Ellison
Kirkus Looks at Donald A. Wollheim and the Ace Double
Tales of Outer Space/ Adventures in the Far Future edited by Donald A. Wollheim
The Pirates of Zan by Murray Leinster

One of the “many other great writers” who got their start in Ace Doubles was Dean R. Koontz, whose first novel, star Quest, was an Ace Double. In fact, supposedly the editor told him his half of the book was shorter than the other half, so they would only pay him $1000 instead of $1250. Later he learned they told the other author the same thing, with someone at Ace apparently pocketing $500 that belonged to writers.

I’ve seen those kinds of cost-cutting techniques at use in publishing before. I sincerely hope it wasn’t a case of an Ace editor pocketing the money. I hope instead it went to funding another book. But who knows?

As a collector of Ace Doubles, I can tell you the Dean Koontz ones are murder to get – pricier than any others, in my experience.

That’s true, Thomas — although the Phil Dick Ace Doubles are no picnic these days, either.

Oooo – then I can retire on my pristine copy of The Man Who Japed?