We’re back to our survey of Ace Doubles, this time with a surprising pair of adventure books by Ron Goulart.

I’m a fan of Ron Goulart, although I only discovered him recently, when I sampled some stories from his excellent collection What’s Become of Screwloose? and Other Inquiries in 2012. So I was pleased to spot his 1971 Ace Double, Clockwork’s Pirates and Ghost Breaker, in a collection of 23 old paperback I found on eBay. Twenty-two bucks later, the collection was all mine.

Goulart has a well-deserved reputation for satire and comedy, but with Screwloose I was happy to discover he has a talent for mystery and adventure as well. Mystery and adventure are very much what’s advertised in Clockwork’s Pirates and Ghost Breaker. The former is a novel of robot pirates, the scourge of the spaceways, who steal the planetary governor’s daughter and sell her on the slave markets, and the latter is a collection of short stories featuring a modern supernatural detective, in the mold of John Silence and Carnacki the Ghost Finder.

Clockwork’s Pirates is the third novel in Goulart’s Barnum System space opera series, which also includes Shaggy Planet (1973), Dr. Scofflaw (1979), and the Star Hawks novels. Its gonzo premise is matched by its breezy narrative style. Here are the opening paragraphs:

They came howling over the rail out of the darkness, reeking steam, with machine oil splashing from them. They were all a shade larger than the biggest of men and they swung cutlasses and fired pistols. The bright metal of their weapons caught the flickering glow of their eyes. There were two dozen of them, all wearing bright clothes, sharply crimson sashes and bright yellow head rags. They were rich with gold earings and sooty eye patches and crinkly black beards.

“Pirates,” said the only female passenger on the small square-sailed merchant ship.

John Wesley Sand, who had been standing with the fair young girl near the cabin, said “Just who I’m looking for.” 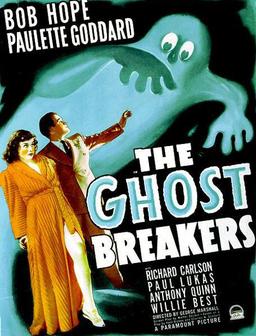 As intriguing as that is, I admit I’m more interested in Ghost Breaker. “Ghost Breaker” is rather an unusual term these days, but in the 1960s it was common enough, mostly due to Bob Hope’s popular 1940 screwball comedy The Ghost Breakers. (The modern equivalent is doubtless “Ghostbuster”).

Here’s the inside cover copy of Ghost Breaker:

From the files of Max Kearny

CASE:
“My late father was a band leader. He and his entire dance pavilion are playing a nightly engagement on my front lawn and the neighbors are beginning to complain…”

CASE:
“I’ve told my husband there is something wrong with the house, what with sea gulls in the kitchen sink and black furry things in the bedroom. But he’s only interested in the gnome under the living room.”

CASE:
“The average blue-eyed blonde-haired little girl passes 462 lbs. of smut on her way to Sunday school. We know. We weighed it.”

CASE:
“I turn into a middle-sized gray elephant on national holidays.”

CASE:
“Mrs. Levin has summoned up a three-man ghost patrol to protect her son the doctor.”

That should give you a fair idea of Goulart’s off-kilter imagination. Flipping open the book, I found this brief intro to the stories on the first page:

People with serious supernatural problems probably will consult John Silence or Carnacki. Max Kearny usually gets the lighter, sometimes screwball, occult cases to work on. Problems like: a tract house with a gnome under it, a young man who turns into an elephant on national holidays, a television set haunted by a ghostly guitar-playing uncle, etc.

Living in San Francisco, and an advertising man by profession, Max has been an amateur ghost breaker for nearly a decade now. He made his debut in the Magazine of Fantasy & Science Fiction in February of 1961 and has appeared there regularly ever since. He got married in September of 1965 (a little over a year after I did), but this hasn’t slowed down his occult investigating any.

The nine stories in this collection cover Max Kearny’s career from 1962 through 1969. They all have California as a setting, usually San Francisco and environs, and once or twice the Los Angeles area.

Clockwork’s Pirates/Ghost Breaker was published by Ace Books in 1971. It is 111+142 pages, priced at 75¢. The art for both covers was by Karel Thole. Both books have been out of print for 44 years; there is no digital edition.

Any man who ghostwrites for William Shatner knows that the universe is one big joke.

Although Ron Goulart’s name is pretty familiar, I can only recall one book of his – ‘The Tin Angel’, about a latter-day, cybernetic Rin Tin Tin character investigating something or other in a futuristic Hollywood. For some reason the fact that the dog had a plastic nose freaked me out. Checking out Goulart’s bibliography suggests that the book was a variation on his ‘Groucho’ books, in which Groucho investigates shenanigans in Thirties Hollywood – ie, both feature a wise-cracking mc and his accomplice.

Fans of hardboiled could do worse than check out his ‘The Dime Detectives,’ which is a nice history of the genre.

I’ll mention my Ace Double Review of this book, from several years ago: http://www.sff.net/people/richard.horton/aced80.htm

> Any man who ghostwrites for William Shatner knows that the universe is one big joke.

Thomas — did you ever see any of the TV versions of the Goulart/Shatner TEK WARS novels? They were broadcast as part of the late-Friday-night ACTION PACK in the mid-90s. I thought they were rather fun. Shatner had a minor role as a villain, if I remember.

I admit I never read the novels though…

> Checking out Goulart’s bibliography suggests that the book was a variation on his ‘Groucho’ books, in which Groucho
> investigates shenanigans in Thirties Hollywood – ie, both feature a wise-cracking mc and his accomplice.

OK, I admit I’m not familiar with Goulart’s Groucho books… but damn, that sounds like a premise worth investigating. They may be worth another VINTAGE TREASURES post if I can track down one or two.

Bob! I should have known you’d have your finger on the pulse of Goulart. Can I entice you to do a review for us sometime?

> Fans of hardboiled could do worse than check out his ‘The Dime Detectives,’ which is a nice history of the genre.

Goulart has written some terrific non-fiction… his books on comics, especially The Encyclopedia of American Comics (1991) and Comic Book Culture: An Illustrated History (1980), are a lot of fun.

> I’ll mention my Ace Double Review of this book, from several years ago:

A fine review. Thanks for the link, Rich!

John: As soon as I read about a series of mystery novels with Groucho Marx as the detective, my mind was on the same wavelength: I’ve got to track those down!

I love that Ace Double cover to Ghost Breakers; I wouldn’t mind dipping into that book either. The Case File intros are a hoot!

> As soon as I read about a series of mystery novels with Groucho Marx as the
> detective, my mind was on the same wavelength: I’ve got to track those down!

I know, right? Why haven’t I heard of these before?

> I love that Ace Double cover to Ghost Breakers; I wouldn’t mind dipping into that book either.

I liked both covers, but I admit GHOST BREAKERS is the one my eye lingered on.

> The Case File intros are a hoot!

They certainly convey the tongue-in-cheek nature of most the stories. Goulart has a flair for this kind of light humor, and his descriptions can be marvelous. Read some of the excerpts from “What’s Became of Screwloose” to see what I mean.

“What’s Become of Screwloose” was the first Goulart I ever read. For about a ten-year stretch, it seemed like every third book DAW published was a Goulart.

[…] Double by a fine review on Black Gate and was inspired to find my copy and reread it. Just click here to check it […]