As you may have noticed if you’ve been following my Vintage Treasures posts since I returned from the Windy City Pulp & Paper show, I’ve been time-traveling back to the early 1980s in my big green chair, courtesy of some newly acquired vintage magazines, paperbacks, and fanzines.

Al those ads, editorials, and reviews have rekindled an interest in the forgotten books of the era. I find myself browsing my library, shopping for titles from the early 80s. Last night, I picked up a handsome Avon paperback from January 1980, the very threshold of the decade, and settled back into my chair to try it out.

Of course, when I finally bothered to look at the copyright, I discovered that City Under the Sea wasn’t written in the 80s. It first appeared three decades earlier in 1957 as an Ace Double, back-to-back with Poul Anderson’s Star Ways, and it was reprinted multiple times in the intervening years.

Above is a sample of some of the various editions over the years (click for bigger versions). If I owned these editions, I wouldn’t be the clueless reader you see before you. This is why a huge paperback collection is so essential. 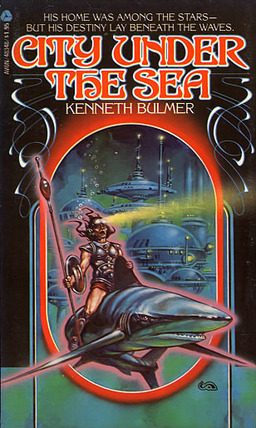 Kenneth Bulmer was an astonishingly prolific writer. He published over 40 SF and fantasy novels in the two decades between 1952 and 1972, and an additional eight in the Keys to the Dimensions series.

Under the name Alan Burt Akers, he also wrote over 50 Dray Prescot novels and, under various names, dozens of novels in the Fox and Hook series.

Seriously, that’s a hell of a lot of books.

Here’s the back cover text of the 1980 Avon paperback edition of City Under the Sea. The cover is at right.

Space Commander Jeremy Dodge is on furlough on his way to the moon when he is summoned back to earth for a mysterious conference at the Blue Deep Hotel. Suddenly he finds himself in a treacherous underwater trap with beautiful, blonde Elise Tarrant as bait — caught in the snare of a vast sea exploitation scheme run by ruthless entrepreneurs in the aquiculture racket.

Longing for his home out among the stars, yet unable to forget the woman who has lured him to a life of underwater serfdom, Jeremy determines to find her and escape. Then one day he wakes from a drugged sleep to find fish swimming in and out of his prison cell and his own breathing apparatus removed. He has been given the operation that will banish him forever from the word he knows. He can no longer breathe air. He is a manfish.

While City Under the Sea enjoyed multiple reprintings, the 1980 Avon edition was its last.  It has been out of print for roughly the past 34 years. It was finally offered again — in digital format — by Gateway/Orion in 2011.

City Under the Sea was printed by Avon in January 1980. It is 173 pages, originally priced at $1.95. The cover is by Clyde Caldwell, who later became strongly associated with TSR and D&D. Personally, I think Caldwell nailed the cover — it’s a striking piece of work.

Love the cover art on the Avon edition. I may have to hunt this one down. I recently read the first of the Dray Prescot books and enjoyed it.

Your Windy City Pulp and Paper posts finally inspired me to go a pulp convention here in my own city: Pulpfest 2014 (in conjunction with Farmercon IX–a convention in honor of sci-fi author PJF).

I just got back this evening and man did I spend some money on some books. I was able to track down about twenty titles from the BAF line that I didn’t have AND a couple of more Del Rey Best ofs that I also hadn’t gotten yet.

I’ve known about this con for a few years but I always thought that it was only focused upon pulp magazines from the 20s-50s; so I never went. Your posts about Windy City made me suspicious that other SF&F goodies might be available at Pulpfest as well.

Sure enough, though pulp mags are the main thing, there was plenty more to enjoy. My bank account now suffers but my library is now the richer.

> Love the cover art on the Avon edition.

Yeah — isn’t it eyecatching? A much more intriguing rendition of an underwater civilization than the previous attempts, I think.

> I recently read the first of the Dray Prescot books and enjoyed it.

Another one of those series that I’m a little reluctant to start… there’s 53 of them! Only the first 37 were published by DAW… the next eight were only published in German translation! And after #45, it gets REALLY tough to track them down.

> Your Windy City Pulp and Paper posts finally inspired me to go a pulp convention here in my own city: Pulpfest 2014

That’s fantastic! I’m so glad you supported a local con, and that you found so many fabulous treasures.

It’s so easy to take these conventions for granted… but far too many of my favorite cons have died due to lack of support over the years. I’m really glad to hear my WINDY CITY articles inspired you to seek one out.