For the past 17 months I’ve been surveying Ace Doubles here at Black Gate; this is the eighteenth in the series. Donald Wollheim, the founding editor of Ace Books and the man who created the Ace Double, had excellent taste, and he published countless successful titles that would remain in print for decades — and help launch the careers of major stars, including Philip K. Dick, Robert Silverberg, Andre Norton, and a great many others. I’ve really enjoyed tracking down later printings and presenting them in these articles as testament to just how enduring the Ace Double selections were — including books like Jack Vance’s Big Planet and Andre Norton’s The Beast Master, both of which have been reprinted more than a dozen times over the decades, with an eye-opening gallery of cover art.

And then we have ATTA and The Brain-Stealers, by Francis Rufus Bellamy and Murray Leinster, published as an Ace Double in 1954.

It’s obvious not even Don Wollheim could pick a pair of winners every time. When I started researching both books, I was fairly certain neither had ever seen another printing. That turned out to be incorrect (but not by much). At least this installment will be short. 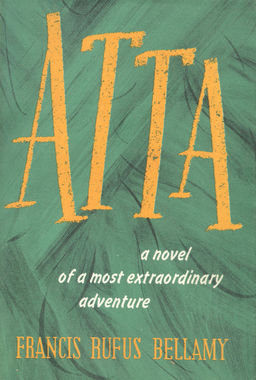 With ATTA, it’s clear Wollheim was trying something a little different, going outside the genre to bring in a literary figure. Francis Rufus Bellamy wasn’t just a literary writer — he was a symbol of the Manhattan literary elite. He was executive editor of The New Yorker in 1933, and became the editor of Scribner’s Commentator in 1939. He eventually became president of University Publishers Inc. in 1958.

ATTA was his sole fantasy novel — his other publications had titles like We Hold These Truths: An Anthology of the Faith and Courage of our Forefathers (1942) and The Private Life of George Washington (1951). ATTA was originally published in a hardcover edition in 1953 by A. A. Wyn.

Perhaps Wollhiem thought he could win a little grudging respect for his fledgling publishing house with a distinguished literary figure in his stable. Maybe he just really enjoyed the book. More likely, however, it had something to do with A. A. Wyn, the hardcover publisher. Wyn is better know these days as the editor who removed the swastika logo from Harold Hersey’s pulp magazines when he took charge, and replaced it with an Ace symbol… and as the publisher of Ace Books.

Whatever the case, Bellamy’s literary connections led at least a few critics to take it easy on him — and one or two to even gush. Wollhiem knew a good thing when he saw it, and appropriated some of that good press for his marketing copy. Here’s the blurb from the inside cover of the Ace Double edition of ATTA:

“Carries the reader quite irresistibly along…” – Joseph Wood Krutch

This astonishing novel of a man who found himself thrust into a nightmarish world of giant insects and incredible adventures won the enthusiastic applause of reviewers throughout the country. For example, Margaret Parton in the New York Herald-Tribune wrote:

“Of the ninety-some books which this reviewers has read for these columns since last January, ATTA is the only one which we are quite certain is destined to become an authentic classic… one of permanent excitement, permanent value.

It is, first of all, a spine-chilling narrative, filled with battle and suspense. It is a work of extraordinary imaginative power, extending our own awareness of human and of insect life…. Every page sparks off a new idea… The story moves to a heart-pounding climax.”

Read the next page for more reader-applause, and then go ahead and read this unforgettable fantasy novel for yourself.

Bellamy’s literary connections did him absolutely no good in the SF community, however. In his famous critical book In Search of Wonder, Damon Knight wrote:

Aside from the author’s archaic narrative style and his relentless disregard of natural history, the principal irritant in this story is the hero’s absolutely impenetrable stupidity… This book could only have been written by a man who thought his idea was brand new. If he had read a little science fiction, he might have been disabused of this and several other misconceptions; but doubtless he took the word of some respected critic that no worthwhile fantasy has been published since 1719.

The reviews weren’t any kinder in the magazines. Here’s P. Schuyler Miller in his The Reference Library column for the February 1955 issue of Astounding Science Fiction:

As a satire on human society, it’s rather fumbling. And if it’s just a story… it could be more skilfully told.

Not too surprisingly, ATTA did not become “an authentic classic” as Ms. Margaret Parton predicted. It saw a single reprint from Pocket Books in March 1974 (below left, cover artist unknown), and then vanished completely. It has now been out of print for 40 years.

That’s probably understandable for an author with the middle name “Rufus.” But what about Murray Leinster, the acknowledged “Dean of Science Fiction”? Leinster published 38 science fiction novels and over a dozen collections in his lifetime, and had his peak of popularity in the late 60s, a decade after this book appeared. Surely The Brain-Stealers had a long life, appearing in multiple editions from Ace and Leinster’s other publishers?

No. It did not. I haven’t read it, and can only hazard a guess as to why this book quietly vanished while Leinster’s The Pirates of Zan and The Forgotten Planet, both written in the same decade, had long lives. But maybe it had something to do with the goofy monster-movie plot.

He Alone Defied the Cosmic Vampires!

When the outlawed scientist Jim Hunt leaped from the prison plane, he had no suspicion that he was not the only one falling silently through the midnight sky. But other, stranger exiles were landing at that very moment in the same backwoods region… exiles from the unknown depths of outer space, exiles seeking human food.

When Jim started to make his way back home, he discovered the full horror of that night’s events. For the people he met had become mere flesh-and-blood puppets, mindless creatures doing the bidding of the unseen invaders. And though every man’s hand was against him, both free and enslaved, Jim knew that he alone was humanity’s only hope for survival.

Murray Leinster’s BRAIN-STEALERS is an unusually gripping science-fiction novel of thought transference, invaders from space, and vampirism on a world-wide scale!

The Brain-Stealers was re-printed once, in 1976, as part of Fred Pohl’s Science Fiction From the Great Years line, with a very early cover by Stephen Hickman (below right). Except for a print-on-demand edition from Wildside Press, it’s now been out of print for 39 years.