G.C. Edmondson was not a prolific fantasy author. He wrote barely half a dozen novels between 1965 and 1981. But at least one, The Ship That Sailed the Time Stream, became an acknowledged classic, kept in print by Ace Books for nearly two decades after it first appeared in 1965.

Edmondson wrote Westerns under at least three pseudonyms. The Ship That Sailed the Time Stream was his first fantasy novel; it first appeared as part of an Ace Double (cover by Jack Gaughan, above left), paired with Stranger Than You Think, a collection of Edmondson’s short stories.

The book, the tale of a military research ship cast back in time to the Bronze Age while testing experimental submarine detection gear, was an immediate critical success. It was nominated for the Nebula Award (it lost to Frank Herbert’s Dune), and Jerry Pournelle, co-author of The Mote in God’s Eye and Lucifer’s Hammer, called it “One of the best time travel novels I have ever read.”

It was reprinted with a new cover by Kelly Freas (above middle) in 1970, and again in 1978 (above right, art by Stephen Hickman.) Here’s the back cover blurb for the 1978 version:

The special research vessel Alice was the oddest ship that ever flew the ensign of the United States Navy; small, wooden-hulled and sail-powered, she would have been less out of place in the Navy of a hundred years ago — if it weren’t for the electrician’s nightmare of a christmas tree hanging from her main boom.

The purpose of the “christmas tree” was to detect enemy submarines. It wasn’t very good at that, but when lightning struck it proved itself highly efficient at… something else. For when the smoke cleared, there off the port bow was a long-ship. Full of Vikings. Throwing things.

The Alice had become… The Ship That Sailed The Time Stream. 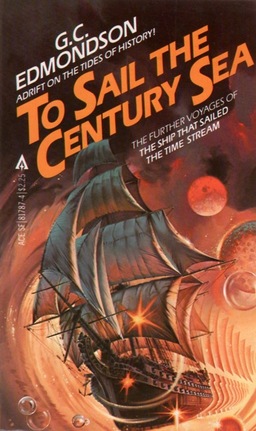 The Ship That Sailed the Time Stream had one sequel, To Sail the Century Sea, also published by Ace in 1981 (right, cover by Paul Alexander.) Unlike the first volume, this one had no later editions; it is currently out of print and can be a little tricky to find.

Ace brought The Ship That Sailed the Time Stream back into print the same year To Sail the Century Sea was released, but that was to be its swan song. It was never reprinted again; both novels have now been out of print for 34 years.

To Sail the Century Sea was G.C. Edmondson’s last solo novel. But in 1984 he returned to bookstore shelves with The Takeover, the first of four novels he would co-author with C. M. Kotlan. The other three were The Cunningham Equations (1986), The Black Magician (1986), and Maximum Effort (1987).

The Ship That Sailed the Time Stream was originally published in 1965. My copy is the 1981 Ace edition. It is 274 pages in paperback, with a cover price of $2.25. The cover is by Stephen Hickman.

It is long out of print, and there is no digital edition.

The Ace Double edition of this has been in my to-read pile for literally three years. Maybe this is an omen…

If you read it, I’d love to get a full review.

I’m also very curious what the collection on the flip side is like….

I’ll see if I can’t take a crack at it. The “Stranger than You Think” stories are, I understand, tall tales, more or less.