And now we come to one of my favorite Ace Doubles: Murray Leinster’s Arabian Nights fantasy Gateway to Elsewhere, paired with the classic science fiction novel The Weapon Shops of Isher by A. E. van Vogt.

Of the two, Gateway to Elsewhere is significantly lesser known. It was Leinster’s first fantasy novel, although he’d previously published two SF novels, The Murder of the U.S.A. (as Will F. Jenkins, in 1946) and The Black Galaxy (in Startling, March 1949). Gateway to Elsewhere originally appeared in a two-part serial in the seventh issue of the small circulation digest Fantasy Book in 1950/51 under the title Journey to Barkut. The entire novel was reprinted in the January 1952 issue of Startling Stories, still under the title Journey to Barkut, with a handsome cover by Earle Bergey (see below).

Two years later, it appeared as half of Ace Double D-53, with the new title Gateway to Elsewhere, and a splendid cover by Harry Barton.

Here’s the blurb on the inside front cover:

“There are other worlds… and it is possible to travel from one to another. In fact, we constantly visit the frontier cities without ever knowing it!”

Tony Gregg was just an ordinary everyday American until the day he came into possession of an old Barkut coin. He knew it was more than just a collector’s curio because there was no such place on any map of Earth, past or present. He learned then that it could be used as a key — a key to a GATEWAY TO ELSEWHERE.

That was the beginning of one of the most fabulous and fantastic adventures that ever befell a young man looking for excitement. For Gregg plunged forthwith into a fourth-dimensional world of the Arabian Nights, where the djinns of Aladdin’s Lamp were rampaging realities, and a lovely princess was waiting to be rescued!

Murray Leinster, dean of science-fiction writers, is at his best in this ACE Original.

I was a little surprised to discover that, by 1954, Leinster was already being called “the dean of science fiction writers.” It was a title he was to retain until his death in 1975.

I was also surprised to see Gateway to Elsewhere called an “ACE Original.” That’s a bit of publisher hyperbole, as the novel had already been published twice by the time it appeared in paperback.

Gateway to Elsewhere was never one of Leinster’s more popular novels. After the 1954 Ace Double edition, it remained out of print for over five decades, until it was reprinted in A Logic Named Joe in 2006 (above right, cover by Kurt Miller), one of three major omnibus collections published by Baen (the others being Planets of Adventure, from 2003, and Med Ship).

A.E. van Vogt’s The Weapon Shops of Isher fared significantly better. It is still considered an SF classic, and it has rarely been out of print since its first hardcover appearance in 1951.

The Weapon Shops of Isher is a fixup novel collecting three stories:

The Weapon Shops of Isher was originally published in hardcover by Greenberg in 1951 and reprinted in hardcover by Weidenfeld & Nicolson as part of their Science Fiction Shelf series (above right, cover artist unknown.)

The Ace Double was the first paperback edition; it appeared in April 1954 (cover uncredited). Here’s the inside cover blurb:

By the year 4784, The Empire of Isher ruled the universe and an impetuous willful girl ruled the empire. Into this epoch, the most scientifically powerful period humanity ever knew, a time-staggering bombshell was tossed. It came in the form of a man from today, a victim of a conflict which was as old as that empire and which now threatened to be the end of both Isher and its worlds.

In this powerful and brilliant novel, A. E. van Vogt introduces such amazing characters as Cayle Clark who could never lose at cards, Robert Hedrock who knew everyone’s secrets, Peter Cadron who sold illegal super-weapons in public, and Innelda Isher who never had to take no for an answer.

Packed with super-science, an astonishing future concept, and a tight suspense plot, THE WEAPON SHOPS OF ISHER is truly a science-fiction classic.

The Weapon Shops of Isher remained in print for most of the 20th Century. It was included in Anthony Boucher’s groundbreaking two-volume anthology A Treasury of Great Science Fiction (above left), published in 1959 and in print for nearly 20 years.

It appeared in a standalone paperback edition from Ace in 1961, with the same cover as the Ace Double edition, and then again in 1969 from New English Library in the UK, with a cover by the great Bruce Pennington (above middle), and a new US edition from Ace the same year (above right, cover by John Schoenherr).

Ace published one last edition in 1974, with a very 70s cover by Bart Forbes (above left). After that, the US rights were snatched up by Pocket Books, who released their first version in 1977, with a cover by Adams (above middle). They reprinted it in 1980, with a new cover by Gerry Daly (above right).

Van Vogt wrote one more book in the same setting: The Weapon Makers, originally serialized in Astounding Science Fiction in 1943 and published as a standalone paperback by Ace in 1966. It was in print through most of the 70s and 80s from Ace, including a 1970 printing from Grosset & Dunlap, with a Paul Lehr cover (below left), and a 1979 Pocket edition (below middle, cover by Jerome Podwil).

Both books were published in a handsome omnibus by Orb in July 2000, under the title The Empire of Isher (below right, cover by Vincent Di Fate).

And our most recent posts about van Vogt were:

The Worlds of A.E. Van Vogt
The Voyage of the Space Beagle
An Ode to Episodes, or: Can Fix-Ups Be Fixed?

If you’re interested in the Ace Double version copies in very good condition start at about $6. Amazon lists used copies starting at about $5, and eBay has multiple copies currently up for bid starting at $5.

Delighted to see that old Ace Double. It was the first I ever had, as I found it on my father’s basement bookshelf. I read Gateway to Elsewhere with a combination of wonder at the fantastic elements and frustration that there wasn’t more hell-for-leather action. Hey, I was in fourth grade.

But for me the coolest thing about this post is that last cover image—the Empire of Isher from Orb in 2000, with the Di Fate cover.
That’s because the man in the painting is clearly Steve Holland, the Uncrowned King of paperback cover models from the 60’s through the 70’s. I thought artists had stopped using his image long before 2000. Perhaps it’s an older image. Perhaps Mr. Di Fate was offering a tribute to Holland.
Holland rates a tribute. The guy was the perfect image of manly adventure for years.

He was Doc Savage…
http://venturegalleries.com/wp-content/uploads/2014/07/Doc-Savage-model-Steve-Holland-James-Bama-artwork-3a31.png

He was The Avenger…
http://2.bp.blogspot.com/_2Tg4dgE9PVg/SwQuRkbpE-I/AAAAAAAAAzU/dfKfiy8fmEY/s1600/avenger.jpg

He was The Executioner…
http://ecx.images-amazon.com/images/I/81-ujpPfrXL.jpg

He went head-to-head with noir crime… 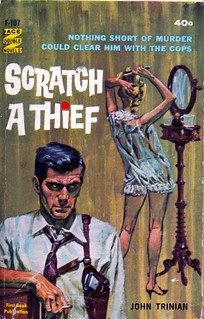 He showed up in roughly 3 million illustrations and covers for Men’s Adventure magazines…
http://i.kinja-img.com/gawker-media/image/upload/s–QSFfX8kv–/c_fit,fl_progressive,q_80,w_636/19f76lvi65244jpg.jpg

And if that wasn’t enough, he played Flash Gordon on TV…
http://1.bp.blogspot.com/_0WGbbAaNY6w/TOj1btuIyOI/AAAAAAAAJMs/3Zxj64Lgu3A/s400/1954steveholland.jpg

In short, if you watch for him on the covers of paperbacks and magazines issued between the middle fifties and the late 70’s, you will never stop seeing him.
Cool to learn he still rated cover treatment in 2000. Thanks, John.

Wow! I’ve never heard of Steve Holland, but it’s undeniable that the guy was everywhere on paperback covers. Thanks for the panorama of links!

And you’re right, Holland clearly deserves a tribute. I’m surprised there haven’t been a few already!

Interesting article, I will definitly keep an eye out for the ace double, as I happen to have a copy of The Weapon Makers which i have been putting off until i can lay hands on the Weapon Shops of Isher. And of course the Leinster will just be icing on the cake.

I am reading D277 – The City n the Moon at the moment. Bonus is othe rside is an anthology which inclused a Leinster short story.