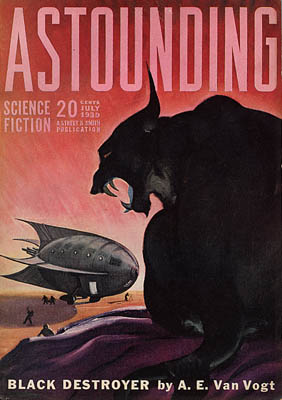 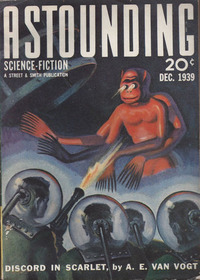 Episodic novels (or fix ups) have a bad reputation these days, and I don’t think that’s entirely undeserved. For instance, I find the individual “weapon shop” stories of A.E. Van Vogt sort of intriguing, the way Van Vogt can be intriguing before he lets you know what he’s really driving at (usually something like Tyrants Are Nice People, Really). But The Weapon Shops of Isher, based on the same stories, is a chunk of dreck by comparison, and its sequel is even worse.

In a somewhat different case, the Conan stories were adapted and reordered, long after Robert E. Howard’s death, as a series of episodic novels covering a long arc of the hero’s career. REH’s tales were pasted together with inferior pastiches by various hands and speculations about what happened in the gaps of Conan’s reported career. This was probably a good thing at the time: these Lancer editions (later reprinted by Ace) put REH’s work at last in the hands of a wider audience. But, as has often been observed, it’s impossible to read these volumes without a sense that REH’s imitators are painfully inferior to the original. REH’s stories have since been republished, with restored texts and in their original order of publication, and it’s a rare REH fan that doesn’t think this is a good thing.

Similarly, Michael Moorcock refashioned his own Elric stories into booklength narratives, and these were the versions in which most readers encountered the White Wolf. But I, frankly, wasn’t crazy about the effect. The earlier Elric stories had a different flavor than the later stories, and I found the passage from one to the other and back somewhat jarring. The Elric stories are receiving the full Conan treatment these days, a new edition collecting the stories in their original order of publication, and are being greeted by loud cheers, at least from me.

It’s easy to see why an episodic novel might not work. The narrative rhythms of an effective short story are wholly different from those of a novel. Suppose we have a series about the Star Smasher. In the first story, the Star Smasher confronts the ultimate challenge of his career when he faces the searing radium-stars of the Nebular Ninja. In the second story, the Star Smasher confronts the ultimate challenge of his career in the savage star-claws of the Galactic Leopard. In the third story, to introduce some sadly needed variety, we send the Star Smasher on vacation, where he discovers the nefarious plots of the Cruel Concierge of Cassiopeia K. In the fourth story we reveal that the Star Smasher is the secret identity of Glurk Franduel, a minor character who has appeared in the series before. The fifth story is a plotless postmodern meditation on suffering and secrecy where Glurk Franduel and his Star Smasher persona argue at length and with many gratuitious high-cultural allusions in an obvious and somewhat futile attempt to snag a literary award. There is no sixth story because the magazine folded or the editor regained his sanity.

In novelizing the series, we have certain problems. For one thing, there are two ultimate challenges, and we’ll want to fix that, or people will think we don’t know what “ultimate” means. We also have some sort of internal crisis of the main character, and we have learned (i.e. invented) various things in the later stories which would have been relevant in the earlier stories. We could weave all these things into a new narrative–begin with the Nebular Ninja, put the vacation stuff and the existential crisis in the middle, end with the Galactic Leopard. But to do that we will have to change the original stories significantly, possibly alienating some of our core audience. (Call this the Van Vogt method.) Or we could just pretend that the individual stories are chapters and paste on some “interludes” to make them stick together. The book won’t really be a novel, just a collection of stories passing as a novel because people don’t buy collections of stories. (Henry Kuttner’s Mutant is a somewhat elderly example; Bujold’s Borders of Infinity or Stross’ Accelerando are more recent ones.)

Or: we could just refrain. That’s at least a viable approach nowadays. Matt Hughes’ short stories of Henghis Hapthorn appeared serially in F&SF, but when they were published in book form it was as a collection. We could just call it Star Smasher Stories! and get started on the booklength sequel, The Star Smasher vs. the Space Beagle!. If the stories really chart the zig-zag pattern I laid out above, that might be the best solution.

But episodic novels work sometimes. Cabell’s The Silver Stallion, Fritz Leiber’s Swords and Deviltry and The Swords of Lankhmar, and Jack Vance’s Cugel books are all successful episodic novels, where the existence of an over-arching serial plot heightens the impact of the individual episodes. The effect is different than a volume of good stories or a good novel, but (when successful) is equally pleasing.

Also, this is a very traditional form in sf/f generally and sword-and-sorcery in particular. For some, that may not matter at all. The past is dead. The future is now. The reason to jump off the cliff is that no one has done it yet. But, personally, when it comes to cliff-jumping, I am not that innovative. I like to look down and see a deep, soft carpet of my predeceased predecessors before I leap.

I think one of the biggest reasons to write an episodic sword-and-sorcery novel is the nature of the genre itself. Most would agree that S&S stories tend to have a narrower scope than stories of high fantasy. An episodic novel allows the storyteller the opportunity to spin a novel-length story without introducing Evil Dark Lords of Evil, Chosen Ones Who Will Lead Us to the Path of the One True Kingdom Wisdom, and the other threadbare archetypes that like to infest the wide open spaces of a narrative with 100K words (or more). The individual episodes keep the issues personal, where S&S likes them, while their cumulative effect (if the stories work together, rather than against each other) can add up to something like-yet-unlike a novel’s impact.

Not sure picking on Van Vogt examples is that convincing. Don’t agree either about the Weapon Shops stuff.

How about this list, then? Other than those you have mentioned, without adding more Moorcock, Howard, Leiber or Vance.

Well, we don’t have to agree about the Van Vogt.

I wouldn’t say all the evidence on your list points in the same direction, though. Some of these books aren’t presenting themselves as novels (e.g. Dreadful Skin, Agent of the Terran Empire). Some are really just collections of magazine series in chronological order, no matter what the cover copy says (e.g. Jirel of Joiry, Foundation). Some are expansions from a shorter piece (like Dreamsnake). And some have been carefully written, rewritten and rerewritten into a coherent larger narrative (e.g. Imaro).

To be clear: I’m not against episodic novels; I’m in the finishing stages of writing one. I’m trying to sort out what works and what doesn’t. In general, what I think works is adapting the source material as little as possible.

Having said that much, I’ll go further out on a limb here, and say that “Baby Is Three” is a better story than More Than Human is a novel.

Sure, just some varied examples, all the stuff you mentioned doesn’t point in the same direction, either.

More Than Human I’d call a collection, myself, despite whatever the marketing suggests, as you say.

Baby Is Three is the best story, sure, but as a whole, it comes out better than that, for me.

I think episodic novels are best when they are planned out that way from the start. e.g.; David Drake’s Old Nathan.

When they are cobbled together stories with changes to the originals to string them together, they don’t work so well. And the changes upset the purists, as you’ve noted.

There are a few exceptions, of course. Bradbury’s Martian Chronicles comes to mind.

I’ve only read the one story by S.C. Bryce in RotS, but there seems to be an episodic feel to the story of Dermanassian.

It seems he’s on a larger journey than the short story suggests and that it continues in other tales. It would fit nicely into an episodic book if conscious care is taken from the onset.

I’m not sure Jirel of Joiry was ever positioned as a fix-up. It’s a collection of stories.

My experience with fix-ups has been almost universally negative. Eando Binder’s Adam Link stories are great fun when read in their original form, but he changed the tense and dropped a few of them when he collected the stories into a 1960s paperback. Bad.

On the other hand, “Robert Cham Gilman” (Alfred Coppel) actually improved the old Planet Stories tale “The Rebel of Valkyr” when he turned it into “The Rebel of Rhada.”

Hey Dave: I do like the Dermanassian stories. I have a powerful bias against elven characters, but the storytelling trumped my prejudice.

Hey Paul: I’m with you. I also don’t like it when writers (usually toward the end of their lives) start making all their novels into one series, either. Also, my feet kind of hurt right now (since I seem to be whining about everything and its cousin).

Hey Erik: One of the reasons the term “fix-up” bothers me is that people tend to use it inconsistently–for collections that dare not speak their name, or actual in-your-face collections, or a novelized series, or a booklength fiction, part of which was published as an independent story. So someone telling me “This book is a fix-up” doesn’t tell me all that much until they tell me more.

I really like the Rebel of Valkyr. If there’s a better expansion, it should be Planet Storied. 🙂

[…] While the book is fondly remembered by most fans from the era, not everyone considered Van Vogt’s fix-up formula successful. Here’s our own James Enge, from a 2009 Black Gate blog post: […]