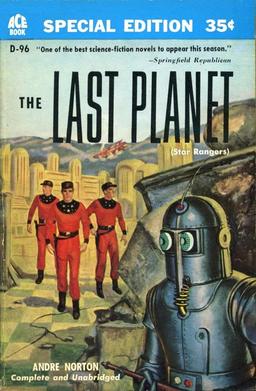 Andre Norton’s The Last Planet may have been the first Ace Double I ever saw.

Memory is a tricky thing, so I can’t really be sure. It may have been Daybreak — 2250, which sat enticingly in the spinner racks of the St. Francis Junior High School library in Halifax, Nova Scotia. But The Last Planet was almost certainly the first Ace Double I laid eyes on which I was aware was an Ace Double, with a sister book on the flip side and everything (in this case, Alan E. Nourse’s futuristic thriller A Man Obsessed.)

By then, I had begun to build my own collection of SF paperbacks and this fascinating relic of early SF adventure helped pull me towards the entire Ace Double line, like a shipwrecked sailor drawn towards a desert island. A big, lush desert island with a gorgeous library.

It’s Harry Barton’s classic cover for the 1955 paperback that really did it for me. I’ve never read The Last Planet — it took me years just to track down a copy — but nonetheless it has loomed large in my imagination for decades. Three stalwart space explorers, walking through the ruins of an alien city as their crashed spacecraft cools in the foothills behind them, about to stumble upon a metal robot, hiding in the rubble and clutching a rudimentary weapon.

How could it not? For me, at least, it’s one of the signature works of 20th Century SF artwork.

In the years that I searched for a copy, I imagined the story of those three explorers. Would they shoot the robot? Was it friendly? Could be friendly, with those big google-eyes and curious gaze. Those red-shirted explorers looked awfully trigger happy though, with their steely gazes and twitchy hands on their futuristic sidearms. Lords knows, you can’t blame a redshirt for being trigger-happy on an away mission.

The Last Planet was one of the holy grails of early paperback collecting for me. Of course, once I managed to lay my trembling hands on a battered copy, it turned out to be fairly anti-climatic. In teeny white letters under the title was the novel’s original title: Star Rangers. 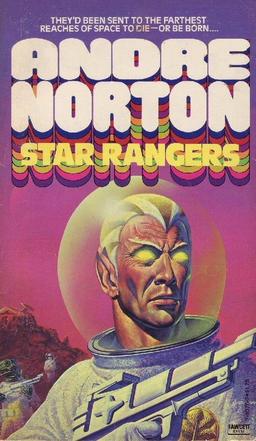 Oh, come on. Seriously? I already had a copy of Star Rangers. You mean I could have read this book any time I wanted? Aaargh.

Now, Ken Barr’s cover for the 1980 Fawcett paperback edition of Star Rangers is perfectly suitable — colorful and dynamic; above average for an 80’s paperback, really. But it didn’t have that vintage magic. It didn’t promise to transport me back to the early days of SF adventure, like the 1955 Ace Double edition. That’s the one I want to read.

The back cover copy for the 1980 edition is certainly intriguing (click on the image at right to read it), but I still find the original 1955 blurb text more appealing, even if it’s not much more than a clumsy excerpt from an F&SF review:

“A magnificent success, both in romance and wonder.”

That is how the editors of The Magazine of Fantasy and Science Fiction open their review of The Last Planet. They go on to say:

“As Miss Norton says in her prologue, there is an old legend concerning a Roman emperor who commanded a too-loyal legion to march across Asia to the end of the world. And, in 8054 A.D., history repeated itself in the crumbling First Galactic Empire when a dictator of Deneb rid himself of the restraints of the Stellar Patrol by assigning it to locate and re-map a forgotten system.

“Her book is the story of the Patrol’s journey’s end and it is remarkable not only for her adroit handling of a theme that has been treated, by less imaginative writers, with something less than adequacy, for her creation of wholly convincing aliens and unstereotyped telepaths, but also for engrossing adventure drama that is skillfully set on a small stage against the massive background of intergalactic intrigue and decadence.”

Turn this book over for second complete novel

The Last Planet was published by Ace Books in 1955. It is 192 pages, originally priced at 35 cents. It is currently available as part of an omnibus volume from Baen, Star Soldiers, which also includes Star Guard (1955, cover here.) Star Soldiers is available in digital format and is currently free for the Kindle from Amazon.com.

Copies of the original Ace Double edition are collectible, but easy to find in the age of online shopping. I bought a copy in December for $1.30, as part of a collection of 10 Ace Doubles for $13.

“The Last Planet” was also issued as a solo novel by Ace sometime in the mid to late 60’s with the same cover which is the version I purchased for 60 cents. Purchased many of these early Norton novels in the small size editions from my local drugstore. Still recall the thrill and anticipation when I found a box set of 7 of these books. Though my memory may be fallible on this point, I believe it included “Witch World”, “Web of the Witch World”, “Catseye”, “The Crossroads of Time”, “The Time Traders”, “Star Guard”, and “Sorceress of the Witch World”. All for $3.50 !

Sounds like a marvelous find! The fact that you remember all 7 decades later is testament to how much of an impact they made on you.

Which one was your favorite?

John,
“Star Guard” has always been my favorite Norton novel, but “The Crossroads of Time” and “The Time Traders” rank high in my memory also. I was probably around 12 or 13 when I bought the set and concepts such as time travel and parallel worlds were new and exciting to me then. Never have run across a similar box set in all the years since and suspect they must have not been very common.

Chuck — I suspect you’re right! I’ve never see a boxed set containing the small-size Ace paperbacks. Would love to see one, though. I’ll keep an eye out.

[…] all the recent attention we’ve been giving to the classic Ace Doubles by Andre Norton, Harlan Ellison, Murray Leinster and others, I would be remiss to not point out that Wildside Press […]