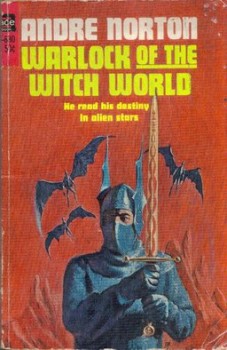 In my previous reviews of Andre Norton’s Year of the Unicorn and Three Against the Witch World, I wrote how exciting it was to discover that a series I had long overlooked was so much fun. I am happy to report that with Warlock of the Witch World (1967), things get even better.

In Science Fiction and Fantasy, edited by Reginald, Menville, and Burgess, Andre Norton wrote that “the background of most of [Witch World] is based on Celtic and early English folklore. Warlock of the Witch World is a retelling of “Childe Roland.” In the original Scottish ballad, the children of the queen are playing ball. When the daughter, Burd Ellen, dances widershins around the church, she vanishes. Her four brothers learn she has been taken prisoner by the King of Elfland. One by one, her brothers set off to save her, each disappearing in turn until only the youngest brother remains. Armed with a magic sword, he undertakes the quest — his siblings’ last hope.

In Three Against the Witch World, the three children of the dimensionally transported American, Simon Tregarth, and a Witch of Estcarp, Jaelithe, have escaped their homeland to the hidden land of Escore. There, the arrival of the triplets — warrior Kyllan, scholar Kemoc, and witch Kaththea — reawakened dark forces long asleep and reignited a war between the forces of Shadow and Light. By the end of the book, the stage for a final confrontation was being set. Allies for the armies of Light were being sought and marshaled in the magically protected Valley of Green Silences.

Warlock opens with new forces arriving in the Valley. Among them is Dinzil, a member of the Old Race, ancestors of the Witches of Estcarp. Kemoc, for some undefinable reason, finds himself disturbed by the newcomer. When he sees his sister, Kaththea, is attracted to him, he grows even more upset. When he tries to tell his brother, Kyllan responds that no one else is bothered by Dinzil. Further, Kemoc’s fears are dismissed by his brother as nothing more than worry that his closeness to his sister will be weakened by her romantic attachment to Dinzil. Of course, Kemoc is proven right to have worried. Dinzil is in league with the Shadow and hopes to be able to use Kaththea and her powers to gain access to other dimensions of greater and darker magics. 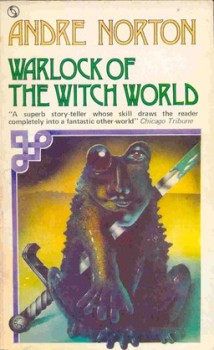 There are several events prior to Kaththea’s abduction that help build the novel’s atmosphere of impending doom and destruction. Kemoc is sent to seek an alliance with the Korgan, a race of aquatic humans, that yields nothing. A brutal attack on Kemoc and a party of refugees from Estcarp ends with him wounded and trapped in lands ruled by Shadow. Finally, a major assault on the Valley of Green Silences leaves many dead. In the anarchy of the battle, Dinzil makes his move and steals off with Kaththea.

In the course of those early events, Norton dazzles the reader with the tremendous inventiveness that’s one of the hallmarks of the Witch World series. To the forces of Shadow, she adds the Thas, a race of carrion-eating underground dwellers that resemble roots.

The thing was small and twisted, its arms and legs, if those four limbs could be dignified by such human applications, were thin, covered with coarse bristles which made them resemble roots with a matting of finer fibers. In contrast the body was thick and bloated and of a white-gray which grew rapidly paler while we looked upon it.

The amphibious Korgan are a not natural evolution, but the result of magical experiments undertaken in ancient days. The ruins of ancient places overrun by Shadow litter the land outside the safe confines of the Valley. There’s just so much color and creativity to each of the Witch World books I’ve read so far. It’s at the point Kaththea goes missing that Warlock becomes a fairytale. Instead of focusing on the war between mighty armies, the story becomes one of the love of a man for his sister and of his quest to rescue her. The only clue Kemoc has is that his sister told Kyllan and her friends she was going with Dinzil to explore an ancient site of Power. Kemoc rides toward the site and before long is forced to follow her trail on foot. His sister’s trail soon proves impossible to navigate through a landscape littered with illusions and magical traps:

The road had been a sure guide, but once I left it behind and threaded a way among the standing stones, I found I entered a maze. There was no point ahead I could fix upon as a goal, and, as I twisted and turned, I found myself heading back into the open space where I had found the scarf. On the second return, I sat down.

Hidden paths lead him to the Mosswives, a strange, secretive forest people. From there he is directed to Loskeetha, a seer. She tells Kemoc that Dinzil has taken his sister to the Dark Tower, a terrible place that leads to many worlds. 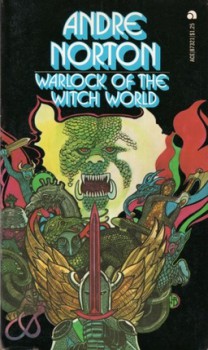 The final leg of the quest for Kaththea, and what comes of it, is a fast-paced adventure through evil haunted lands and cursed dimensions. There’s a fearsome magic sword, recovered from a hidden tomb, that crawls with bloody runes in the presence of evil, and a beautiful ally armed with a unicorn horn. Many of the events happen in near or total darkness in caves and tombs, creating a dense, claustrophobic atmosphere. What’s really real or just a horrid illusion is sometimes as unclear to the reader as it is to Kemoc.

Something I specifically I called out as not liking in Three Against the Witch World was the mock-archaic dialogue of the characters. The same style is used here and I found myself appreciating it. First, it works better here. It furthers the folkloric feel of the story Norton’s telling, and Kemoc’s narration reads like how he would retell the story decades later around the fireside. Secondly, as I’m reading more heroic fantasy I’m pining for something other than the flat contemporary style adopted by so many current writers. Norton’s prose isn’t always spectacular, but it is vivid, and she worked hard to make her stunningly fantastic world feel fantastic.

I’ve seen critiques of the Witch World books describe them as dated and having thin characters. If by dated you mean they don’t have explicit violence or sex, than yes they are. Those elements, and more importantly, the consequences of them are assuredly present. As to thin characterization, I find much of what passes for “better” characterization these days is simply forty or so pages of characters spewing jib-jab. When a man’s on a magical quest to rescue his sister, I don’t really expect to read his extraneous thoughts. Norton does a very satisfying job of creating distinct characters who reflect on matters at hand and the weight of their actions.

Black Gate » Blog Archive » The End of the Story: Sorceress of the Witch World by Andre Norton