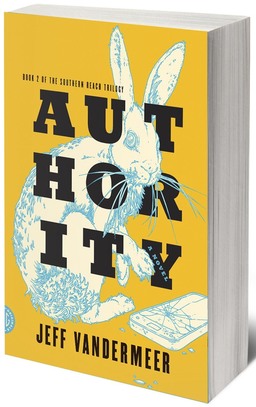 Authority is the second novel in Jeff VanderMeer’s Southern Reach Trilogy, which has a very aggressive 2014 publishing schedule. I recently reviewed the first volume, Annihilation. Though I loved the first book, I also found it incredibly frustrating in that it stacked up a lot of mysteries providing little to no answers. As I had hoped, the second volume, Authority, begins to shed some light on some of these mysteries.

The Southern Reach Trilogy centers upon a government agency (i.e. the Southern Reach) that is responsible for investigating, and containing, Area X, an expanse of (presumably American) southern coastland that has been “captured” (in some strange way) by some sort of unexplained anomaly. Whereas the first volume Annihilation centered upon a seemingly doomed expedition that went into Area X, the second volume Authority centers upon the Southern Reach agency itself outside of Area X, out in the real world (presumably our world).

Our main viewpoint character is John Rodriguez, a fairly young bureaucrat and ex-spy, who is the new director of the Southern Reach. Rodriquez goes by the code name “Control,” which is ironic given that he seems to have so little of it throughout the book. We slowly learn that Control has a somewhat tainted vocational track record and that his new appointment to the Southern Reach is perhaps his last chance to redeem himself. But this government job is like no other that Control has had before and he may very well be in too deep for his own good.

Authority seems to pick up where the last book left off. The Southern Reach has recently picked up three survivors from the last mission — which in itself is puzzling since Annihilation seemed to end with possibly only one survivor. Control attempts to piece together the disparate threads of this last mission as well as various other endeavors that the Southern Reach has also been attempting. The revelations we get — what few we do get — are far from satisfying, much less reassuring, for Control.

At first, Authority seems to wallow in as many mysteries as Annihilation. And though we do get many additional details and hanging threads, Authority goes some ways towards making sense of some of what happened in the previous book. It also helps us to realize that some of the things we thought we knew in Annihilation are not actually so. 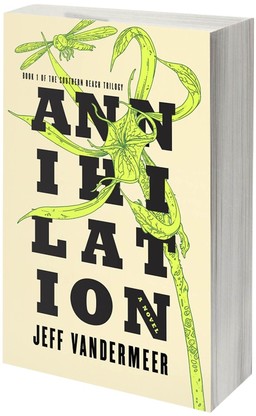 Annihilation was definitely creepy in its investigation of the (paranormal?) Area X. And so Authority may sound like a boring switch: a book that primarily explores a government bureaucracy (yawn). But VanderMeer does a good job of transferring the creepiness-factor from Area X to this everyday world. Such a successful switch piques my interest for the third volume.

There are few (what I would call) dramatic scenes in Authority. But VanderMeer heightens a sense of fearful expectation in various ways. Sometimes even small details can be very unsettling. For example, Control finds in his office (the same office of the former director of Southern Reach) a “secret” room with scrawling all over the walls. In addition, he finds in a drawer of his desk a living plant (not in a pot) and a dead mouse.

[He wonders if it is] some kind of prank or joke. Or continued evidence of a downward spiral, a leap off the cliff into an ocean filled with monsters. Maybe at the end… the [former] director had been practicing for some perverse form of Scrabble (p. 90).

Several such details or hints are given throughout the book, insinuating something much more sinister and foreboding to come.

I’m quickly becoming a Jeff VanderMeer fan. I especially enjoy his unique style (to me anyways) of weird writing. For lack of a better word, it’s a bit more “literary” than the weird stories that I’m used to. In fact, I find his stuff to be a bit challenging at times. At multiple points in Authority, I had to access my phone’s dictionary app for words like “bathetic,” “catafalque,” “sommelier,” “bouillabaisse,” and “reliquary.” This is not your 1930s pulp! Nevertheless, this is not a hard book to read; it’s a page-turning, creepy, thriller. Along with the first volume Annihilation, I highly recommend Authority.

Authority is published by Farrar, Straus and Giroux. It is 340 pages, priced at $13 paperback and $9 for the digital edition. The third and last volume Acceptance is scheduled to be out September 2nd of this year.

As pointed out in my last review, you can see some very interesting animated covers for the trilogy  here.