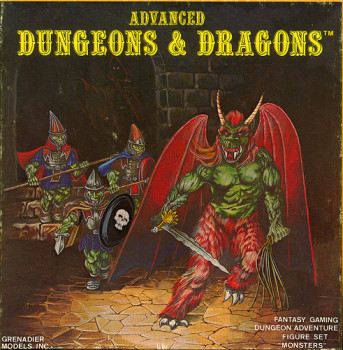 After its initial release in 1974, Dungeons & Dragons enjoyed several periods of mainstream popularity, even faddishness, the largest of which was undoubtedly between 1981 to 1984 or thereabouts, which coincided with the release of not one but two different Basic Sets aimed at younger players. I myself benefited from an earlier surge in interest in the game following the widely publicized disappearance of Michigan State University student James Dallas Egbert III in August 1979. Though the mystery surrounding the young man’s whereabouts was ultimately proven to have nothing to do with D&D, early speculation suggested otherwise, both because Egbert was a player of the game and because it was a game unlike any familiar to most Americans at that time. Playing up the role – no pun intended – supposedly played by this “weird” new game was a great journalistic hook that probably sold a lot of newspapers and magazines.

My father was one of those who, thanks to those newspapers and magazines, became fascinated by the Egbert disappearance and, by extension, Dungeons & Dragons. I also recall that, a couple of years later, he read two novels inspired by these real world events (Rona Jaffe’s Mazes & Monsters and John Coyne’s Hobgoblin), neither of which engendered any interest in me, unlike the news stories, which I followed almost as avidly as he did. It was this fascination on my father’s part that led to my mother’s purchase of a copy of the 1977 D&D Basic Set for him, a set I eventually inherited due to his disinterest in actually learning to play the game itself.

Thirty-five years on, what I remember most keenly about those sensationalist articles is how often they were accompanied by photos of college or high school kids sitting around a table in the center of which were painted miniature figures. In at least one case, I recall a very detailed photograph of an armored humanoid creature – an orc perhaps? – and seeing that image enchanted me. Like most children, I’d played lots of board games, but none of them had playing pieces that looked anything like that one. What kind of game was this Dungeons & Dragons that it had such terrific pieces? 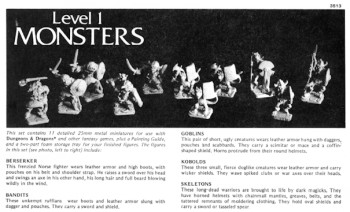 It would still be several more months before I opened up that Basic Set Mom had bought for Dad and a few weeks more after that before my friends and I actually began playing D&D in earnest. The moment I first perused the blue rulebook contained within that box, I was reminded of the articles my father had shared with me and the photographs that accompanied them. That’s because that rulebook carried the unwieldy subtitle “Rules for Fantastic Medieval Role Playing Adventure Game Campaigns Playable with Paper and Pencil and Miniature Figures.” Aha!

But my Basic Set didn’t include any miniature figures. For that matter, it didn’t even include any dice. I was both disappointed and confused by this. How was I supposed to play Dungeons & Dragons without those beautiful little figurines I saw in the articles? Reading the rulebook cleared things up for me: its foreword, penned by E. Gary Gygax, which the title page revealed was one of the creators of the game, stated “you will not even need miniature figures, although their occasional employment is recommended for real spectacle when battles are fought.” Not needed? Yet another disappointment!

As I met other (usually older) people who played D&D, like one of my friends’ high school-age older brother, I started to understand how miniatures could be used in playing the game. I was still a little disappointed that they weren’t necessary, but I was glad to learn that many players and referees did in fact use them at their table. Like so much about the reporting surrounding the Egbert disappearance, newspaper and magazine editors presumably felt that the miniature figures of monsters and wizards would help to draw the attention of readers. In this respect, they were correct. Staring in rapt fascination at those photographs are among my oldest memories associated with roleplaying games. 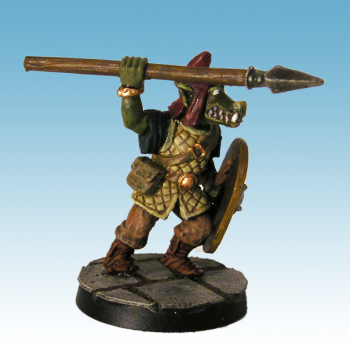 Despite their optional nature, nearly every place that sold D&D in those days also sold miniatures. Many of the larger stores even had glass display cases filled with individual figures that you could purchase. Just like the photos I’d seen, those glass cases held my attention like few other things did. You could also buy miniatures in other formats, like the blister packs that included three or four related figures or the larger boxed sets that contained anywhere from ten to twenty. By the time I entered the hobby, Grenadier Models of Springfield, Pennsylvania held the official license for D&D miniatures, a fact of which the Dungeon Masters Guide and innumerable advertisements in Dragon magazine reminded me.

Over the course of the first few years after I started playing, I bought quite a few miniatures, as did my friends. Sure, they weren’t necessary to play the game, but they did, as Gygax stated in that foreword, add “real spectacle” to play. Whenever I was designing a dungeon, I initially made an effort to use mostly monsters for which I had miniatures. I eventually abandoned the practice, as it led to a certain predictability. Moreover, there were many monsters for which miniatures were never made (or, at least, that I could never find, even in the most well-stocked of glass display cases). Most of us chose specific miniatures to represent our characters, though. Finding just the right one was often an epic quest in its own right.

As the years wore on, I used miniatures less and less. They were a hassle to lug around and they were expensive, at least when compared to the cost of new rulebooks or adventure modules. Moreover, I never became a particularly skilled painter of miniatures. I was alright, but my figures never looked as good as the ones I saw in those articles that first introduced me to Dungeons & Dragons. When I got back into old school gaming a few years ago, I made a point of picking up and using miniature figures and had fun doing so. Their presence on my table brought back a lot of fond memories, in addition to drawing the attention my own son, who, while not all that interested in actually playing the game (unlike his older sister, who did join my friends and I), spent much time staring at my pig-faced orcs and skeletons and trolls, among others. I know roleplayers are often fond of pointing out that RPGs are played “in your imagination,” but I still think there’s something to be said for using miniature figures. Not only do they remind us of the wargaming roots of our hobby, they also played an important role in my own entry into the hobby. I can’t believe I’m the only kid who ever stared in wonder at these remarkable little metal sculptures and decided, “Now that’s a game I want to play!”

Coyne’s Hobgoblin was a cool book.

Great article! I started with that first Basic Set! My mom bought it for the family but no one else but me was interested so I inherited it! There has only been a few years of playing where I haven’t used miniatures, and it’s even worse with the pre-painted plastic minis!

For some reason I’ve never been all that interested in using miniatures with my gaming. That being said, during my SPI Dragonquest days, miniatures were practically mandatory because of that system’s movement rules. So, I got used to using minis, but I still opt out of them for most gaming.

The kids love the miniatures and I must admit they solve problems like who’s standing where when the lasers hit. Me… like James, it’s fun to come back to the hobby and — thanks to the internet — paint the figures right.

In the earliest days my group bought lots of minatures. I still love those early figures best. The Gnome King and the Halfling Scouts are great pieces.

When we switched from D&D to Dragonquest we also switched to cardboard chits. It was just easier and cheaper.

Thanks for another excellent retrospective James. Your sentiments here matched mine exactly during that exciting time.

I could not wait to get to the mall and look into the glass case at the game store with all of those amazing miniatures. I could stare at them for nearly an hour while my little brother went out of his mind with boredom. I don’t know why, but I have always been
“mesmerized” by painted minis. It seems like an illness.

Later, I would spend countless hours trying to perfect the art of painting minis to the same standards as the ones I saw in the case, and sadly I could not do it..there was just no information out that that was easy to obtain. It wasn’t until later and the internet that I found fellow painters giving advice and examples to help me.