Click any of the images to see the complete wrap-around covers.

Galactic Derelict was published in 1959 by the World Publishing Company and has been reprinted in eight different editions over the last half-century. It first appeared in paperback from Ace Books in 1961. It is 192 pages in paperback, priced at 35 cents. The cover is by Ed Emshwiller. If I have a few moments this weekend, I may assemble some of the other covers to display them here.

Well, on this leisurely Memorial Day weekend, I finally have a few minutes to pull together half a dozen covers from the book’s five decades in print, and here they are.

Galactic Derelict has been interpreted by some of the most talented artists in the genre. Above left, we see Ed Emswiller’s original painting from the 1961 Ace paperback. If it looks familiar, it’s probably because the artwork was re-used for one of the best retro-anthologies of the late 90’s: Gardner Dozois’s The Good Old Stuff: Adventure SF in the Grand Tradition (November 1998, my SF Site review from 1999 is here.) 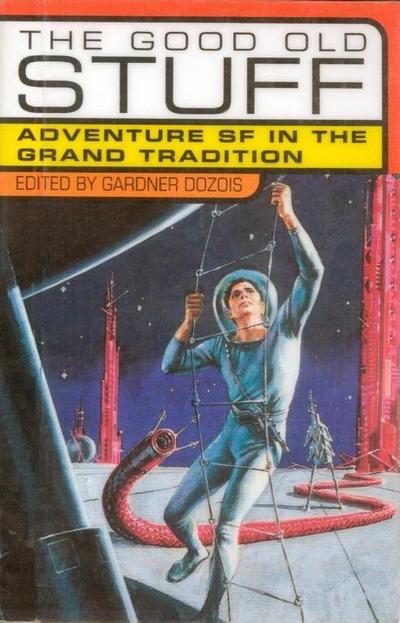 Emsh’s 1961 cover has always spoken strongly to me of 1950s-era adventure SF, and it’s no accident Gardner used it as the cover for The Good Old Stuff. Besides, any cover that portrays an interstellar craft with a rope ladder — and gets away with it! — is aces in my book.

Next is David Meltzer’s very yellow cover for the 1971 Ace reprint, released a decade after the original paperback. By now, the price had jumped from a reasonable 35 cents to a lordly 75 cents… I guess SF fans were made of money in those days. Gone is the flat, sterile alien landscape and the cast-iron spaceship; in its place is a much-more modern spherical spacecraft, and an active volcano. While I’m a huge Emsh fan, I have to admit this is a more eye-catching piece of art — and certainly more suitable for 70s SF readers. The back cover text, however, is identical to the 1961 version.

On the far right is the 1978 Ace reprint, also by David Meltzer. Not as yellow as the 1971 edition and you can’t argue against a cover with monsters on it, but I still think this one is a step down from the ’71 version. At least they updated the back cover copy this time (click the image to see the text). Only seven years from the last version and the cover price has more than doubled to $1.75.

Walter Velez contributed the art for the 1982 Ace edition (above left), which is perhaps my favorite of the bunch — and not just because it has mammoths on the cover. This is an eye-catching visual, with a decayed, collapsing space ship in the background, and Travis Fox faced with much more immediate challenges in the foreground. The price is now $2.25, but the back cover text is identical to the 1978 version. 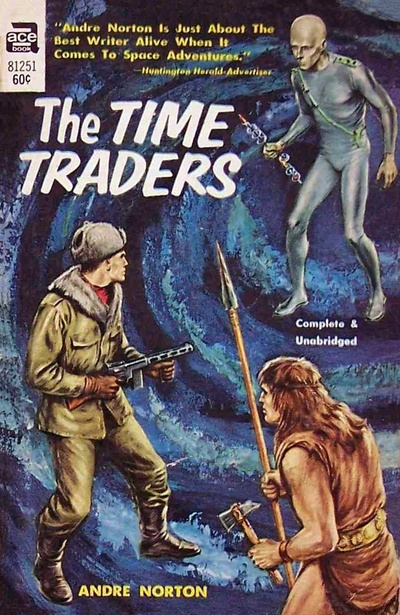 The Time Traders has had its own rich cover history over the decades and I’m tempted to include a few samples here… but then this article will never get done.

The 1982 paperback was the last time Galactic Derelict appeared in the shelves and it was also the last solo edition. After two decades and countless reprintings, Ace finally retired the novel. But it wasn’t the last time the book was in print — in November 2000, Baen reprinted it in an omnibus with The Time Traders in an edition titled simply Time Traders, with a Stephen Hickman cover. A decade later, this version is still in print, in both paper and digital formats. The cover price for the paper edition is $7.99.

Lastly, for the collectors in the audience, the first edition of Galactic Derelict, the 1959 World Publishing hardcover, is on the right above. It’s a handsome book (the complete wrap-around cover, with jacket copy, is here), and the only one I don’t have. Copies come up on eBay for $35 and up from time to time.

To be honest, this isn’t all the covers of Galactic Derelict — there have been multiple foreign language reprints, and a 1978 Gregg Press edition (with a really boring cover that I won’t subject you to). The Andre Norton Archives do a splendid job of cataloging them all, check them out here.

We’ve covered several Andre Norton novels in the past few months, including:

That book did inspire some great imagery. I think the two most evocative to me are the one that juxtaposes the decaying ship with mammoths, and the first one — gotta love what appears to be a mechanical space-worm slithering after the astronaut.

Yeah, I’m fond of the Emsh myself. The mechanical space-worm gets all the attention, but did you notice the tree-man stalking across the landscape on the right?

I did — on a second look. Discovering quirky touches like that are part of the fun of such vintage illustrations!