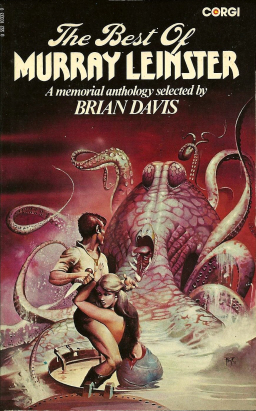 Here’s a vintage curiosity for you.

Last June, I wrote a blog article on The Best of Murray Leinster, volume 14 in Lester Del Rey’s famous Classics of Science Fiction line. It’s one of my favorite titles in a series filled with great books.

Then earlier this year, I stumbled across the UK version of The Best of Murray Leinster for sale on eBay, with a gloriously pulpy cover by Peter A. Jones. I mean, just look at that thing (at left, click for bigger version.) Any time a guy with a 6-inch knife takes on a monster bigger than a Winnebago, you’ve got my attention. Especially when it involves that much purple.

Of course I wanted it. But it was expensive — $16.99, including shipping — and I couldn’t really justify it. (But believe me, I was sooooo close.) Besides, there seemed to be errors in the listing. The book was edited by J.J. Pierce, not Brian Davis. Also, it was first published in 1978, not 1976 as the listing claimed. Unless there were two books with the title The Best of Murray Leinster which, ha ha, would pretty ridiculous.

Turns out publishing is a pretty funny industry. According to the Internet Speculative Fiction Database, there are two books titled The Best of Murray Leinster. The first, subtitled A Memorial Anthology Selected by Brian Davis, was published in paperback in the UK by Corgi in 1976, the year after Leinster’s death. The US edition, from Del Rey, didn’t arrive until two years later.

Well, that’s all the excuse I needed to order the UK version. It arrived a few weeks later, and I was delighted to discover that it’s a completely different book, with only three stories in common with its American cousin: “The Ethical Equations,” “Symbiosis,” and “Pipeline to Pluto.” The remaining seven include some of Leinster’s more entertaining short stories, which were somehow left out of the US edition — such as “Sam, This Is You” and “If You Was a Moklin.”

I was delighted to have them. I also enjoyed Brian Davis’s intro, which is short (one and a half pages), but heartfelt. He describes the collection as follows:

A relatively small part of Murray Leinster’s total output was in the field of SF. Nevertheless his stories in this field are easily his best remembered. This collection brings together a collection of some of his lesser-known SF work, written in the decade immediately following the end of the Second World War. Together they demonstrate the talent that made Murray Leinster so deservedly popular. 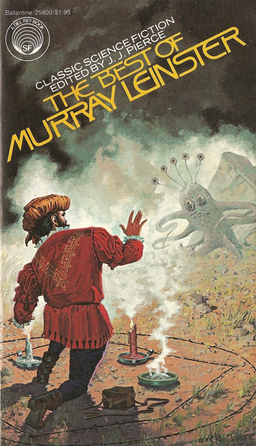 Here’s the back cover copy to the Corgi edition:

Murray Leinster, who died in 1975, was well-known for his contributions to the early SF magazines like Astounding Science Fiction and Thrilling Wonder Stories. As a tribute to this remarkable writer, ten stories have been selected that show the incredible variety of his talent:

Rodney was in the condemned cell — and there was to be no reprieve. Hos only hope was to get back in time to the murder he’d committed — and rearrange a few details…

SAM, THIS IS YOU

THE DEVIL OF EAST LUPTON

It was something in a leathery, hidelike garment which came down to Vermont one morning — and soon Mr Tedder found he was the only conscious being in a desolate, horrifying town…

I came a across a copy of this one in a second hand shop years ago and grabbed it immediately. Leinster’s novels haven’t aged well, but when he was at the top of his game, his short fiction can stand with the best. And there’s enough that either hasn’t been reprinted at all (or has been out of print for so many decades that they might as well not have been reprinted) to make a good sized collection without duplicating either Best of or the NESFA collection from the 90s.

John, this isn’t the only British Best of that is different from the US edition. I think the Fritz Leiber is slightly different (haven’t looked at it in long enough to trust the aging memory). I have a British Best of Henry Kuttner which is a two volume set and contains quite a bit more than the Del Rey edition.

My favorite part of that cover is the disinterest by the woman in the entire affair. It’s as though she’s a real model and done with the shoot, or, she’s the beasts bride and hoping the guy with the knife doesn’t realize that before she trips him during a crucial moment of the fight.

Overlapping anthologies are the bane of collectors…and a blessing, because, of course any excuse to pick up another book is always welcome. I used to have half a dozen different Clark Ashton Smith books that I kept only because they had a few (or even just one) story I didn’t have elsewhere.

Since we’re getting things like new editions of E. R. Eddison, I wish someone would give us some new editions of the complete works of Clark Ashton Smith. Trying to track down even the most recent Night Shade editions of CAS is a very expensive endeavor.

Hey, isn’t that the Watcher in the Water from Peter Jackson’s film version of “Fellowship of the Rings?” A dimension-hopping, tentacled monstrosity with screen presence. Who is his agent, Hastur?

Well James, as someone who bagged those Nightshade editions the instant they were published, I do think someone should indeed help all the little people out there, and at least put the CAS collections out in paperback. They are absolutely indispensable books.

I, too, grabbed the Nightshade CAS titles when published. However, they are available in electronic format, at least for the Kindle.

Whenever I lament not having some book someone inevitably, but always helpfully, suggests that I can get it electronically. I appreciate the suggestion–I really do; but I really desire the tactile experience of the artifact.

Hello? Any publishers out there, I really would enjoy the tactile experience of owning my very own complete works of Clark Ashton Smith in paper or hardback!

I’m currently reading the old Ballantine Smith volume Zothinque. I did not realize how sword and sorcery CAS can be. For example, some scenes from “The Dark Eidolon” could come straight out of a heavy metal music video.