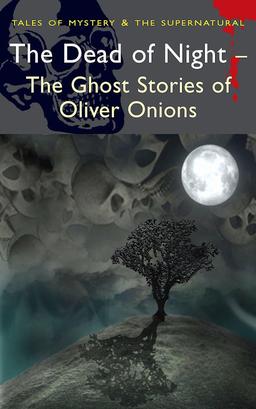 While I was at the World Fantasy Convention last November, I sat in on a panel called “Ghost Stories Without Ghosts.” Truth to tell, I was only there because of the delightful Patty Templeton, who was a guest on the panel, talking about her popular debut novel There Is No Lovely End.

However, the other panelists — S. T. Joshi, Jonathan Oliver, and Darrell Schweitzer — had interesting things to say as well, and several times the conversation came around to Oliver Onions, who was held up as an exemplar of the form.

All very interesting, but who the heck is Oliver Onions?

When faced with a situation such as this (an embarrassing lack of knowledge about a revered figure in 19th Century Supernatural Fiction — which happens a lot more often than you might think), I invariably turn to the same resource: the always reliable Tales of Mystery and the Supernatural. Or, as we like to call them, TOMAToS.

Sure enough, the Wordsworth Tales line includes a huge Oliver Onions volume: The Dead of Night: The Ghost Stories of Oliver Onions. 627 pages of creepy fiction featuring werewolves, haunted houses, a dream shared down through history, living ghosts, an obsessed sculptor, characters in a romance novel who come to life, a temptress who’s doomed countless men through the centuries until she falls in love for the first time, a haunted meadow, a cheery Christmas ghost who disobeys the Special Committee on Ethereal Traffic and Right of Way to save lives, and many others.

George Oliver Onions (13 November 1873 – 9 April 1961) was a British short story writer and novelist who published over 40 novels. His collections included Back o’ the Moon (1906), Widdershins (1911), Ghosts in Daylight (1924), and The Painted Face (1929). H.P. Lovecraft considered his famous tale “The Beckoning Fair One” to be one of the most effective and subtle ghost stories in the English language.

This volume has an introduction by TOMAToS series editor David Stuart Davies. Here’s the blurb from the back of the book.

Oliver Onions is unique in the realms of ghost story writers in that his tales are so far ranging in their background and substance that they are not easily categorised. His stories are powerfully charged explorations of psychical violence, their effects heightened by detailed character studies graced with a powerful poetic elegance. In simple terms Oliver Onions goes for the cerebral rather than the jugular. However, make no mistake, his ghost stories achieve the desired effect. They draw you in, enmeshing you in their unnerving and disturbing narratives. This collection contains such masterpieces as The Rosewood Door, The Ascending Dream, The Painted Face and The Beckoning Fair One, a story which both Algernon Blackwood and H. P. Lovecraft regarded as one of the most effective and subtle ghost stories in all literature. Long out of print, these classic tales are a treasure trove of nightmarish gems.

I ordered a copy as soon as I returned from the convention, and have been slowly making my way through it ever since.

We’ve covered a baker’s dozen volumes in the Wordsworth Tales of Mystery And The Supernatural series so far:

Night Terrors: The Ghost Stories of E.F. Benson
A Night on the Moor & Other Tales of Dread by R. Murray Gilchrist
The Crimson Blind and Other Stories by H.D. Everett
Couching at the Door by D.K. Broster
The Casebook of Carnacki The Ghost Finder by William Hope Hodgson
The Beast with Five Fingers by W.F. Harvey
The Power of Darkness — Tales of Terror, by Edith Nesbit
Alice and Claude Askew’s Aylmer Vance, The Ghost-Seer
The Black Veil & Other Tales of Supernatural Sleuths edited by Mark Valentine
Voodoo Tales: The Ghost Stories of Henry S. Whitehead
Sherlock Holmes: The Game’s Afoot, edited by David Stuart Davies
The Casebook of Sexton Blake, edited by David Stuart Davies

The Dead of Night: The Ghost Stories of Oliver Onions was published by Wordsworth Editions on August 15, 2010. It is 627 pages, priced at $7.99 in paperback, and $3.99 for the digital edition. It is still in print.

I have the Dover edition of Widdershins, which is quite slim. I hadn’t realized that Onions had written so much. I’ll definitely have to get a copy of this.

I’ve only read “The Beckoning Fair One” but was quite impressed. I intend to read more Onions in the future. And John, you’re not the only person who is well-read in the field who is unfamiliar with Onions. I’ve encountered others as well.

> I have the Dover edition of Widdershins, which is quite slim. I hadn’t realized that Onions had written so much.

Have you had a chance to read it? Anything worth talking about?

> John, you’re not the only person who is well-read in the field who is unfamiliar with Onions. I’ve encountered others as well.

How about Oliver’s even lesser-well-known sister, Lavender Leeks?

“The Cigarette Case” is a good one from Widdershins. I’ve seen more than one commentator claim “The Beckoning Fair One” as the greatest ghost story ever. My own pick for that meaningless title would be “Afterwards” by Edith Wharton, but the Onions story is very powerful.

Onions was always mentioned in essays I read on ghost stories but I could never find his collections. He seemed like someone I need to read. Sadly,since I finally found and bought this last year I haven’t read a single story in it. Maybe this will inspire me to crack the electronic cover.

[…] Psychical Violence and Beckoning Beauties: The Dead of Night: The Ghost Stories of Oliver Onions […]