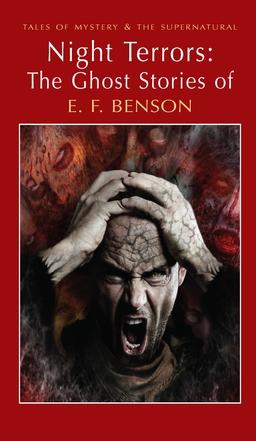 Wordsworth’s Tales of Mystery And The Supernatural volumes (or, as we like to call them, TOMAToS) have been a virtual graduate course in British horror for me, introducing me to a host of classic Nineteenth and Twentieth Century ghost story and supernatural fiction writers. But I have to admit I was a little relieved to come across Night Terrors: The Ghost Stories of E.F. Benson, since at least I’ve heard of E.F. Benson.

Unlike many of the subjects of the Wordsworth collections — who’ve been sadly neglected by modern readers — Benson is still fondly remembered. His work has seen many modern collections, including the Panther edition of The Horror Horn (1974), Desirable Residences and Other Stories (1991), The Collected Ghost Stories of E. F. Benson (1992), Fine Feathers and Other Stories (1994), and the five-volume The Collected Spook Stories from Ash-Tree Press (1998 – 2005), which collects all of his supernatural fiction.

H.P. Lovecraft thought highly of Benson’s work, especially “The Horror-Horn,” “The Man Who Went Too Far,” and “The Face,” calling him an important contributor to the weird short story. If you’re interested in a nice one-volume introduction to his work Night Terrors is an excellent option. It collects 54 of his best-known stories, and an introduction by David Stuart Davies, in a handsome and economical 718-page paperback.

His body was pressed against the wall at the head of the bed, and the face was a mask of agonized horror and fruitless entreaty. But the eyes were already glazed in death, and before Francis could reach the bed the body had toppled over and lay inert and lifeless. Even as he looked, he heard a limping step go down the passage outside.

E. F. Benson was a master of the ghost story and now all his rich, imaginative, spine-tingling and beautifully written tales are presented together in this bumper collection. The range and variety of these spooky narratives is far broader and more adventurous than those of any other writer of supernatural fiction. Within the covers of this volume you will encounter revengeful spectres, vampires, homicidal spirits, monstrous spectral worms and slugs and other entities of nameless dread. This is a classic collection that cannot fail to charm and chill.

We’ve covered a dozen volumes in the Wordsworth Tales of Mystery And The Supernatural series so far:

A Night on the Moor & Other Tales of Dread by R. Murray Gilchrist
The Crimson Blind and Other Stories by H.D. Everett
Couching at the Door by D.K. Broster
The Casebook of Carnacki The Ghost Finder by William Hope Hodgson
The Beast with Five Fingers by W.F. Harvey
The Power of Darkness — Tales of Terror, by Edith Nesbit
Alice and Claude Askew’s Aylmer Vance, The Ghost-Seer
The Black Veil & Other Tales of Supernatural Sleuths edited by Mark Valentine
Voodoo Tales: The Ghost Stories of Henry S. Whitehead
Sherlock Holmes: The Game’s Afoot, edited by David Stuart Davies
The Casebook of Sexton Blake, edited by David Stuart Davies

“The Room in the Tower” is, I think, the most frightening ghost story that I have ever read.

Wow — quite an endorsement, Thomas!

[…] of his work is now long out of print, but Wordsworth published Night Terrors: The Ghost Stories of E.F. Benson (part of their terrific Tales of Mystery & The Supernatural series, which we’ve discussed […]