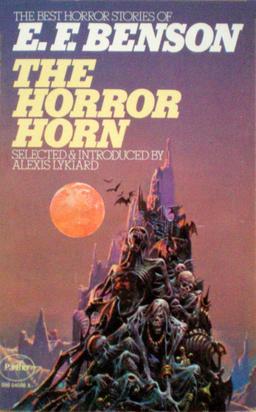 Is Bruce Pennington the finest cover artist in publishing history?

Probably. I talked at length about my own interest in his art — and how we licensed two of his paintings as covers for Black Gate — in The Lost Art of Bruce Pennington. Over the years, I’ve collected much of his work and seen a great deal more online and in various art books, but from time to time I’m still surprised to see a previously undiscovered Pennington cover on a hard-to-find book (as I was with the Panther edition of Fritz Leiber’s Night Monsters back in January.)

So you can understand my delight last week when I stumbled upon The Horror Horn on eBay, a 1974 collection by British horror writer E. F. Benson. It had a marvelously macabre cover by Bruce that I’d never laid eyes on before. In fact, I didn’t even know this book existed. The bidding stood at 5 bucks, with less than two days to go.

Well, you know how reluctant I am to pay more than $8 – $10 for a paperback. It’s rare indeed that the patient collector has to pay more than that for anything. But this was an exception, and I submitted my bid for $14 and sat back to see what happened.

In the meantime, I did a little homework on E. F. Benson. We’ve never really mentioned Benson here before (although he’s popped up in horror collections from time to time, including Otto Penzler’s magnificent The Vampire Archives and Henry Mazzeo’s Hauntings: Tales of the Supernatural), and that’s probably an oversight.

Benson, who died in 1940, was an English novelist and short story writer, with 68 novels to his credit and 10 collections published in his lifetime. He was a frequent Weird Tales contributor and he also appeared regularly in British publications like Hutchinson’s Magazine and The Illustrated London News.

Most of his work is now long out of print, but Wordsworth published Night Terrors: The Ghost Stories of E.F. Benson (part of their terrific Tales of Mystery & The Supernatural series, which we’ve discussed many times) in 2012, and Ash-Tree Press collected all of E.F. Benson’s supernatural fiction in The Collected Spook Stories (five volumes, 1998 – 2005 — that’s them, below right). 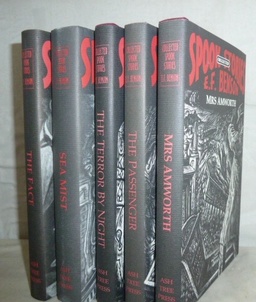 In his “Surprising literary ventures” column for The Spectator, Gary Dexter wrote a brief review of The Horror Horn in 2006. Here’s what he said, in part:

The title story concerns a female yeti who pursues the quivering hero down a mountainside with the specific intention of catching and ‘mating’ with him. ‘She was enveloped in a thick growth of hair grey and tufted, and from her head it streamed down over her shoulders and her bosom, from which hung withered and pendulous breasts… A fathomless bestiality modelled the slavering mouth and narrow eyes.’ And I must draw a veil over what happens next.

Here’s the description from the back of the book (which I painstakingly transcribed from this blurry pic on eBay:

Are you ready for the ultimate in sheer horror?

Here are stories from the darker reaches of the mind, stories which will cling like mould in your memory because there is something horribly real and convincing about them. Walk carefully down these familiar paths — you will find the unfamiliar awaiting you. What is that shadow in the corner? The dark area behind the stairs? The movement behind you when your candle goes out? Why is there blood in the coffin? Each of these tales rings an ominous bell, tolling in the mind’s graveyard, reminding you of some hidden nightmare.

Be Warned: Don’t read it at bedtime…

By the time the eBay auction ended, the price had skyrocketed to $22.27… perhaps a fair price for a nearly 40-year-old paperback in great condition, but a little beyond my means. I lost out on this one, but I’m on the hunt for another copy, and I know one will turn up. Eventually.

The Horror Horn was published by Panther Books in 1974. It is 205 pages in paperback, cover priced at 40 p. The cover is by Bruce Pennington. It has never been reprinted, and there is no digital edition. If you see a copy for sale, do me a solid and shoot me an e-mail. I would appreciate it.

Benson isn’t read nearly as much as he should be. The Wordsworth volume sounds like a real bargain – I have the Collected Ghost Stories volume that Carrol and Graf put out in the 80’s. Years ago, when my sons had gotten old enough, we started our own observance of the Victorian tradition of reading a ghost story on Christmas Eve. “The Room in the Tower” had the honor of being the first story, and my sons still talk about it! (Though their favorite over the years was H.R. Wakefield’s “Blind Man’s Buff.)

That sounds like a marvelous tradition, Thomas. I wonder if my kids would sit still long enough on Christmas Eve to let me try it…

Bruce Pennington? That’s who you are going with? Really? 🙂

You’re just jealous you didn’t think of him first.

The Wordsworth trade paperback has about 60 stories in it. It is a real bargain. I have been reading a Benson story a night starting this past weekend on the count down to Halloween. He had seven stories in WEIRD TALES,five in FAMOUS FANTASTIC MYSTERIES, and two in GHOST STORIES. TWILIGHT ZONE MAGAZINE reprinted a story in the 80s.

E. F. had two brothers who also dabbled in ghost stories. Ash-Tree published a collection of their work. It’s long out of print and expensive, but Ash Tree has put most of their backlist up in ebook from including all the Benson volumes.

Here’s the link to A. C. and R. H. Benson’s GHOSTS IN THE HOUSE http://www.ash-tree.bc.ca/atp13ghostsinthehouse.htm

> The Wordsworth trade paperback has about 60 stories in it. It is a real bargain.

Yeah, I can see I’m overdue to showcase a few more volumes in the Wordsworth Tales of Mystery & The Supernatural line (or as Howard keeps calling them, TOMAToS), including this one.

> I have been reading a Benson story a night starting this past weekend on the count down to Halloween.

Another marvelous tradition! I’m going to have to start taking notes…

> It’s long out of print and expensive, but Ash Tree has put most of their backlist up in ebook from including all the Benson volumes.

I had no idea Ash Tree had made digital versions of their books available. That’s great news!

> They’ve published some good Holmes stuff through their other imprint, Calabash Books.

I also wasn’t aware Chris and Barbara had ANOTHER imprint. Man, they must be one busy couple.

[…] fondly remembered. His work has seen many modern collections, including the Panther edition of The Horror Horn (1974), Desirable Residences and Other Stories (1991), The Collected Ghost Stories of E. F. Benson […]

Thanks for a great website, Black Gate is part of my daily reading. Have really enjoyed the ‘Vintage Treasures’ articles and have hunted down several of the books reviewed.
If you haven’t found a copy of ‘Horror Horn’ yet, Amazon has the 1974 edition for under 7 bucks.

Right you are — thanks for the tip! *Off to Amazon*