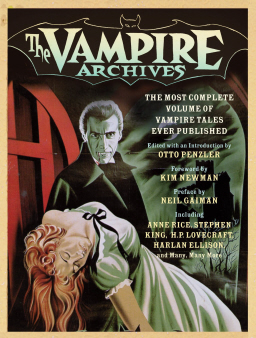 Last week I wrote a brief piece on Otto Penzler’s marvelous The Big Book of Adventure Stories, and I’ve been having so much fun with it that I decided to look at some of his other door-stopper genre anthologies. So here we are this week with The Vampire Archives, one of the best collections of vampire stories I’ve ever encountered.

What makes it so great? It’s over 1,000 pages of the finest vampire fiction ever written, old and new, in a beautiful and inexpensive package. This is the only volume you need to bring yourself up to speed on vampire lit of the 18th, 19th, 20th and 21st centuries — no small claim.

It includes the classics you’d expect, like John Keats’ 1820 poem “La Belle Dame sans Merci,” Guy de Maupassant’s “The Horla,” and “The Girl with the Hungry Eyes” by Fritz Leiber — as well as many that you might not, like Ambrose Bierce’s 1891 tale “The Death of Halpin Frayser,” an excerpt from Lord Byron’s poem “The Giaour,” “Ligeia” by Edgar Allan Poe, “The Lovely Lady” by D. H. Lawrence, and even a Sherlock Holmes tale, “The Adventure of the Sussex Vampire” by Arthur Conan Doyle.

There’s a generous selection of fiction from the pulps, including “Stragella” by Hugh B. Cave, “Revelations in Black” by Carl Jacobi, “When It Was Moonlight” by Manly Wade Wellman, and Clark Ashton Smith’s Averoigne tale “The End of the Story.”

Here are some of the greatest modern vampire stories — like the Dan Simmon’s dazzling novelette “Carrion Comfort” (eventually expanded into his terrific novel of the same name), “The Master of Rampling Gate” (1984) by Anne Rice, “Popsy” by Stephen King, “The Man Who Loved the Vampire Lady” by Brian Stableford, and “When Gretchen Was Human” by Mary A. Turzillo (from 2001). 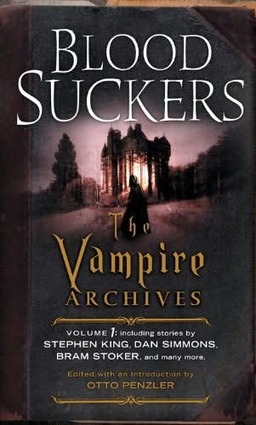 It doesn’t stint with the novellas either, which is something you can’t say about most horror anthologies. It includes three: Arthur Conan Doyle’s “The Parasite” (1894), Sheridan Le Fanu’s classic “Carmilla” (1937), and “Midnight Mass” (1990) by F. Paul Wilson.

Penzler provides an introduction to every story. Horror novelist Kim Newman wrote the foreword, and the preface is by Neil Gaiman.

Here’s the complete Table of Contents. I was going to run through it and count how many stories there were for you, but I got tired halfway though and had to have a bit of a lie down. 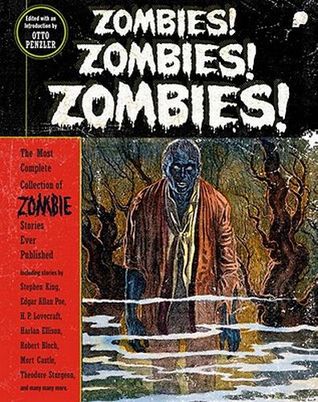 The Vampire Archives was published by Vintage on September 29, 2009. It is 1,056 pages in a massive, over-sized trade paperback, priced at $25. There is no digital edition, but it is still in print.

The eye-catching cover is the poster for the 1958 Christopher Lee film “Le Cauchemar de Dracula” (the French version of Horror of Dracula.)

Otto Penzler has built quite a library of Big Book anthologies over the last decade, all focusing on genre fiction. He’s produced roughly one per year since 2007. They include:

See all of our most recent book coverage here.

[…] pages), and The Black Lizard Big Book of Pulps (a whopping 1168 pages). Perhaps my favorite is The Vampire Archives, which describes itself as “The Most Complete Volume of Vampire Tales Ever Published” […]

Whoa. I don’t think of myself as a big fan of vampire fiction, but this collection is impressive.
Inclusion of variant & borderline vampire stories (those missing standard bats & fangs & Lugosi stylings) really makes the book.

Revelations in Black might not be Carl Jacobi’s best story, but it has the distinction of having been rejected from Weird Tales by Farnsworth Wright, and then haunting the editor enough that he wrote to Jacobi months later asking if he could buy it.

I don’t have this collection. And that injustice will not stand.

[…] popped up in horror collections from time to time, including Otto Penzler’s magnificent The Vampire Archives, and Henry Mazzeo’s Hauntings: Tales of the Supernatural), and that’s probably an […]

[…] Penzler’s giant anthologies, including the 1,056-page The Vampire Archives, The Big Book of Adventure Stories, and The Big Book of Christmas Mysteries, occupy a place of […]