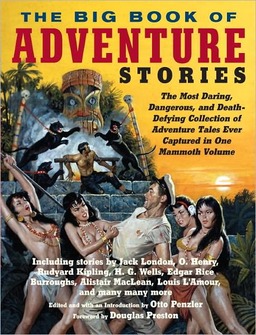 It shouldn’t be a surprise that I love these big omnibus collections, and The Big Book of Adventure Stories is much bigger and omnibus-er than most. Weighing in at a generous 896 pages, it’s Penzler’s generous gift to those of us who love fast-paced pulp adventure… or just need a door stop (for a bank vault).

Everyone loves adventure, and Otto Penzler has collected the best adventure stories of all time into one mammoth volume. With stories by Jack London, O. Henry, H. Rider Haggard, Alastair MacLean, Talbot Mundy, Cornell Woolrich, and many others, this wide-reaching and fascinating volume contains some of the best characters from the most thrilling adventure tales, including The Cisco Kid; Sheena, Queen of the Jungle; Bulldog Drummond; Tarzan; The Scarlet Pimpernel; Conan the Barbarian; Hopalong Cassidy; King Kong; Zorro; and The Spider. Divided into sections that embody the greatest themes of the genre — Sword & Sorcery, Megalomania Rules, Man vs. Nature, Island Paradise, Sand and Sun, Something Feels Funny, Go West Young Man, Future Shock, I Spy, Yellow Peril, In Darkest Africa — it is destined to be the greatest collection of adventure stories ever compiled.

Otto Penzler had produced a small library of massive anthologies over the past few years, including The Big Book of Ghost Stories (848 pages), Zombies! Zombies! Zombies! (832 pages), The Black Lizard Big Book of Black Mask Stories (1136 pages), and The Black Lizard Big Book of Pulps (a whopping 1168 pages). Perhaps my favorite is The Vampire Archives, which describes itself as “The Most Complete Volume of Vampire Tales Ever Published” — and at 1,056 pages, I believe it — which doubtless deserves its own New Treasures article.

The Big Book of Adventure Stories was published May 31, 2011 by Vintage Original. It is 896 pages in oversized trade paperback, priced at $25. The eye-catching cover is by Rafael Desoto.

The covers of these old books like this crack me up. They scream to my 13-year old inner child: “You must buy this!”

I know. And this one isn’t even that old!

I think they left out the “deadly Amazon beauties” but I think I’ll pick up a copy anyway. 🙂

“some of the best characters from the most thrilling adventure tales, including The Cisco Kid;…… Queen of the Jungle; Bulldog Drummond; Tarzan; The Scarlet Pimpernel; Conan the Barbarian; Hopalong Cassidy……… Zorro; and The Spider”.

An Anthony “Buck” Rogers reprint also appears in this volume. That does remind that while one has “classic monsters” such as Stoker’s Count Dracula, Mr. Hyde and the Frankenstein’s Monster, “classic adventure heroes” actually from prior to 1938 seem rarer. Some of these properties have lain inert in many ways. Buck Rogers has not had a TV or film project since 1981, for example.

@PB210: Hey, is “Buck” Rogers now in the public domain? One couldn’t draw upon any content from the later adaptations–serial comics, TV show, etc.–but that is a character and premise with a lot of potential to have real fun with.

> I think they left out the “deadly Amazon beauties” but I think I’ll pick up a copy anyway.

I think that’s covered under “Island Paradise.” How can you have an island paradise without Amazon beauties?

> An Anthony “Buck” Rogers reprint also appears in this volume.

Holy cats — you’re right. How did I miss that? The complete short novel “Armageddon—2419 A. D.”, featuring the first appearance of Buck Rogers (from the August 1928 AMAZING STORIES) is also included.

> Buck Rogers has not had a TV or film project since 1981, for example.

Whew… is that true? Talk about a property ripe for a re-make!

> Hey, is “Buck” Rogers now in the public domain?

Possibly – although I doubt it. We’re currently in a holding pattern at 1927 (finagled by Disney lawyers, to prevent Walt Disney’s Mickey Mouse from entering the public domain), and “Armageddon—2419 A. D.” appeared in 1928. So it won’t enter the public domain for some time.

If the copyright wasn’t renewed by the creator (Philip Francis Nowlan) then it’s possible. I’m sure there’s an easy way to look it up, if only I could think of it. 🙂

Recently got and read both Armageddon 2419 A.D. and “Airlords of the Han” on my kindle app device for FREE from the Kindle library. Also you can download them from wikisource/project Gutenburg, etc. because they are “Public Domain”.

[…] week I wrote  brief piece on Otto Penzler’s marvelous The Big Book of Adventure Stories, and I’ve been having so much fun with it that I decided to look at some of his other […]