Before we go any further in the discussion of the origins of fantasy and science fiction in ancient literature, I wanted to address a basic question:

Did the Greeks believe any of this was true?

When we sit down to read a work of fantasy, we are very aware of reading about a constructed space. We know we are temporarily inhabiting an imagined world, and much of our delight comes from that work of imagination. Our appreciation of any verisimilitude comes attached to that sense of creation: it is exciting to us that the work we are reading is believable even though it is pretend.

(This is, of course, what non-geeks often don’t understand about those of us of the geekly persuasion. How, they wonder, can you spend so much time arguing over the minutiae and plot holes of a story in which a basic premise is “we live in space and , even more unbelievably, do without money”? The answer is that even a pretend world needs internal consistency, and we argue because tolerances on that consistency vary. I can’t stop tearing my hair out at the messed up timeline of Disney’s Beauty and the Beast, my husband thinks this is hilarious, I love him anyway.)

But what about the person in the fifth century BC, listening to Homer? What did they think they were listening to? History, fiction, or something else?

That’s a more difficult question to answer than you might think. The idea of “genre” didn’t quite exist yet, so you couldn’t ask someone “is this history, or fiction?”

You could ask, “Is this true?” But even then you’d be dealing with a pretty new idea, in the grand scheme of things.

Did the Greeks believe their gods were real? Yes. Real like you and I are real? Yes, and if they doubted that they believed it was awfully dangerous to not do what you were supposed to do just in case. Philosophers would later ask whether the gods were memories of great humans or pure invention, but the average person on the Greek street didn’t spend much time on the question. The gods were forces to be satisfied and kept happy, and they didn’t much care what you thought about them as long as they got their due.

Did they believe the Trojan War actually happened? Yes (and it appears they were right, even if we don’t know much else about it). Did they believe it happened just like in Homer?

Ah. There it gets sticky. When we talk about truth, we have the idea of one correct story in which all the facts are correct. The Greeks on the other hand were much more comfortable with the idea that there could be many stories, all of which contradicted each other, and one way a poet could show off was by demonstrating how many versions of a story he knew. So when you asked that Greek person about whether or not Homer’s work was true, he’d have to ask you which of those versions you meant. And then he might just tell you that they were all true, although he didn’t know which was the one that actually happened.

These works, what we call the “Homeric Corpus”, are still in the realm of of oral tradition. They were written down at some point (Probably – maybe – in the sixth century BC) and then over the next few hundred years were edited by many, many hands. So rather than the work of one author we have the imagination of many, tangled with half remembered stories and embellishments.

As we move on to our next work, Apollonius Rhodius’ Argonautica, that will no longer be the case. While much of the Odyssey evolved organically the Argonautica is a very deliberate artistic work.

But don’t let that scare you: there are still monsters. Lots of monsters. And some of them don’t even look like us. 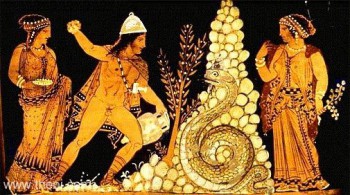 Have you read Gene Wolfe’s Soldier in the Mist books? An interesting take on exactly this subject.

I’ve wondered that question myself–thanks for shedding some illumination on it.

My perspective on this is influenced by a Professor I had in College who noted the “Mythos/Logos” separation. This occurred in western culture at the time of the Trojan War. Essentially Greece went into a “Dark Ages” after that and emerged as what we know of Ancient Greece until that itself broke down and was replaced by Rome.

But in the Trojan war man was still controlled by the Gods. Influence of them, fear of them, desire for their favor, ritual. The damage the war did, and for nothing other than foolish pride turned both Man and the Gods. The latter swore a pact not to interfere with man directly, the former as outlined in the aftermath, the Odyssey, started working with their minds more than myth and ritual. By the time Ancient Greece rolled back in full glory they were largely practical, logical people though they still clung to past myths and laws.

He was real passionate about it. My favorite part was how cruel time was. The Trojan War was started when the apple of Discord was thrown at a party of gods and goddesses and declared that one prettiest would have it. So three goddesses, Hera, Athena, Aphrodite ended up being the top competitors. Each offered a bribe. Hera offered a great and stable kingdom and a perfect queen. Athena offered wisdom, knowledge. Aphrodite offered to give the hand of the most beautiful woman in the world. Paris was a young man, though his lifetime would be but one day to the gods. If he had been a mature man, he would have chosen Hera and had his kingdom be the greatest in the world. If he was an old man he’d have chosen wisdom, so his old age would be full of great wisdom seekers and his words live on after him. But a young man is mostly into…

“The Greeks on the other hand were much more comfortable with the idea that there could be many stories, all of which contradicted each other . . .”

Well, some Greeks. When Socrates asks Euthyphro what piety is, Euthyphro initially responds that piety is what the gods love. But Socrates is unsatisfied by this answer pointing out, according to Homer, that one god may love X, but another god may hate X.

I don’t know how typical Socrates’ mindset was, but it shows that at least some Greeks obviously thought historical or canonical consistency was important.

I think even today the concept of “true” is a complicated one.

For example, Bambi is not a true story (sorry if I have ruined things for you), but for me the depiction of a child’s first experience of snow and ice rings true, especially if the child has never experienced snow and ice until it got to the to the age of being able to talk to the level that Bambi talks.

Also, the Greeks were a diverse people. Did the Greeks believe Homer’s account of Troy was accurate? Well, do western people today still believe that the world was made by God in 6 days? The answer to that question is: some do see it as being literally true, and others think this a ridiculous notion, and yet others have quite different views.

Finally, the people we call Ancient Greeks actually covers a diverse people over centuries. Think how the social consensus on what is valid evidence has changed in Europe over the last five centuries: back in the day, testimony given under torture was given more credence than what someone just said when asked, and death bed statements were given extra weighting.

I suspect that they did believe. I say that because the myths were often stories showcase Greek ideals. When the Cyclops mistreats his guests he shows low morality and when Odysseus “sticks-it-to-him” it was probably met with cheers. In times of doubt they had heroes to allude to much like other peoples have looked to Moses or Beowulf or Gilgemesh. They were the original sword and sorcery heroes. I think on the idea of Gods there will always remain in people a seed of doubt. I don’t think that can either be proven nor disproven because at its core it is belief. I hope that all made sense, that’s my three beers worth. Time to take this chimp to bed.