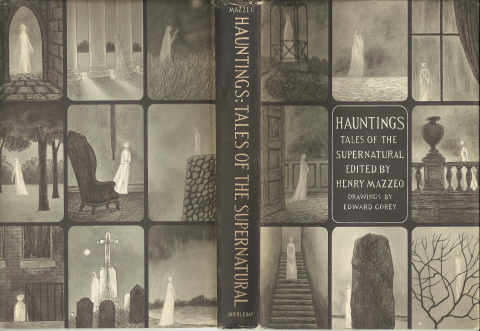 When I was a kid in the late 60s/early 70s, I was fascinated by the fantastic. It didn’t matter what it was: films, comics, television, or books. Although, until I learned to read, my exposure to the genre — and especially horror — was through purely visual media such as comics and whatever was on TV.

Luckily my earliest talent, which later turned out to be pretty much my only one, was that I took to reading like a cultist takes to, well, cults! This opened up a whole new world for me, as our elementary school had a well stocked library.

And it didn’t take long to catch on that the best books didn’t have any pictures in them. Sure, they had great covers, but inside there was nothing but words! Lots and lots of wonderful words that helped me fill my mind with images that no film or comic could match.

Another important thing that I learned was that adults didn’t care what you read as long as it was a genuine book. Comics brought only disdain and suspicion.

Especially those wonderfully gory black and white comics published by Warren, Skywald, and Eerie Publications, those you had to hide from the adults. My dad always called those comics “Doug’s damned weirdo books.”

But books? Those were something different. Adults would look and say “How wonderful” He’s reading!”

And since these were books from the school library, then they just had to be safe, mundane, and respectable. They were so secure in these beliefs that they never ever bothered to take a good look at what I was actually bringing home.

That was their tough luck. I could parade these books around, read them when and were I wanted, and I never ever had to justify it. This was what I later learned to be “hiding in plain sight.”

Even after more than 41 years, I can tell you exactly which horror collections we had at the Johnny Clem Elementary School library.

We had all 3 of the Alfred Hitchcock horror collections for young readers (Haunted Houseful, Monster Museum, and Ghostly Gallery), both volumes of the Tales to Tremble By collections, Robert Arthur’s Ghosts and more Ghosts, and lastly Hauntings: Tales of the Supernatural.

And to this day I still have copies of every one of these books. Back then, I loaned them out so much that I considered them to be my own private property.

Even though at the beginning I had to convince the librarians that I was a good enough of a reader that I could handle the “big kids” books and read them by myself.

Now it’s that last book, Hauntings, which I’d like to tell you about.  What attracted me immediately was its genuinely creepy and atmospheric cover by the late, great Mr. Edward Gorey. 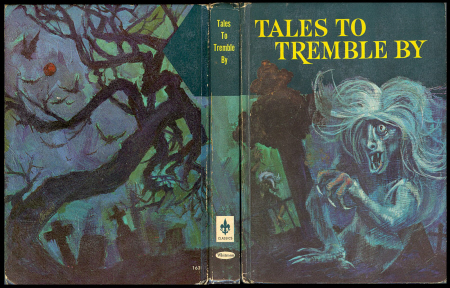 Now Mr. Gorey is a genre in himself, who deserves an article dedicated to his work alone.  Mr Gorey’s dust jacket and interior illustrations combined with the choice of stories between the covers makes this, in my opinion, one of the most perfect reading experiences you could have.

Hauntings appears to be the only book ever edited by Henry Mazzeo, which is a real shame considering the quality of the collection he put together. The rear dust jacket flap states that he was a copywriter for Scholastic Books and was, at the time, working for Esquire and Gentlemen’s Quarterly.

I can’t decide if young people’s literature has been dumbed-down or not, but how many 10 year olds are cutting their teeth on such authors as Manly Wade Wellman, William Hope Hodgson, Joseph Payne Brennan, August Derleth, Robert Bloch, M.R. James, Henry James, and H.G.Wells?

This is literally a Who’s Who of horror literature.

I keep using the term literature when describing this collection, and that’s 100% accurate — but still slightly misleading. All of the tales included here are so well written that even the pulp stories in the collection qualify as literature. Yet every single one is also entertaining as all hell. So we end up with a collection of stories that seems imposing when looking at the list of authors, and yet all are such page turners that you will devour the collection in one evening. 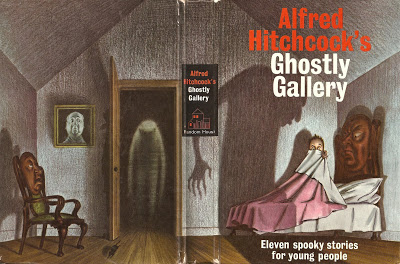 Now let’s take a look at some of them there stories!

The collection opens up with August Derleth’s “The Lonesome Place.” Now I know that it seems to be a trendy Internet pastime to pick on Mr. Derleth. I know that his posthumous collaborations with H.P. Lovecraft aren’t collaborations, or even of the highest quality, and that many people take issue with his interpretation of the Cthulhu Mythos. He did divide the Mythos into good guys and bad guys, which doesn’t sit well in some circles.

What he did do though, which makes every other transgression forgivable, is co-found Arkham House, which saved Mr. Lovecraft from obscurity. Now let us all hail August Derleth!

So even though he’s praised as editor/publisher and damned as “Mythos mutilator,” he was also an outstanding story teller when he wanted to be. And “The Lonesome Place” is an excellent example of how well he could write.

“The Lonesome Place” tells of a small boy’s fear of walking down the street at night. A very long, tree-lined street without lights. He imagines what horrors are waiting for him in the darkness. This horror might just be real.

We are never sure though, and that’s what makes this one of the finest horror tales ever published. It frightens me even today. 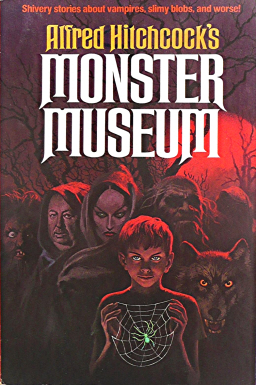 I grew up on a very long street that was so heavily lined with trees that they met side by side and even arched over to meet in the middle of the street. Those were some scary walks home. The story is truly an all time classic.

“Where Angels Fear” by Manly Wade Wellman actually gave me nightmares back then. These days, Manly Wade Wellman is mostly remembered for his Silver John tales, which happen to still be in print. He also wrote dozens upon dozens of other regional horror stories that are very hard to come by.

“Angels” take place in the Appalachian area of North Carolina and tells of what befalls two ghost hunters who decide to spend the night in a suicide/murder house.

The story has one of the most awfully messed up endings ever! It pretty much lets you know that you should be extremely careful when picking a spot to sleep in.

“Levitation” by Joseph Payne Brennan was another doozy of a story to mess with a 10 year old kid’s mind. It is also a teaching story.

What does it teach us? Be polite, never heckle a hypnotist, and make sure he stays alive long enough to wake you back up from the trance! I just know that that hypnotized guy is still floating around somewhere out there.

“In the Vault” is not only one of Mr. Lovecraft’s best non-Mythos stories; it is simply one of his best stories, period. It’s a lovely black comedy that could have starred Vincent Price under the direction of Roger Corman.

A greedy and stingy undertaker finally ends up cheating the wrong dead guy and ends up being locked in a vault with him overnight. The poetic justice ending appealed to me so very much back then. Even if you know HPL inside and out, this is still worth rereading every couple of years.

Robert Bloch’s “The Man who collected Poe” takes obsessive book collecting, the cult of personality and the black arts to their logical end. Not as much scary as it is creepy in an EC Comics kind of way. But then, I never read a Robert Bloch story that I didn’t enjoy on one level or another. 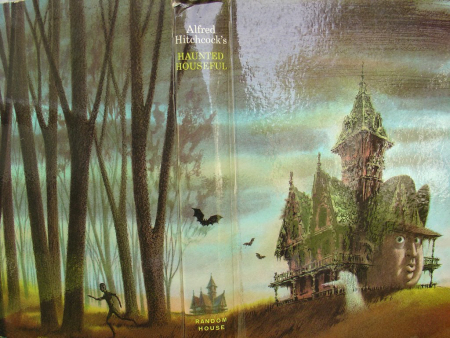 “The Whistling Room” is one of William Hope Hodgson’s Carnacki the Ghost Finder stories. Carnacki was an Edwardian ghostbuster invented by Hodgson for a series of stories when he wasn’t busy writing about proto-Lovecraftian nautical horrors.

It seems that an acquaintance of Mr. Carnacki needs help solving the mystery of a horrible whistling emitting from a room in his country estate. Everyone who tries to spend the night there dies horribly.

This story has the strangest ghost that I’ve ever read about. And as ridiculous as it turns out to be, Hodgson manages to still make it scary and pulls it all off with a straight face.

The Carnacki stories are also still in print. They are well worth checking out.

Well, I had better close before this post becomes a doctoral thesis. Hauntings is a wonderful collection that is well worth seeking out. You can find it on Abebooks for a very reasonable price.

Every story is a winner. Every single one of them! The stories I covered are simply those that made such an impression on me, that even after 41+ years I can still vividly recall the plots.

I still own and treasure a copy of this book. Any efforts you make to find it will be well rewarded. This is truly a must-have collection no matter how old or jaded you’ve become.

Hauntings: Tales of the Supernatural was edited by Henry Mazzeo, with drawings by Edward Gorey. It was published in 1968 by Doubleday.

Introduction: The Castle of Terror by Henry Mazzeo
The Lonesome Place by August Derleth
In the Vault by H. P. Lovecraft
The Man Who Collected Poe by Robert Bloch
Where Angels Fear by Manly Wade Wellman
Lot No. 249 by Sir Arthur Conan Doyle
The Haunted Dolls’ House by M. R. James
The Open Door by Mrs. Oliphant
Thus I Refute Beelzy by John Collier
Levitation by Joseph Payne Brennan
The Ghostly Rental by Henry James
The Face by E. F. Benson
The Whistling Room by William Hope Hodgson
The Grey Ones by J. B. Priestley
The Stolen Body by H. G. Wells
The Red Lodge by H. Russell Wakefield
The Visiting Star by Robert Aickman
Midnight Express by Alfred Noyes

All illustrations by Edward Gorey

Douglas Draa grew up in the small town of Newark Ohio, the real world counterpart to Gary Braunbeck’s Cedar Hill. He met his wife while stationed in Germany in the army, and now lives in Nuremberg. He’s an Electronics Technician by day, and at night works at the Nuremberg Public Observatory. He’s been a Guest Lecturer at the Ansbach University of Applied Sciences and at the German-American Institute in Nuremberg. He tells us he maintains his own blog, Uncle Doug’s Bunker, “out of love, enthusiasm, and because I’m kind of an oddball.”

[…] example, was one of the most popular in June (#4 on our Top 50 list), and his Vintage piece on Hauntings: Tales of the Supernatural was […]

[…] a few times here on the Black Gate blog, most recently in Douglas Draa’s review of Hauntings: Tales of the Supernatural, and in the discussion surrounding Robert E. Howard’s The People of the Black […]

[…] to time, including Otto Penzler’s magnificent The Vampire Archives and Henry Mazzeo’s Hauntings: Tales of the Supernatural), and that’s probably an […]

Many thanks for this review! I found this book second-hand not long ago, and this review makes me even more eager to read it. I like the way you tell just enough about each story to convey the idea, without giving away the plot.