I recently bought a small collection of The Original Science Fiction Stories, a 1950s digest magazine that lasted for only 36 issues. I paid $18 for a dozen issues (including shipping), which was more than I usually pay for SF digests — but still a bargain, especially considering the great shape they were in. I was willing to pay a little more because I’ve had a hard time finding copies. Analog, Galaxy, F&SF — they’re all pretty easy to obtain in the same vintage. But Original Science Fiction Stories has done a good job of eluding me.

When they finally arrived, I was immediately struck by the cover art. It was vibrantly colorful and frequently gorgeous. But more than that, it was downright playful. Most SF magazines of the era took themselves very, very seriously, with intrepid, square-jawed explorers and sleek spaceships on their covers. But The Original Science Fiction Stories featured much more prosaic images, frequently showcasing less-than-heroic characters. They featured very ordinary-looking space pioneers reacting to an alien earthquake, a man on a remote planet hiding from a door-to-door salesmen, and a space-suited explorer dealing with an unexpected alien threat — a bird pecking at his air hose (all images above by Emsh).

The Original Science Fiction Stories is kind of a wonky name for a magazine. I mean, what’s so original about them? For years I thought it had to be a reprint mag, bringing classic SF and fantasy from the early pulps back into print in the mid-50s. But nope, its fiction was appearing for the first time.

To understand the title, you have to trace its history back to Science Fiction, a pulp magazine that first appeared in March 1939 (above left; cover by Frank R. Paul). Science Fiction was published by Louis Silberkleit, an ex-employee of Hugo Gernsback. Silberkleit started his own publishing company and decided to launch an SF magazine to accompany his other titles, and asked Gernsback to recommend an editor. Gernsback  suggested the young Charles Hornig, who had edited Wonder Stories for him from 1933-36, starting when Horning was just 17 years old (and still in high school). By 1939, Horning was a seasoned veteran, getting on in years at 23.

Science Fiction Stories magazine eventually folded in 1943 due to wartime paper shortages, but a decade later Silberkleit experimented with reviving it as a digest, at the height of the 50s SF boom. The first issue of the new incarnation appeared in June 1953 (above center, art by Alex Schomburg), published with no number and no date. A second appeared a year later. Both were successful, so Silberkleit renamed his ongoing pulp magazine Future Science Fiction to Science Fiction Stories and changed it to a digest. The first issue in the new format appeared in January 1955 (above right, cover by Emsh), edited by Robert W. Lowndes.

The early covers of Science Fiction Stories weren’t typical of their later playful appearance; they looked just like every other SF magazines on the racks. That isn’t to say they didn’t have some shining moments, however. I particularly liked the mysterious and menacing cover of the March 1955 issue (above left, art by Emsh), in which we see only the shadows of the approaching aliens… our intrepid explorers experience the full monty however, and don’t seem entirely reassured by what they see.

Changes were in the wind with the very next issue, however. To reduce fan confusion resulting from the sudden name change from Future to Science Fiction, Silberkleit changed the title again, this time to The Original Science Fiction Stories, in an attempt to make the connection with the original 1940s pulp version more clear. It didn’t work; fans remained confused, but the magazine soldiered on.

There was another major change with the subsequent issue: after illustrating every issue of the magazine for a year, Emsh finally had some relief. There aren’t many artists who could fill his shoes, but the talented Frank Kelly Freas was certainly one. For the cover of the November 1955 issue, Freas contributed a gorgeously colorful post-apocalyptic piece illustrating Simak’s “Full Cycle” (above right.)

Silberkleit re-used Freas’s cover for the March 1959 issue of Double-Action Detective and Mystery Stories — although, as Bill Crider has pointed out, it may well have been the other way around, as the cover is a better fit with “The Doomsday Book Murders,” the Calvin M. Knox (Robert Silverberg) story in Double-Action Detective.

Emsh, Freas, Paul Orban, Virgil Finaly and others provided the interior artwork, which was frequently a little more risque than the covers. The Kelly Freas piece above left illustrated “Quest” by Manly Banister (November 1957), a terrible story about a man raised by robots on an alien world who searches the galaxy for others of his kind, only to discover that humans come in two models: male and female. On a strange world, he stumbles on a woman out riding, trying to escape the attentions of an unwanted suitor; she is knocked unconscious after being thrown from her horse. He’s entirely confused when he undresses her to make sure she’s not injured, and she’s none too happy when she wakes up, either. One thing leads to another, the  unwanted suitor shows up, fists fly, our hero proves himself a capable fighter, and our heroine discovers a man she can love after all. The End.

The best thing about this story is unquestionably the Freas artwork, which beautifully captures our hero’s confusion and the far more knowing gaze of Alur the robot, the most intelligent character in the story (by a wide margin.)

The theme of robotic lust shows up about as often as you’d expect in a 1950s SF magazine. The middle piece above is Emsh’s illustration for Basil Wells’ tale “Utility Girl,” accompanied by the caption “She had forgotten one thing about Zeke…” Women of virtue, it pays to remember: modest clothing around male robots, please.

It wasn’t all scantily clad women in the pages of The Original Science Fiction Stories. The beautiful piece at right is Frank Kelly Freas’s full-page illo for “Homecoming,” the tale of a little girl who finds a very unusual bug in an alien forest.

Emsh was back on the cover for the July 1956 issue, with a very Richard-Powers like cover illustrating Fred Pohl’s “Wapshot’s Demons.”

Emsh executed a series of excellent covers for the magazine over the next few years, including the captivating November 1956 issue (above center), and a really splendid action piece for the May 1957 issue (right), illustrating a killer sun surging over the horizon.

It was Emsh’s playfulness and humor that eventually became the signature of the magazine. One of his finest examples was the September 1957 cover (above left). The grinning features of the teen joyrider, and the furious general scolding him (together with the instruction books tucked under the dash, including “How to Pilot a Space Ship”) told the complete tale.

The covers for Original Science Fiction Stories weren’t all sight gags, like the joyriding teen and the door-to-door salesman in space. Kelly Freas contributed a beautifully coloful cover for the March 1958 issue (center), and his enigmatic cover for the August 1958 issue (right), illustrating Silverberg’s “The Four,” was suitably eye-catching.

Towards the end of its run in the late 50s, The Original Science Fiction Stories more or less abandoned the playful gags on the cover, which was a shame. But it still delivered some effective and unusual covers.

Above are three examples: Emsh’s take on the popular theme of the flying saucer menace (September 1958, left, illustrating Thomas N. Scortia’s “The Avengers”), his cover for Ward Moore and Robert Bradford’s serialized novel Caduceus Wild (center, January 1959) and the bizarrely goofy February 1959 cover (right), illustrating “Delivery Guaranteed” by Calvin M. Knox (Robert Silverberg). I have no idea if this scene is in the story, and I really don’t care; I love it anyway.

Caduceus Wild was notable for another reason: editor Lowndes managed to lure the great Virgil Finlay to the magazine to illustrate each of its four parts. Here are two samples.

The Original Science Fiction Stories ceased publication with the May, 1960 issue.

A year before it did, it abandoned full color cover art entirely, replacing it with black and white spot illos showcasing more of the contents. I strongly suspect this was not a measured design choice, but more a matter of budget — likely the cover was the most expensive part of the magazine, easily eclipsing any of the fiction. I don’t consider the covers during this period to be total failures, but nonetheless they are less worthy of our attention. Here’s a group shot of all ten of the last issues (click for bigger version). 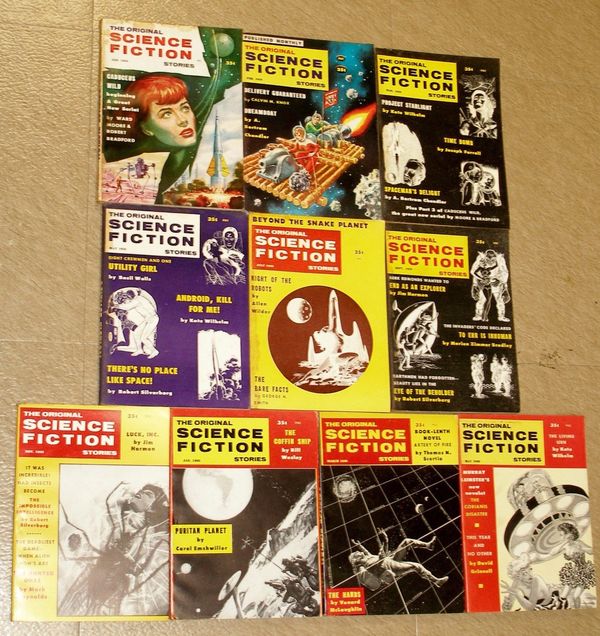 Finally, here’s the dozen issues I paid $18 for. I’ll be reading through them for the next few weeks, sampling different stories and enjoying the interior artwork. If I find anything extraordinary, I’ll let you know. 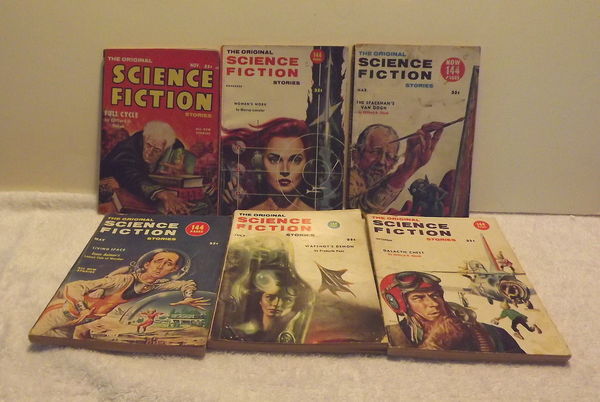 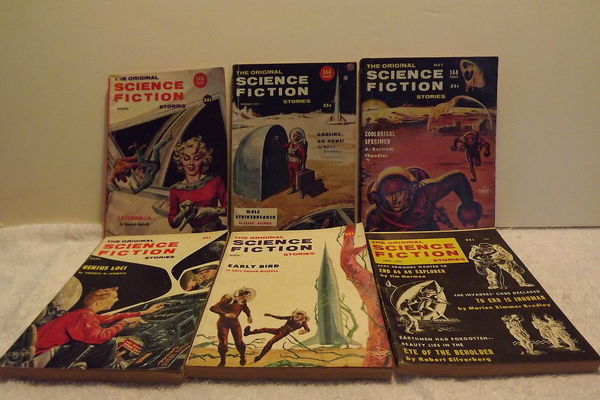 […] the complete article here. And thanks to Robert Silverberg for being gracious enough to solve those mysteries for […]