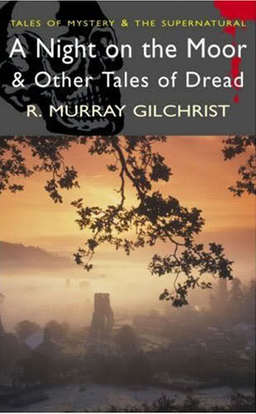 It’s probably no surprise that I got a new volume in the Wordsworth’s Tales of Mystery And The Supernatural series for Christmas.

I’m not familiar with R. Murray Gilchrist, but that’s the beauty of this series — it’s introduced me to a wide range of excellent ghost story writers. Gilchrist wrote chiefly in the late 1800s and he produced a fine range of supernatural ghost stories, including horror, humor, mystery, and even tragic romance. A Night on the Moor is a slender volume (at just 190 pages, it’s considerably shorter than most of the recent Wordsworth edition we’ve covered), but I’m enjoying it so far.

Robert Murray Gilchrist (1868-1917) is perhaps best known for his interest in topography, and for his stories set in Derbyshire’s Peak District. But he was also a master of mystery and horror, as this richly varied collection shows.

If you are looking for a conventional horror story, in which the supernatural element is paramount, try “The Crimson Weaver,” “Dame Inowslad,” “Witch In-Grain,” or “A Night on the Moor.” If you are more taken with the psychology of the participants, often allied to a fascination with the killing of friends or lovers, then “Francis Shackerley,” “The Noble Courtesan,” “Althea Swathmore,” and “My Friend” will be right up your street. For humor we are offered the Peakland comedy of “The Panicle” or “A Witch in the Peak.” And when it comes to love, there are the tragic and poignant tales we might expect (“The Return,” “The Lost Mistress,” “The Madness of Betty Hooton”), but also the engaging and unusual “Bubble Magic” — a story of romantic betrayal which hints at a happy ending.

We’ve covered a dozen volumes in the Wordsworth Tales of Mystery And The Supernatural series so far:

Scottish Ghost Stories, selected by Rosemary Gray
The Crimson Blind and Other Stories by H.D. Everett
Couching at the Door by D.K. Broster
The Casebook of Carnacki The Ghost Finder by William Hope Hodgson
The Beast with Five Fingers by W.F. Harvey
The Power of Darkness — Tales of Terror, by Edith Nesbit
Alice and Claude Askew’s Aylmer Vance, The Ghost-Seer
The Black Veil & Other Tales of Supernatural Sleuths edited by Mark Valentine
Voodoo Tales: The Ghost Stories of Henry S. Whitehead
Sherlock Holmes: The Game’s Afoot, edited by David Stuart Davies
The Casebook of Sexton Blake, edited by David Stuart Davies

A Night on the Moor & Other Tales of Dread was published in the UK by Wordsworth Editions on November 10, 2006. It is 190 pages, priced at $7.99 in paperback. There is no digital edition, but the book is still in print.