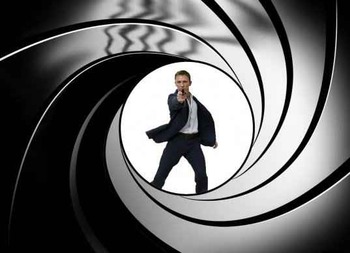 News that the character of James Bond entered the public domain in several countries around the world, including Canada, on January 1st 2015, has stirred considerable excitement among small press publishers.

As io9 reported on Thursday, for many countries who signed the international Berne Convention governing copyright, an author’s works are protected until 50 years after her death. Ian Fleming died in 1964, which means his work entered the public domain this year. Fleming’s original novels can now be published by anyone in Canada, and new film adaptions of those works are fair game.

Canadian publishers such as Neil Baker’s April Moon Books, who recently produced the popular anthologies The Dark Rites of Cthulhu and Amok!, are exploring what this means to those interested in producing new Bond-related books and anthologies. Here’s Neil:

Here is what I know so far. The name James Bond is currently not trademarked, and it wouldn’t be an issue if it was. However, James Bond OO7 is trademarked, and would cause a kerfuffle. The movies are off-limits, so no fluffy white cats or Q. Movie versions of James are off-limits, as is SPECTRE and, to some extent, villains using nuclear threats. It’s all a bit murky, but I’m still digging.

I’m trying to clarify the position of writers outside of Canada, bear with me on this.

Keep up with developments on the April Moon Facebook page.

I told my husband about this as we drove home from our date-night viewing of the final Hobbit film. We’d been lamenting about the added fanfic subplots of the film, so in light of this news from Canada, Dan said with some glee, “You’re telling me that soon we can look forward to more fanfic films of James Bond, Frodo Baggins, and Legolas…all together?”

Put James Bond and Legolas in a film together, and heck, throw in Chuck Norris while you’re at it, and my money’s still on Legolas.

I like the 50-year timeframe of the Berne Convention.

I know that many book publishers, music companies, and movie studios have pushed through new extensions in countries including the U.S., but to me, 50 years after a person is dead seems enough. At that point you’re, what, two generations removed? — so we’re talking about a person’s great grandchildren, at least in theory.

Makes me want to go pen a Sherlock Holmes or John Carter story right now (I’ve never been a huge Bond buff) — and screw off, Disney!

Dan sounds like he has the makings of a fine editor. Get him a desk!

I know it’s popular to badmouth greedy corporations, but I think part of the reason for extending copyright in the US was actually in the belief that it would help keep some books in print.

Del Rey, for example, did very handsome paperback editions of Edgar Rice Burroughs Mars books (with later covers by Michael Whelan) in the 60s, 70s and 80s. They spent a lot of money advertising the books, and kept them in print for decades.

If there had been cheap knock-off paperbacks available of the same titles, I doubt Del Rey would have bothered making that investment. They did it because they knew they’d have a nice, small, predictable return over many years. Take away copyright protection, and all that goes away.

I know there are counter examples on both sides. But I do believe that, in many cases, copyright has made it simpler and easier for publishers to invest in reprinting a dead writer’s work.