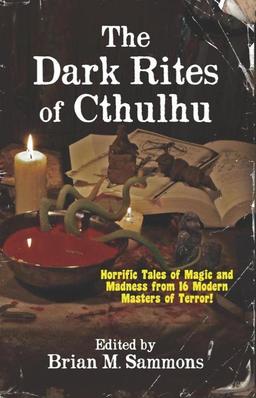 I first met Neil Baker over a decade ago and was surprised by how much we had in common, including our shared love of genre films. He told vastly more entertaining stories than I did — especially his tales of the British film industry, and working on films like Lifeforce. So I wasn’t at all surprised when he told me late last year that he was joining the noble and distinguished brotherhood of small press publishers.

In an article for Black Gate last month, Neil told us that his first release, The Dark Rites of Cthulhu, was a collection of stories dealing with “the more magical aspects of Lovecraft’s tales, smaller, more intimate stories that explored the consequences of humans meddling in powers beyond their understanding.” In a marketplace crowded with a multitude of Cthulhu volumes, this one stands out, with terrific reviews, fabulous design, and excellent interior art by Neil himself. Here’s the book description.

For centuries, students of the forbidden arts have probed the inky recesses of the spaces inbetween. Hapless mortals have invoked monstrous entities from beyond through foul magicks, incantations and rituals. When will they learn that there can be no profit nor joy to be gained through relations with the insidious old ones? These sixteen tales of depravity, sorcery and madness may offer some illumination, but ultimately there can be no salvation for those who dabble in The Dark Rites of Cthulhu.

The Dark Rites of Cthulhu was edited by Brian M. Sammons and published by April Moon Books on March 28, 2014. It is 224 pages, priced at $18.99 in trade paperback and just $2.99 for the digital version. Buy it directly from the April Moon website. It gets our highest recommendation.

OT, but if you see this today John, Amazon has four great sci-fi fantasy books, including two from Delaney, on sale for $1.99 each as their Kindle Daily Deals.

I haven’t seen you do a “deals” post in a while, but there is some great reading in those four books. (And not their usual Kindle Daily Deals of Amazon published stuff. True, Wool and its sequels are outstanding, but other than that you’re on your own.)

[…] Black Gate has some brief comments about The Dark Rites of Cthulhu, edited by Brian M. Sammons. […]

[…] fine folks at April Moon Press have really hit the ground running. Their first anthology, The Dark Rites of Cthulhu, appeared in March and was a major success — so much so that they’ve now launched an […]

[…] Moon Books released Brian M. Sammons’s terrific anthology The Dark Rites of Cthulhu back in May, so when I heard word of his newest, World War Cthulhu, edited with Glynn Owen Barrass, […]

[…] such as Neil Baker’s April Moon Books, who recently produced the popular anthologies The Dark Rites of Cthulhu and Amok!, are exploring what this means to those interested in producing new Bond-related books […]

[…] two of the most innovative — and frankly, most fun — anthologies of the past year, The Dark Rites of Cthulhu and Amok! Editor Neil Baker explains the concept at the heart of their newest release in his […]