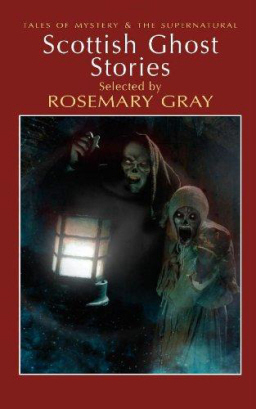 Well, I’ve finally found the perfect book to curl up with on Christmas Eve  — and of course, it’s another volume in Wordsworth’s Tales of Mystery And The Supernatural.

Scottish Ghost Stories, selected by Rosemary Gray, is a generous collection of 34 classic tales by John Buchan, George MacDonald, Sir Walter Scott, Robert Louis Stevenson, and many others. Explore the haunted highlands of Scotland by candlelight, while waiting for Santa to arrive. And if it turns out you haven’t been good, well… all that coal will be useful, to help ward off the chills.

Scotland has a notoriously rich and diverse cultural tradition when it comes to the supernatural. Many of her greatest writers from Sir Walter Scott and James Hogg to Robert Louis Stevenson and John Buchan have explored the country’s unique folkloric heritage to spine-chilling effect. From Highlands to Lowlands, from blasted heath or remote glen to wretched hovel or austere castle, the very topography lends itself somehow to the strange and unexplainable.

Leading off Edinburgh’s colorful Royal Mile, which runs from the Palace of Holyrood to the gaunt castle on the rock, there are many narrow ‘wynds’ — passages ancient and mysterious. As soon as you leave the sunshine and enter these dark and reeking ways you know that you are in a city full of ghosts and spirits — unhappy souls condemned for ever to roam this antique city.

Tormented spectres like them throng the pages of this disquieting collection. Lock your door, turn up the lights, put extra logs on the fire and as you start to read utter a fervent prayer. From ghoulies and ghosties And long-leggety beasties And things that go bump in the night, Good Lord, deliver us!

We’ve covered ten other volumes in the Wordsworth Tales of Mystery And The Supernatural series so far:

Scottish Ghost Stories was published in the UK by Wordsworth Editions on February 5, 2009. It is 623 pages, priced at $7.99 in paperback. There is no digital edition, but the book is still in print.