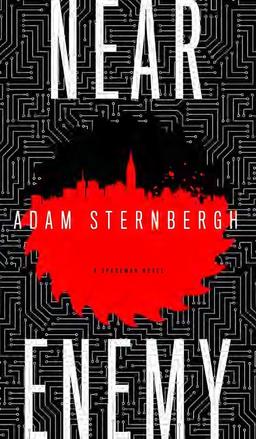 Adam Sternbergh’s debut novel Shovel Ready (which I just covered below a few minutes ago) is now being marketed as part of a series (Shovel Ready: A Spademan Novel). Usually that means more than one book is involved and a little digging last night turned up a sequel: Near Enemy, coming next month.

This one features a job gone wrong, terrorists, Egyptian radicals, and underhanded New York politics. Looks like I’ll have to add this one to the pile.

New York is toxic — decimated by a dirty bomb years ago. The limnosphere is a virtual safe haven — if you’re rich enough to buy in. Spademan is a hit man — box-cutter at the ready.

His latest job is to snuff out Lesser, a lowlife lurking around other people’s fantasies. As Spademan is about to close the deal, Lesser comes back from the limn with a wild claim: terrorists are planning to attack New York. Again. This time from the inside out.

The warning sends Spademan down a dark path full of unsavory characters and startling revelations. A shadowy political fixer tells him of a long-running power struggle that goes all the way to City Hall. A brilliant Egyptian radical brings Spademan to the mysterious far-reaches of the limn. And a beautiful nurse holds the secret to what, and who, is behind these attacks — and she seems to want to help Spademan stop them. But he works best alone. Or so he thinks.

Spademan has always had his share of enemies, but now they’re coming at him from all sides and it’s impossible to know whom to trust. To stay sharp, his only option might be the one thing he swore he’d never do again.