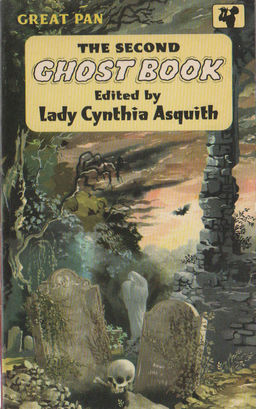 That’s not remotely true of British paperbacks. Take for example the highly regarded Pan Ghost Books. They were published between 1952 and 1980, and there are a lot of them. How many? I have no idea. A lot.

The first, originally titled The Ghost Book, was published in hardcover from Hutchinson in 1926, and didn’t appear in paperback until 1945. The Second Ghost Book had a hardcover edition in 1952 from James Barrie, and was reprinted in paperback by Pan (under the imprint Great Pan) in 1956. If things had continued at that pace, we wouldn’t have much of a series to talk about, but fortunately they picked up a bit, with the third appearing in hardcover in 1955.

The books were a mix of original fiction and reprints. All three of the first Pan Book of Ghost Stories were edited by Lady Cynthia Asquith, who was also a contributor (under the name Cynthia Asquith.) The fourth volume was edited by James Turner; altogether the series had half a dozen editors by the time it petered out in 1980.

My first encounter with the series was with The Bumper Book of Ghost Stories, a fat omnibus of two later volumes, which I found at the Windy City Pulp & Paper show last year. That was enough to set me on the trail of the earlier volumes. I recently stumbled across a copy of the The Second Ghost Book, and it’s got a stellar list of contributors, including V. S. Pritchett, Lord Dunsany, Elizabeth Bowen, L. P. Hartley, and many others. It’s also got a fabulous cover.

I’m taking my first step into a wider world with this book, as even a cursory glance at British horror in the 50s and 60s reveals a tantalizing range of paperback anthologies from Pan, Fontana, and others. But this one looks like a great place to start.

Here’s the complete table of contents for The Second Ghost Book (reprints noted with the original publication date.)

Introduction by Elizabeth Bowen
“A Story of Don Juan” by V. S. Pritchett (1941)
“Autumn Cricket”by Lord Dunsany (1950)
“Back to the Beginning” by John Connell
“Bombers’ Night” by Evelyn Fabyan
“Captain Dalgety Returns” by Laurence Whistler
“Christmas Meeting” by Rosemary Timperley
“Danse Macabre” by L. A. G. Strong (1949)
“Hand in Glove” by Elizabeth Bowen
“One Grave Too Few” by Cynthia Asquith
“Possession on Completion” by Collin Brooks
“Spooner” by Eleanor Farjeon
“The Amethyst Cross” by Mary Fitt
“The Bewilderment of Snake McKoy” by Nancy Spain
“The Chelsea Cat” by C. H. B. Kitchin
“The Guardian” by Walter de la Mare
“The Lass With the Delicate Air” by Eileen Bigland
“The Memoirs of a Ghost” by G. W. Stonier
“The Restless Rest-House” by Jonathan Curling
“W. S.” by L. P. Hartley
“Whitewash” by Rose Macaulay

The Second Ghost Book was originally published in hardcover by James Barrie in 1952, and reprinted by Pan Books in 1956. It is 223 pages, priced at “2/-” (whatever that means) in paperback. The marvelously moody cover is by Val Biro.

You can’t go wrong with a horror endorsement from Good Housekeeping.

You know they didn’t give those to horror anthologies very often.

To me, it is the ultimate cover. My father possessed a copy of this when I was a child in the 60s and I used to sneak a look every so often. Gave me the shivers every time. Years later, I picked up a copy. Any other edition would just not do. Bit of a ruin, bat, gnarly tree, ghost in a sheet, skull chomping on a bone and that gravestone on the left with the suggestion of a rather cheery face at the top. Neil

I agree completely. Your appreciation of this kind of art will depend greatly on what generation you’re from, but for me, this old-school horror art speaks to me of ruined castles and classic scares. It brings me back to the great horror tales of my youth, and that doesn’t happen very often these days.

Do you know anything about the publishers of Great Pan Books? I have my cheerful guesses about people who might name their press Great Pan in the 1950s, but the internet doesn’t seem to know anything much about them…or maybe it’s just not telling.

Great Pan was as much a marketing ploy as anything. Pan books were a big popular paperback publishing firm in the 50s and 60s in the UK. The imprint is still around but they were taken over by MacMillan and are now known as Pan MacMillan. I suspect they added “Great” either to certain titles they particularly wanted to push or it was just a name change which they subsequently dropped. For what it’s worth, there is a Wikipedia article about Pan and Pan MacMillan have their own website. Wikipedia reckon that their logo was designed by Mervyn Peake – I’d love to know if that’s true! Neil

Neil is correct… Pan didn’t publish under the name “Great Pan” for very long, but you can find a few examples online.

Pan was (is?) a very popular British paperback publisher. I used to run across their titles in Canada all the time when I was growing up.