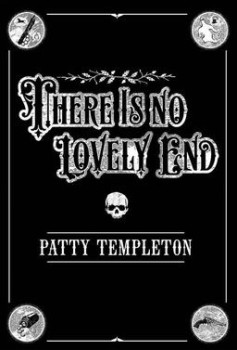 Regular readers of Black Gate will no doubt have noticed the return of infrequent interviewer Patty Templeton. For those who were wondering why Ms. Templeton wasn’t conducting more of her fantastic interviews with an eclectic rogues gallery of writers, the reason was, quite simply, that she was too busy writing a novel of her own. There Is No Lovely End was published back in July and has been garnering universally positive reviews. Here’s another one.

The book starts in pre-Civil War America and follows the lives of several seemingly unrelated characters whose lives will all eventually come crashing together in one disastrous night. Not all of these characters will survive to the end. In fact, one of them dies very early in the story, but continues to move events forward as a ghost. These early chapters can be a bit disorienting as the reader jumps from one subplot to another, each with its own main character and supporting cast. But once you get a feel for each character, the jumping about is much easier to follow and gives the story a frantic pace (which would otherwise be difficult, considering that it takes place over a 32-year period).

Hennet Daniels has undertaken a decades-long hunt for the medicine man who inadvertently poisoned his brother. Sarah Pardee is coping as best she can with a loveless marriage to a man who cares more about his dead daughter than his living wife. Graham Johnson is a suicidal newsman who falls hopelessly in love with a remorseless psychopath. Hester Garlan is a remorseless psychopath, searching for the lost son whom she believes has stolen her psychic abilities. Nathan Garlan is a young man trying to cope with his ability to speak with the dead.

Perhaps the biggest problem I have with the book is not in the story itself, but in the back cover copy, which inadvertently gives away far too much of the final chapters. The story ends in the 1884 showdown, but 80% of it is the manic build-up to the event, where these disparate characters slowly make their ways there through a variety of routes.

Patty* does a great job of not only making each character distinctive, but also making the world they inhabit a vibrant place filled with dark mysteries. This works best with the Watchbird Theater, whose seemingly endless backrooms house all manner of curious performers (and which might be a living thing in its own right). We learn just enough about the Reverend Doctor Enton Blake’s traveling medicine show that we probably wouldn’t mind spending an entire novel with him and his supporting cast of haints. In fact, the only point when this depth of environment misfires is in the mysterious inner world of the Westerley Brothers used book shop, which gets abandoned very shortly after it’s introduced. Based on the ending of this novel, it’s not clear if a series is being planned. The story ties up surprisingly well (given the number of threads), but there’s certainly room for further exploration, even if the reader does know how all of the key players end up.

There Is No Lovely End is a Victorian era ghost story done with a decidedly punk sensibility, a wonderful debut from a new voice in whatever subgenre of fantasy it’s inventing. It was published on July 2nd of this year and is available in print for $13.56 and as an e-book for $4.99 from Amazon. And if this review isn’t enough to convince you, check out the trailer.

* Of course I know her. We both work for the same website. So I’m not going to fake professional detachment by calling her “Templeton.”

[…] literally rubbed it in my face, as friends do. Now she’s gone and published her first novel, There Is No Lovely End, which contains outlaws, ghosts, curses, buildings that live, and a buckshot spray of other ghastly […]