“Calvin M. Knox” is one of Robert Silverberg’s most well-known pseudonyms. He used it extensively to write reviews, over two dozen short stories (frequently in magazines where he also had a story under his own name), and three novels: Lest We Forget Thee, Earth (1958), The Plot Against Earth (1959), and One of Our Asteroids is Missing (1964), all Ace Doubles.

Milton Lesser was born in Brooklyn in 1928, and changed his name to Stephen Marlowe in 1956. Under that name he wrote 40 crime novels and fictional autobiographies. He began publishing SF under his original name while still a teenager, and he continued to to do so through the 50s and 60s, producing seven novels and nearly 100 short stories between 1950 and 1965.

Silverberg and Lesser were published back-to-back in Ace Double D-358 in 1959, with the novels The Plot Against Earth and Recruit for Andromeda. The latter has never been reprinted, and has now been out of print for over 55 years.

Rich Horton reviewed both novels as part of his ongoing series of Ace Double reviews at his blog Strange at Ecbatan. Here’s what he said, in part:

Recruit for Andromeda is rather a mess of a novel, haring off in a few different directions to no particular ultimate result. It opens presenting an idea reminiscent of that in Silverberg’s The Seed of Earth… a lottery to select people for mandatory space travel. We meet Kit Temple and his girlfriend Stephanie — it’s Kit’s last year of eligibility. No one has ever returned from the “trip to Nowhere” (including Kit’s brother): but Kit is chosen as well…

Kit soon leaves (after one night of passion with Stephanie), and during his training he makes friends with the fake Alaric Arkalion III… All then head to Mars, and then the mysterious trip to “Nowhere,” via some sort of matter transmitter… they find a somewhat flourishing planet, full of aliens of all sorts of species, and they learn that the whole shebang is hosted by an ancient race, nearly extinct, that wishes to choose the most worthy possible race to succeed them… It reads like three or four short story ideas mashed together, and not all that successfully…

Robert Silverberg was far more prolific in the mid to late ’50s… The Plot Against Earth is typical, and indeed not really early Silverberg at early Silverberg’s best. The hero is Lloyd Catton, an Earthman who has been sent to Morilar, home of the Interworld Commission on Crime, ostensibly to join a pan-Species investigation of the illicit traffic in hypnojewels. Catton’s real mission is to ferret out the presumed plot by the three leading humanoid species, the Morilaru, Skorg, and Arennadilak, against the upstart Terrans. Catton, using time-honored human private eye methods, quickly tracks down a major center of hypnojewel smuggling. He also encounters the daughter of the Terran Ambassador, who confesses she wants to run away with her lover, a Morilaru man, and can Catton check this Morilaru out?..

Silverberg being Silverberg — never less than a pro — this crackles along well enough. But it’s not much of a novel, really, either as SF or as a crime novel. 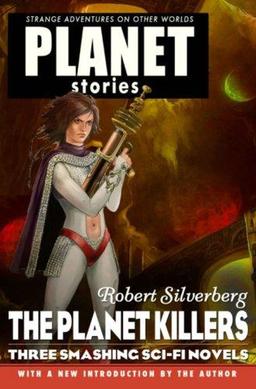 While Recruit for Andromeda has never been reprinted, The Plot Against Earth was included in The Planet Killers, a 400-page omnibus volume released by Paizo as #32 in their Planet Stories line in May 2011. It contained three complete novels, along with a new introduction by Silverberg:

The Plot Against Earth is also available as an ebook from Open Road Media for $7.99.

The Plot Against Earth/Recruit for Andromeda was published by Ace Books in 1959. It is 138 + 117 pages, priced at 35 cents. The covers are by Ed Emshwiller and Ed Valigursky, respectively.

Warlord of Kor/The Star Wasps by Terry Carr and Robert Moore Williams
The Sun Saboteurs/The Light of Lilith by Damon Knight and G. McDonald Wallis
Wandl the Invader/I Speak For Earth by Ray Cummings and Keith Woodcott (John Brunner)
The Sioux Spaceman/ And Then the Town Took Off by Andre Norton and Richard Wilson
Secret of the Lost Race/ One Against Herculum by Andre Norton and Jerry Sohl
Clockwork’s Pirates/Ghost Breaker by Ron Goulart
ATTA/ The Brain-Stealers by Francis Rufus Bellamy and Murray Leinster
The Ship from Atlantis/ The Stolen Sun by H. Warner Munn and Emil Petaja
Vulcan’s Hammer / The Skynappers by Philip K. Dick and John Brunner
The Ship That Sailed the Time Stream by G.C. Edmondson
Bow Down to Nul / The Dark Destroyers by Brian W. Aldiss and Manly Wade Wellman
Gateway to Elsewhere / The Weapon Shops of Isher by Murray Leinster and A. E. van Vogt
The Cosmic Puppets / Sargasso of Space by Philip K. Dick and Andre Norton
The Beast Master / Star Hunter by Andre Norton
Big Planet by Jack Vance
City Under the Sea by Kenneth Bulmer
The Forgotten Planet (Planets of Adventure) by Murray Leinster
Six Worlds Yonder / The Space Willies by Eric Frank Russell
Sentinels of Space / The Ultimate Invader by Eric Frank Russell and Donald Wollheim
Ring Around the Sun/ Cosmic Manhunt by Clifford D. Simak and L. Sprague de Camp
The Trouble With Tycho/ Bring Back Yesterday by Clifford D. Simak and A. Bertram Chandler
The Last Planet (Star Rangers) by Andre Norton
A Touch of Infinity/ The Man With Nine Lives by Harlan Ellison
Kirkus Looks at Donald A. Wollheim and the Ace Double
Tales of Outer Space/ Adventures in the Far Future edited by Donald A. Wollheim
The Pirates of Zan by Murray Leinster

I have this one, but I’ve never read it. As every collector of Ace Doubles knows, it’s a dicey proposition actually reading the books. (Though there were some very fine books published in the format, along with a lot of…well, you know.) But if you just take them off the shelf and gaze lovingly at the wonderful pulp-imagery filled covers, you can’t lose!

True enough. Many of these novels haven’t aged well at all (and many weren’t all that memorable, even in the 50s!) But the artwork of Ed Emshwiller and Ed Valigursky just seems to look better and better as years go by.

Your comment made me realize I hadn’t credited Emsh and Valigursky in my article, and as I was rectifying that, I discovered that The Plot Against Earth was included in The Planet Killers, a big omnibus volume from Planet Stories 2011. I added that to the article above (together with the cover credits)… so thanks for the comment! It helped make the post considerably better. 🙂

Very good point Thomas,
“Thankfully” my growing Ace Double collection generallly lists books that are so battered that giving them a read will hardly diminsih their value further, so I feel relativly safe for now. But a good habit to be in is when buying an Ace double, to check akll the pages are present.